Alright sports fans!  Get ready for two titanic tussles of epic proportions!  First up, we have the Ragin' Cajun taking on the Star Spangled Avenger!  But that's just a warm up for our main event, which features our favourite Wondrous Webspinner taking on the Unstoppable, Juggernaut powered Colossus! 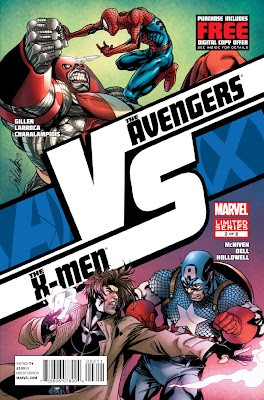 Our fighters have just met up in the lush, but dangerous jungle environment of the Savage Land!  Gambit makes the first move and tosses some kinetically charged playing cards at Cap, who easily dodges.  Looks like Cap is fighting fire with fire by throwing his shield at Gambit, who kinetically charges the shield and throws it back at Cap!  What a move!

Cap barely dodges the explosion and runs straight for Gambit, who's readying himself with his staff.  Cap moves in, breaks Gambit's staff, and pins him against a tree!  Oh man, it looks like Cap is so sure of his victory, he's chatting up Tony Stark via communicator in the middle of the fight!  Ouch!  But it looks like this bravado is going to cost Cap, as Gambit kinetically charges Cap's costume and kicks him aside just in time to watch Cap explode.  It looks like victory belongs to...

Wait!  Cap is still standing, and he's found his shield!  Cap charges at Gambit, who throws more of his exploding cards to no avail.  Gambit attempts to kick Cap, who blocks, and then floors Gambit with a solid right hook!  He's down!  Gambit is down!  That sound you heard was everyone is Louisiana balling their eyes out!

In the exotic land of Latveria, the Avengers pick their X-Men sparring partners and split off.  Unfortunately for Spider-Man, he got to pick last, and now has to face Colossus!  Colossus tries to squash the webslinger, who easily dodges and strikes back using his classic web in the eyes trick.  Spider-Man lands a series of blows on his opponent while chatting away but it looks like neither strategy is having any effect.  Looks like it's Colossus' turn, as he slams his hands together and sends Spidey flying.  Spider-Man is down, but Colossus isn't done, he grabs Spider-Man by the neck and hits him again! 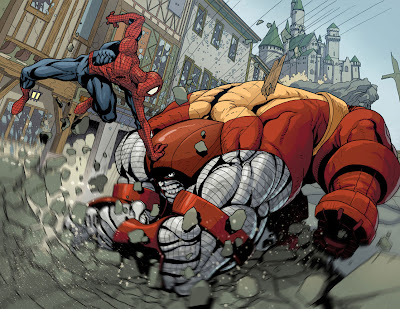 Looks like Spider-Man's still conscious and ready for mo... uh oh!  Now Colossus is tossing doombots at him!  He'll have to move fast if he's going to dodge those!  Now Spidey has grabbed one of the robots with his webbing and is throwing it back at Colossus, giving him a taste of his own... oops!  Looks like Spider-Man's strategy has backfired, as the explosion from the doombot hurt him more than it did his opponent.  Colossus is continuing his relentless assault, creating a mini earthquake that sends Spider-Man reeling.

You gotta give Marvel credit, as far as event tie-ins go, this Versus miniseries is a great idea.  Not only is it more entertaining than those dull Frontline books that accompanied their previous events, but it's also necessary, as the main Avengers vs. X-Men title has not had many fights that lasted beyond a couple of panels.

The two fights in this issue went fairly predictably.  We know Cap isn't going to lose to anybody, and that Spider-Man would never give up in the face of impossible odds.  Still, this is a very well crafted comic.  Steve McNiven's Cap/Gambit fights pops on every page while Salvador Larroca does a great job depicting the Spider-Man/Colossus fight.  Kieron Gillen does his usual bang up job with dialogue, ensuring that the Spider-Man/Colossus fight is fun to read.  And in the end, that's what this series is about: superheroes beating the crap out of each other and dumb fun.  Whether that's worth $3.99 to you is your call. 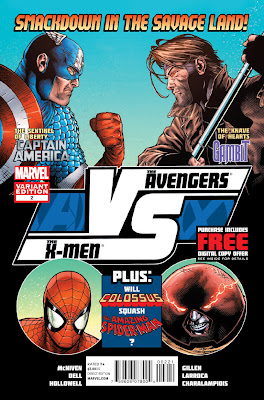