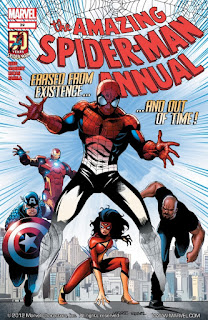 Once again, I apologize for the late review. I will try to make this one quick cause I really wanna review ASM 687 asap!

The Story
Essentially, Peter gets transported into a reality where he never existed thanks to one of Grady's experiments. At first, he notices that his driver's license is blank and the cops think he's nuts. Peter makes a run for it and changes into Spider-Man.

He notices billboards of President Jonah Jameson, Mary Jane - main character in her own show Hollywood movie, and Norman Osborn, the man who has found a cure for cancer.

Trying to fix the problem of nobody remembering him, Peter goes to Horizon labs, but denied access into Horizon labs. Later that night, it dawns upon Pete that the world is a better place without him. Trying to relax, he buys himself some ice cream, recalling that Uncle Ben used to say ice cream would solve the problem.

Suddenly, an earthquake erupts and Peter finds himself back in high school. He soon realizes that with every memory of his past, he time jumps to that particular time in history. Before he knows it, Peter time jumps to Aunt May's house and finds Uncle Ben there.

At first, Uncle Ben does not recognize him, but after going through another time jump with Peter, his memory comes back.

Meanwhile, Iron Man notices something strange after the earthquake and gathers the Avengers. The Avengers soon find Peter and catch him. Peter and Uncle Ben both try to explain.

Anyway, The Avengers eventually believe who he says he is and together they find a solution to get everyone to remember Peter. 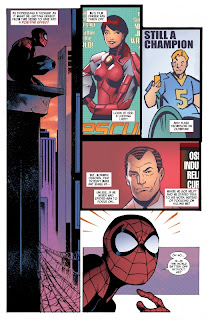 Thoughts
Honestly speaking, this was not that great an issue. Once again, we have Peter being insecure, thinking that the world is a better place without him ( even though it was). What I didn't like about the issue is that it held no gravity to canon comics. Absolutely everything that took place in that issue was not important, save for a few Uncle Ben moments with Peter.

Moral of the story is: You can do without reading this issue.

PS. There is no way the world is better without Spider-Man. I mean, which character would I have used in Marvel vs Capcom when I was a kid if it wasn't for him?!
Read More
Newer Posts Older Posts Home