The Savage Six make their debut!  The Toxin symbiote finds a familiar new host!  Venom reveals his secret identity to one of his closest friends!  All in these two jam packed issues! 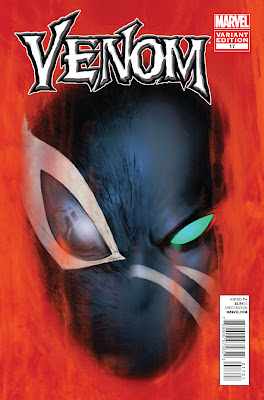 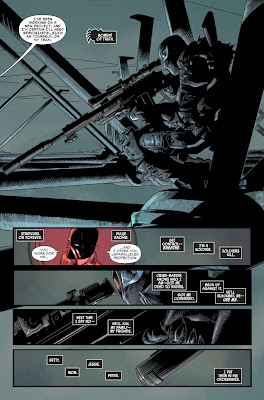 A desperate Flash Thompson decides that it's time for him to kill the Crime Master and put an end to his organization before he can destroy everyone Flash cares about.  Flash calls Hank Pym and lies to get Pym to send the symbiote via special phone, promising himself that this is the last time he uses it for personal matters.

Some time later, the Crime Master forcefully bonds the Toxin symbiote to Eddie Brock, creating the final member of the Savage Six! 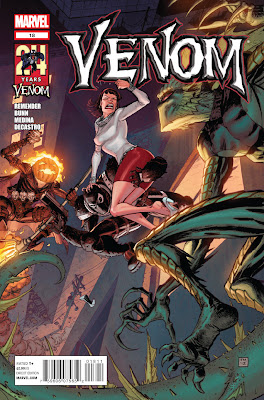 Venom arrives at Betty Brant's apartment only to find a note that says she's out with Peter Parker.  Meanwhile at a coffee shop, Betty confides in Peter about Flash, to which Peter suggests giving Flash a chance to explain himself.  After Peter leaves, Betty is confronted by Jack 'O' Lantern (out of costume) who attempts to trick Betty into leaving with him.  Before he can do so, Venom crashes through the window and starts beating him to a pulp, but is interrupted when Betty nails him with sonic pepper spray (a gift from Peter).

Venom takes Betty's weapon and tells her to run.  He is then ambushed by Megtak, but manages to get the upper hand by throwing him into Jack.  Venom takes off and finds Betty, who still thinks Venom is trying to kill her.  Venom asks Betty to trust him, but before he can fully explain himself, the two of them are attacked by Toxin.  Venom and Toxin have a brawl throughout the streets of New York which ends with Venom taking Toxin out with the help of Betty's sonic pepper spray.

After the fight, Venom finds Betty in an alley and reveals to her that he is Flash Thompson!

This story arc feels like the culmination of everything Rick Remender has been building towards since his run began.  Which is only fitting, as this is his last story arc on the title before Cullen Bunn takes over the writing duties full time.  Remender and Bunn really excel with the character work on Flash Thompson; the scene at the beginning of issue #17 where he calls for the symbiote is akin to an alcoholic going into relapse.

Crime Master and Jack 'O' Lantern continue to be truly despicable, entertaining villains.  The rest of the Savage Six?  Not so much.  It didn't feel like the Savage Six were really given a proper build up throughout Remender's run.  The Human Fly isn't very interesting, it's way too soon to be putting Eddie Brock in another symbiote suit, and Megatak and Death Adder are devoid of any personality whatsoever.

The artwork in both these issues was really impressive, particularly Kev Walker on issue #17.  He's a perfect fit for Venom, and hopefully he'll be back on the title soon (I believe he's currently drawing Dark Avengers, formerly Thunderbolts).  While "Savage Six" has its problems, it's hard to imagine Remender disappointing us with his final stint on Venom.  Looking forward to reading Betty's reaction to Venom's identity! 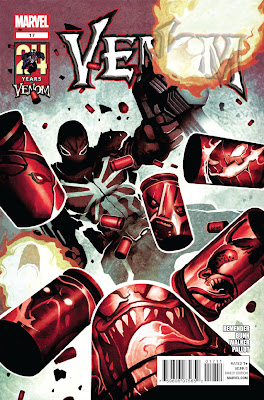 The Immonen siblings take over Avenging Spider-Man for this feline infested team up! 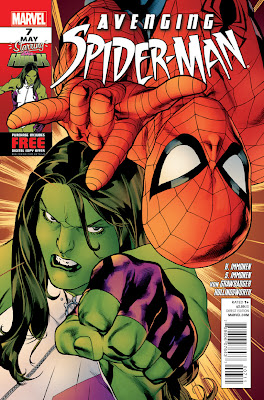 After Spider-Man and She-Hulk take down a giant fish monster that's been terrorizing sewer workers, She-Hulk realizes she's late for an appointment. Curious and hungry, Spider-Man asks She-Hulk where she's going and if she wants company. She-Hulk tells Spidey that her law firm is sponsoring a new Egyptian Exhibit centered around an ancient cat statue. Remembering how he used to visit Egyptian exhibits with his Uncle Ben, Spidey insists that he tag along, but She-Hulk brushes him off.

Unwilling to take no for an answer, Spidey follows She-Hulk to the exhibit, where he notices two mysterious cloaked figures sneaking in. Inside the exhibit, She-Hulk notices them as well, and follows them to the back, where she runs into Spider-Man. Together, the two of them confront the cloaked figures, who are attempting to steal the cat statue. After easily dispatching the would be thieves, She-Hulk picks up the statue and it begins to glow. Troubled by this, she hands it to Spider-Man, who points out to She-Hulk that she has just grown a cat tail! What's more, hundreds of cats begin entering the exhibit.

As people begin to panic and leave, Spidey and She-Hulk head outside and attempt to control the chaos. All of a sudden, the Egyptian goddess of cats, Bastet, appears and claims She-Hulk as her servant. Thinking quickly, Spider-Man grabs a cow's head from the exhibit and poses as the servant of Neith, the goddess of war and hunting. He is able to trick Bastet into returning to wherever it is she came from, and everything returns back to normal. Spidey then heads to his favourite gyros restaurant.

You would think an Egyptian goddess would be able to tell whether she's actually talking to another one of her peers, or someone who's faking it. I love goofy fun Spider-Man stories as much as the next guy, but this ending was a little too bizarre for me. Aside from that, this was a decent, if unremarkable team up. The banter between Spidey and She-Hulk was fun, and Stuart Immonen's art was good (though not quite as eye popping as his previous work). Sadly, I would probably advise most fans to avoid paying full price for this one.

On the other hand, Spider-Man does provide several interesting bits of trivia on Egyptian culture that you can use to impress your friends at parties. Who says reading comics rots your brain?
Read More

Spidey takes on the Mole Man and the Spymaster, the latter in a hot air balloon! 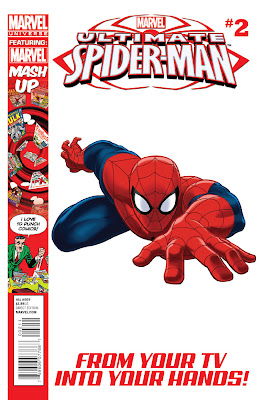 The Story - Notes from the Underground

After picking up a new book shelf for his Aunt May, Peter Parker is forced to take the subway home when he finds that his webbing cannot support the shelf's weight.  As Peter observes the other passengers on his subway car, the subway suddenly crashes.  After changing into Spider-Man in the darkness, Spidey helps the other passengers out of the crashed car and begins to lead them to safety.  While wandering the tunnels, Spider-Man and the passengers run into the Mole Man and his subterranean monsters!  Spidey is able to take out the Mole Man and his giant pet, while the passengers are able to hold their own against the Mole Man's smaller minions.  As the Mole Man retreats, one of the passengers starts going into labour.  The next day, Spider-Man's adventure appears in the Daily Bugle under the headline "Subway Baby."

Spider-Man and White Tiger foil a bank robbery, but White Tiger chastises Spidey for his over reliance on his tech (in this case, his "concussion webs").  They then get a call from Nick Fury, who informs them that Spymaster is on the loose at Kimball Field, in possession of a stolen mutant growth hormone.  Leaving White Tiger to clean up the mess at the bank, Spidey grabs his ("shudder") spidercycle and heads to the field.  When Spider-Man arrives, Fury informs him that Spymaster is trying to escape on one of the many hot air balloons floating over the field.  Spidey hitches a ride on one of the civillians' balloons and eventually spots the Spymaster.  Unfortunately for Spidey, he's now out of web fluid!  Forced to improvise, Spider-Man is eventually able to take down the Spymaster, all without using his tech!

This issue contains two fun, solid stories set firmly within the world of the new T.V. show.  This comic is a great option for young fans of the television series, but has nothing to offer older readers.  If you want a Spider-Man/Mole Man story that entertains both young and old alike, I'm more inclined to point in you in the direction of Avenging Spider-Man #1-3.
Read More
Newer Posts Older Posts Home