Bendis explained that his love for Daredevil was why he put Matt Murdock through hell, and the idea is applicable here. Every now and then, characters in serial dramas should be shoved through the wringer, and that's less compelling if they've got loving, understanding, supportive and gorgeous spouses by their side. The things that make someone's life enjoyable (IE‑ a good supportive marriage) shouldn't apply to primary protagonists in serial fiction especially in the action genre, which is generally supposed to be as exciting as possible, something that requires things often being bad for the hero.

It is still possible to provide great conflicts for a married Spider‑Man, but it is difficult. No matter what happens, Peter Parker usually has the love of his life waiting for him at home. The writers have to up the ante to offset that or make sure that his problems also affect her, giving the couple inordinate conflicts. While some pre-OMD stories have shown Peter having bad days, these stories are sometimes ludicrously dire, in order to balance the other extremes of confidence, stability and happiness which result from a good marriage. 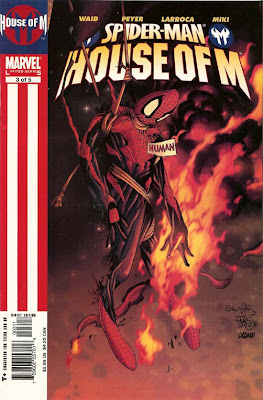 The events of the decade and a half before BND showcase the excessive tribulations that have affected the couple. Peter’s best friend dies, but initiated a plan with killer robots impersonating his long believed‑dead parents. His Aunt dies. He is told that he is not the real Spider‑Man, but a clone, soon after learning he'll be a father. The closest person he ever had to a brother dies, after his greatest enemy returns from the dead, poisoning his wife, so she suffers a stillbirth. His wife is believed dead in a plane crash. After a traumatic experience, his wife leaves him and moves to California. He was believed dead of radiation poisoning. The world learned his identity, and the Kingpin hired someone to kill his loved ones. His aunt was in a persistent vegetative state as a result, while he was declared an enemy if the nation. Superhero teams are instructed to hunt him down, and his wife was a fugitive for supporting him. A demonic entity offered to cut a deal to make all the problems go away, and all he wanted in turn what was most important to Peter Parker.

It’s difficult to imagine writers conjuring twenty more years worth of dilemmas for a married Spider‑Man. Putting Peter and Mary Jane through all these conflicts also had an additive effect, making the two of them seem older than they should be portrayed as, when the readers start to consider all the things they’ve been through together. Peter was rarely seen thinking about some of the tragedies, especially the loss of his daughter and the trauma of losing Gwen again in House of M. As the comics don't cover every moment in his life, it does makes sense to show only the moments that are more accessible to new readers. But it is bothersome when the hero ignores tragedies that are on the minds of the readers.

These effects are less noticeable if it’s just one character going through all of the storylines. In that case, the events would also likely be less extreme, as there’s no need to knock the protagonist off a high place, or to consistently endanger his most important supporting character. It’s also easier to portray a Peter Parker whose private life isn’t going so well, when he’s not married.

If the marriage had remained a part of the series, the next Amazing Spider‑Man writers would have to sometimes shake up the status quo despite being unable to change the certainty that Peter Parker would always have a loving, supportive and beautiful wife on his side. They can’t do the stories that have already been done, in which Mary Jane's been believed dead, Mary Jane was pregnant (ending in stillbirth), Spider‑Man's identity has become public, Peter Parker had been operating as a superhero without telling Mary Jane, Aunt May died, Aunt May’s been shot, Peter has died and Mary Jane has left Peter. In addition, they can’t do anything that makes the characters unsympathetic, which removes drug addiction and adultery.

So What Stories Were Left for a married Peter and Mary Jane?

They could do a story in which Mary Jane disappears. It would be a little bit similar to the Jonathan Caesar subplot in which she was kidnapped, and the story in which Mary Jane was believed dead, but it could probably shake up the book for an year or so, until the big moment in which Spider‑Man gets to rescue her. There could also be a story where for whatever reason Spider‑Man has to go on a series of classified missions at a moment's notice, which wrecks havoc on his relationships, when he disappears for weeks on end without being able to contact MJ. This type of story would also prevent Peter from interacting with his supporting cast, and it would presumably be finite.

Peter may fake his death for a while, which has the same problem. Mary Jane may have to go into hiding for a while if a new villain knows Spider‑Man’s identity and threatens his loved ones, though that approach would also result in Peter being irresponsible for hanging out with the rest of his supporting cast, as they would be in danger too. Peter will still know exactly how awesome his life id going to be when everything blows over. 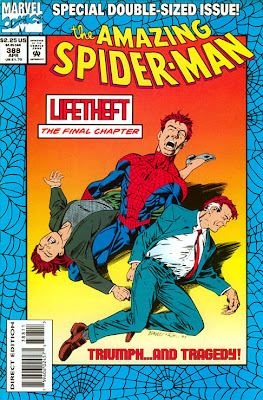 I guess Marvel could also do a story in which Mary Jane's sick, maybe even dying. That could also shake up the book for a year or so, and provide some tension for Peter. Marvel could do a story in which Mary Jane's sister dies, and she's left with custody of the kids. Though I think it'll be difficult to do that storyline without making the Parkers seem too old,  and without the kids overwhelming the private subplots.

Marvel could reveal that Baby May Parker is alive. Peter’s search for her could be a dramatic year long plot, and when it’s all over, there are many stories left to tell with Peter and Mary Jane as essentially new parents. Given the disadvantage of allowing the child to get any older, the writers would probably have to keep the kid’s age stable in future storylines. The problems of the marriage would remain, with readers still believing that most stories will end with Peter at home with a loving wife and daughter. I do have to admit that Peter having to take care of a child would be a source of conflict, and could make any scenario in which something bad happens to Mary Jane exponentially worse. If Mary Jane disappears for 30+ issues without any explanation and Peter has a young child to take care of by himself, it could make for a riveting year of Spider‑Man comics.

All the things this couple has been through will continue to add up, which will have a harmful effect upon the reader’s suspension of disbelief. If the writers wanted to put a bachelor Spider‑Man through the wringer, as occurred in the Gauntlet mega-arc, there wasn't a need to do anything bad to Mary Jane. They would start with Spider‑Man in a possibly unstable status quo, so they wouldn’t need to remove those comforts before putting the hero through hell. They wouldn't have to overcompensate for his supermodel wife.