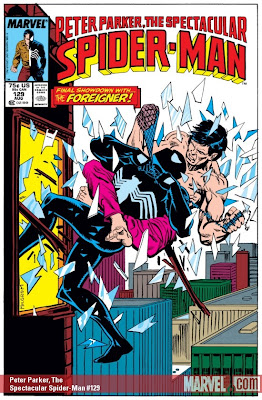 While considering the effect of the marriage on the quality of the Spider-Man comics, it's worth looking at that storyline in the context of of its time. Regardless of the quality of the story, it's something that will still be considered essential reading, because it was so important to the characters. With the Illusion of Change, it's easy to ignore an inadequate arc. A problem with the commitment to change approach is that major moments in the series might be done poorly.

If I say that I'm going to talk about four hastily penned issues which changed Spider-Man's status quo in a big and controversial way, the immediate assumption is that I'm referring to One More Day, although I could just as well be talking about Amazing Spider-Man #290-292 and Annual 21. Especially when you consider all the events which led up to it, and whether the characters acted in an entirely reasonable way.

Imagine you had a friend named Peter. This guy's been through a lot. He lost his parents was he was young, and for a long time it was believed that they were traitors against the United States, though evidence eventually emerged indicating otherwise. When he was fifteen, the uncle who raised him died violently. His girlfriend was murdered, shortly after her father's violent death.

At some point years ago, he proposed to his girlfriend. And before she left New York City, she dumped him. 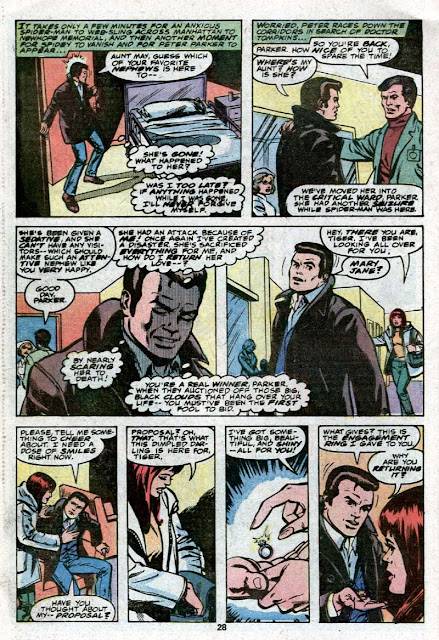 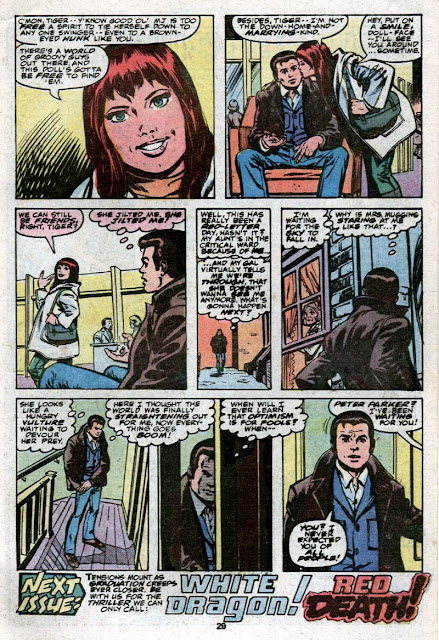 She came back at around the same time he quit grad school to focus on photography. They became friends. Another of Peter's friends was recently murdered on assignment in a foreign country. Peter found the body. Shortly afterwards, Mary Jane helped cops arrest her father for theft, after the man tried to frame her sister for the crime. She reconciled with Peter. And they're getting married in three weeks. As far as you know, she isn't pregnant.

If you think about it from the perspective of a supporting character, it's kind of absurd. Peter and Mary Jane weren't a couple as of Spider-Man VS Wolverine, set shortly before Amazing Spider-Man #289, in which Felicia Hardy was in Peter's apartment in her bathrobe, asking Spider-Man to show his gratitude after she made Peter three costumes. 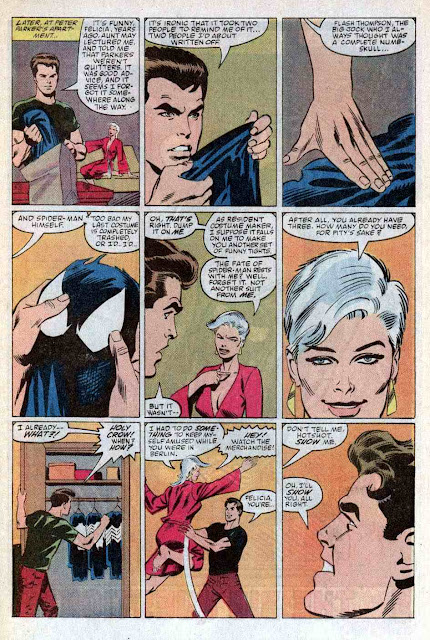 Peter David quickly broke up Spidey and the Black Cat in Peter Parker the Spectacular Spider-Man #128-129, revealing that Felicia Hardy was in league with the Foreigner. 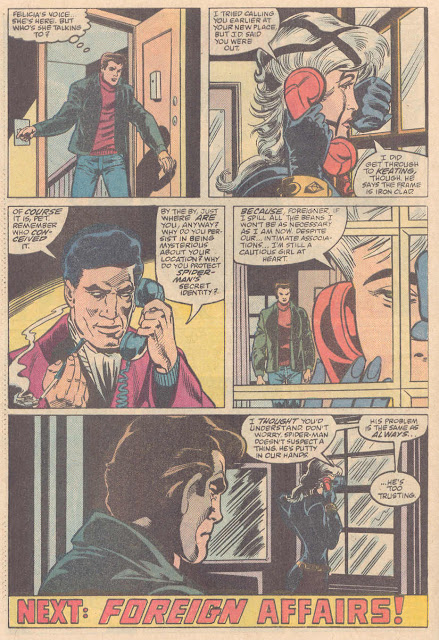 One of his best friends was murdered, and as far as Peter knew, revealed to be a supervillain. This caused another of his friends to have a mental breakdown. And then there was the Black Cat thing, This one's definitely interesting for anyone complaining about the post-BND material being inappropriate for children, with the Black Cat sleeping with the Foreigner, while manipulating him and Spider-Man.

So right before Peter Parker proposed to Mary Jane, another girl betrayed him in a nasty way. And this was never brought up in the proposal issues. Or during the wedding.

It could have fit organically into the page where Mary Jane gave her reasons for saying no. It's something you'd expect to come up in conversation in this particular context: a guy proposing to his ex shortly after his heart was broken by someone else. All you'd need is for Mary Jane to ask if the proposal has anything to do with Felicia, Peter to say it doesn't and an editor to guide the reader to Peter Parker the Spectacular Spider-Man #128-129, while Mary Jane starts mentioning the other reasons she's saying no to Peter.

While there are similarities between the two, you can criticize the marriage for being ham-fisted, without being a hypocrite for not objecting to OMD on the same grounds. The marriage was always presented as a natural development, so it's going to be judged differently than something which was always presented as supernatural. When you're dealing with something that's supposed to be believable, things will be held to a different standard. It's different from stuff like magical retcons or people becoming vampires, that doesn't happen in the real world. There are no real world rules to deal with that type of stuff, so there's nothing wrong with using two or four issues to develop a supernatural "solution" for a dilemma. As a side note, if One More Day were undone in the course of 22 pages, I doubt that many of the readers critical of One More Day for being sudden and poorly set-up, would be hypocrites for liking its reversal.


While couples can be together for years without getting engaged, it is worth noting that serial fiction seems to encourage speedy nuptials. It's one place in which Marvel time's flexible, as some couples seem to move at different rates than the rest of the world.

Harry and Lily were dating for a few months prior to their engagement. Unless Harry slept with her after discovering that she was a supervillain, she was already knocked up at that point, although neither was aware of it yet. Aunt May and Jonah Sr got engaged in the same story in which Peter found out about their relationship. In Mark Millar's run of the Fantastic Four, the Thing proposed to a girl eight issues after they started dating.

The "fourth date marriage" trope doesn't only apply to comics. Characters get engaged and married quickly on TV shows all the time. Much of that is due to casting limitations, and the desire from the showrunners to quickly position the characters for a new arc.

As a result, the expectation from the readers that a couple will get engaged immediately may become overwhelming within an year. While it can be suggested that one way to avoid this complication in how relationships are perceived is to restore the marriage, there are numerous alternatives. Readers should be able to get used to a slightly more realistic approach to fictional romances under the Illusion of Change.