Here it is, the long overdue Amazing Spider-Man 686 review!

The Story
We last saw the whole of Symkaria bombed. Well, this issue pretty much makes the cliffhanger from the last issue null. We start with Silver Sable, obviously mourning over her country. While Spider-Man tries to console her, Black Widow insists that they have to move on if they want to save the rest of the world.

Agreeing with Natasha, Spidey heads on to save the civilians who are still alive. Natasha stops him telling him that this was not what she meant. She meant for them to leave the place and shut down the remaining satellites. 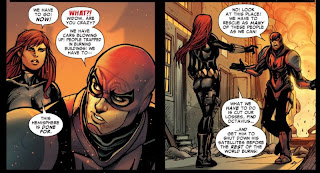 Meanwhile, at the Horizon crew have lost contact with Spider-Man. They also realize that the tech used to create the satellites seem rather familiar.

Elsewhere, Mysterio is having the time of his life, watching Spider-Man and Black Widow argue, just as he predicted. Apparently, the whole destruction of Symkaria was nothing more than a big show he created, while the 'civillians' were simply actors he paid. 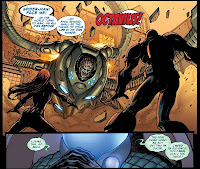 As part two of his show, Mysterio sends Chameleon in the form of Doc Octopus to fight Spider-Man in the flesh. It is not long however until the real Dr Octopus finds out what games Mysterio is playing. He then assumes control of the "Octavius" robot that Chameleon was controlling, thus giving away the plan to Spider-Man.

Spidey soon defeats the robot ( once he realizes its a robot) with his magnetic webbing. He then explains to Sable that her country is not destroyed, and later has a serious chat with Mysterio and Chameleon. 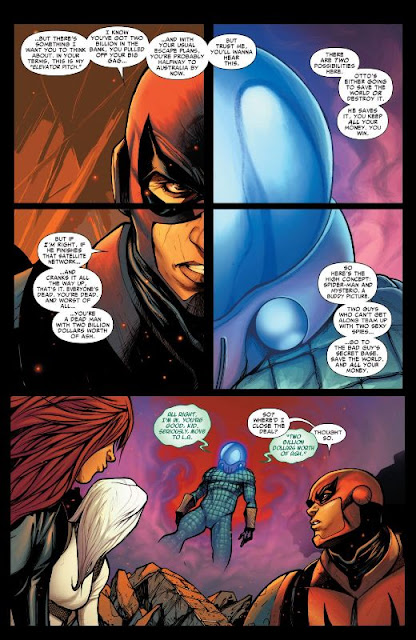 After the chat, Mysterio and Chameleon decide it best to turn on Dr Octopus.

Meanwhile, in some smaller scenes, we see MJ buying over a club, saying that she wants a place to throw a giant party for a friend. We also see Jameson Sr. trying to contact his son. Unfortunately, the Mayor hangs up on his father before any real conversation could be made.

Coming back to the real story, Mysterio told the good guys the location of Dr Octopus's s secret base. The issue ends with the good guys and Mysterio fighting the Avengers, now under Dr Ock's control.

Oh yea, (warning: lame part) and somewhere at the end there, Spider-Man realizes that Dr Octopus has been using all his inventions from Horizon to create this disaster, thus making the whole situation Peter's fault.


This was a pretty good issue. The story is definitely picking up from the last couple of issue. Though many people claim to have seen the destruction of Symkaria being a joke, I thought it was pretty well. done. Honestly, I was half hoping that Symkaria would really be destroyed, just to add a little weight to the danger Dr Octopus carries.

I also like how practical Black Widow was in this issue. Probably the best part of this issue for me though, was the fact that Mysterio agreed to join forces with Spider-Man! I'd like to see them do something out of the ordinary in their team up.

Some bad parts about this issue though included the last part, where Spider-Man blames himself for everything. I also thought fighting the Octobot controlled Avengers should be a no brainer - use your magnetic webbing Spidey! After all, he used it on the zombie people on the space station as well as on the Octavius robot. So why fight these zombiefied Avengers with your hands and legs!?

Oh well. Till next time.