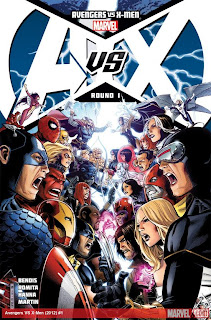 A while ago, we decided the whole Avengers  Vs X-Men event should be reviewed here. As such, I'm gonna do a quick review for issues 1-3.


Avengers Vs X-Men # 1
It essentially starts when the Avengers notice something flying in from space, crashing into an airplane. They soon realize that its Nova. Nova, tired and worn out, warns the Avengers that ' its coming.'

Meanwhile, at Utopia, Cyclops is busy training Hope. During training, she bursts out into some kind of Phoenix and sends Cyclops flying off.

The Avengers essentially figure out that the Phoenix entity is back and is headed for earth. They also soon notice the energy signatures expelled by Hope during her training over at Utopia. From past experience, the Avengers know that Phoenix is dangerous. As such, their plan is to intercept it and prevent it from coming to earth. Capt America goes to Wolverine for some advice. He also tries to recruit Wolverine to join in the cause.

Cyclops on the other hand thinks that the return of Phoenix cold be a game changer for Mutants. For those who do not know, the Mutants are becoming extinct. Cyclops want to train Hope to be able to control the Phoenix. At this point, even Magneto, who is now on the good guys side, along with others thinks it is an unwise decision since Phoenix cannot be controlled. Regardless, being the leader, Cyclops makes his decision.

Just then, Capt America appears to have a chat with Cyclops. The discussion soon gets ugly and we end the first issue with a fight starting. 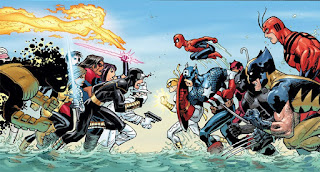 Avengers Vs X-Men # 2
As soon as Captain America calls in the Calvary, all the X-Men get worried, asking Cyclops to reconsider. Unfortunately, Cyclops is pretty set on his decision. As a first attack, Magneto sends Colossus flying through theAvenger's ship. About a hunders different fight scenes then take place. In the meantime, Emma Frost makes sure that Hope is safe and kept indoors. 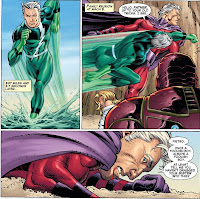 Quicksilver is among the many X-men who is also on the Avengers's team, most notably Wolverine and Beast. During the fight, Spider-Man and Wolverine go in to take care of the root of the problem - Hope. Wolverine tries to kill Hope, who has escaped and knocked out all the friends who tried to stop her. Wolverine never gets a chance to touch Hope though as she turns into a powered down Phoenix and runs away.

Meanwhile, a small group of other Avengers have traveled into Deep space to try to stop the actualy Phoenix from coming to earth. 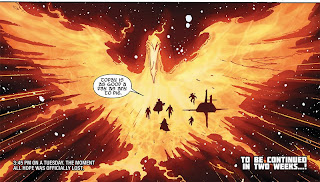 Avengers Vs X-Men # 3
This issue starts with Wolverine waking up with no skin and some flesh. He's busy healing from being burnt alive by Hope. Spidey explains to him that Cyclops surrendered and a discussion is now taking place as to what should be done next. Wolverine knows immediately that something is up.

True enough, Cyclops was wasting time preparing an escape. Magik, in the form of Dr Strange, teleports the X-Men away to Long Beach. Once away from the Avengers, Cyclops first plan is to find the last functioning Cerebra to find Hope. Cyclops says he has a mole in Logan's school ( where cerebra is )

Meanwhile, Rachel Summers tells Wolverine that Cerebra is giving off 5 different signals of Hope's location. After her conversation with Wolverine however, she also sends information regarding Hope's location to Scott.

Capt A. splits the Avengers to search for Hope. However, he requests that Wolverine ride with him. In the ship, the two have a talk about Wolverine trying to kill Hope. Wolverine shows no regret of his decision. The talk soon becomes a fight and Wolverine is sent flying off the ship. Alone, Wolverine decides that it is up to him to take care of the problem alone.

Thoughts
Up to this point, the AvX story seems to be pretty intense. We have Cyclops, sort of being painted as the bad guy in the picture. Then we have Wolverine, who has his own solution to solving things - death. It's really pretty typical and true to his character.  We also have Captain America, who is trying to do the right thing, but at some point is being corrected by Tony who points out that Capt. is behaving just like he did during Civil war.

This just goes to show that when a World threatening event takes place, the good guys can't fight together. Probably what I liked the most was seeing Magneto tell Cyclops that he was behaving like himself, selfishly looking to protect the Mutant race.

Anyway, I'll leave my thoughts like this for now. I might come and edit it a little later.