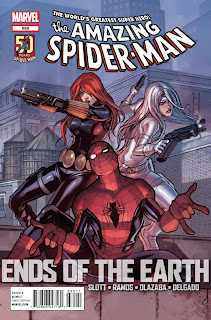 Here we go, with part for of the Ends of the Earth. We finally get to see Dr Ock's true side here in this issue.

The Story
This issue begins with Spider-Man, Black Widow, and Silver Sable fighting Rhino. They've been looking for Dr. Ock's main base for three days now. Anyhow, Rhino gets taken out about three pages into the issue, so you can be sure he was absolutely no threat.

In a somewhat unexpected turn of events, we see that the world, including SHIELD, has turned against Spider-Man, Widow and Sable. SHIELD comes to take the good guys in, but don't stand a chance as the three disappear in some smoke and jump into their invisible ship.

On the ship, we see Spider-Man and Sable torturing Sandman, or what is left of him. Sandman eventually gives in and tells them whatever they need to know. It's implied to us readers however that Spider-Man was not going to continue torturing Sandman if he never gave in.

Spidey makes a call to Horizon, who then questions Spider-Man as they have confirmed that Dr. Ock's technology can save the world from Global Warming.

Back at the Sinister Six base, Chameleon speaks his thoughts. He wants to abort the mission since he has two billion bucks and a clean slate to start over. He also adds that there are only four of the Sinister Six left and that things could get risky. 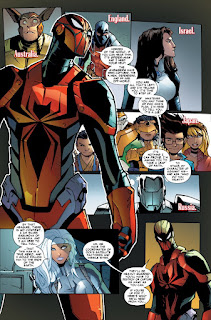 Back at The Swan aka the Sable's invisible ship, Widow tells Spidey that she has intel of Dr Ock recruiting more forces/ villains to take them out. In response, Spider-Man calls for the help of every Second Class super-powered good guy out there to help.

Soon after, Sable and Spidey share an 'almost moment' of which Spidey lets slip by. It is implied that his mind is on MJ and a promise he made her. ( I think I may have missed it. )

We also get to see a little bit of Mary Jane in the issue soon after as she walks along the roads of Manhattan believing Peter will come through, no matter what the rest of the world thinks.

Nothing else that important happens in this issue. Essentially, with the help of the other good guys, Spider-Man's job is reduced substantially. Spidey eventually finds Ock's main base ( in Symkaria ), only to find it empty. Dr Ock eventually comes on screen and tells Spider-Man that the base is empty because he has launched all the satellites required to finish his plan.

Dr Octopus then turns up the heat and the whole of Symkaria is burnt, along with that half of the world facing the sun. 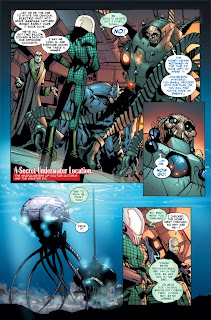 It is pretty clear from this issue that Dr Octopus was a double crossing no good, not only to the world, but to the rest of the Sinister Six as well. When Sandman was being tortured, it appeared as though he truly thought they were the good guys this time, trying to save the world.

Furthermore, Chameleon and Mysterio for that matter got what they came for, and were more than happy to leave and abort the rest of the mission. Rhino and Sandman were promised things worth more than money. You can be sure that destroying the world however, was not part of their agreement.

As for the Sable/ Spider-Man moment, I noticed there were a number of fans on the comic forums who were hoping there would be some kind of development between the two characters. I admit that it would have been pretty interesting to see some romantic interest evolve from their friendship, however, being a MJ fan, I think this book doesn't need anymore delay as far as the Peter Parker/ Mary Jane relationship is concerned. I'm pretty much waiting for issue 700 to find out what happens in the end.