Spider-Man and Daredevil form an uneasy alliance with the Punisher and his new partner to destroy the Omega Drive, but can can you really trust the Punisher? 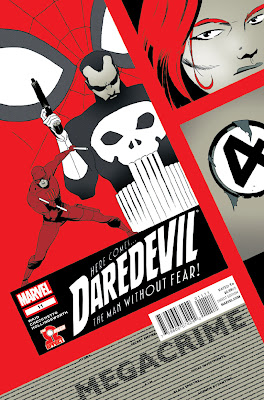 Reed Richards calls up Spider-Man and fills him in on Daredevil's possession of the Omega Drive, a device that contains valuable, incriminating information on criminal organizations such as A.I.M., Hydra, Black Spectre, Agence Byzantine and the Secret Empire, among others.  The Drive is made from the remnants of an old Fantastic Four uniform, meaning that it's made up of unstable molecules and thus difficult to both access and destroy.  All the criminal organizations know that Daredevil has the Drive, so Reed asks Spider-Man to ask Daredevil to bring the Drive to him for his own safety. 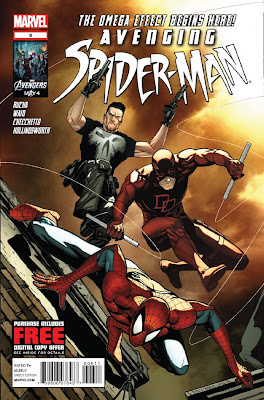 When Spider-Man arrives at Matt Murdock's apartment, he finds Hand ninjas already scoping the place out, and attacks them.  Inside, Matt is having a meeting with the Punisher, who asks him to give him the Drive.  When Matt refuses, the Punisher's partner, Rachel Cole-Alves, sets off some minor explosives to throw off Matt's senses.  Before the Punisher can take the Drive, Spider-Man comes crashing through the window, still fighting ninjas.  Matt uses this opportunity to change into Daredevil, and the four of them decide to form a temporary truce to deal with the Hand.  Spidey and Daredevil make sure that the Punisher and Cole adhere to Spidey's "no one dies" rule.

After dealing with the Hand, Daredevil explains the Omega Drive situation to Spidey, Cole and the Punisher.  Spider-Man then comes up with a plan to lure all the criminal organizations out into the open so that Daredevil can then destroy the Drive right in front of them, taking the heat off him once and for all.  The Punisher reluctantly agrees to the plan. 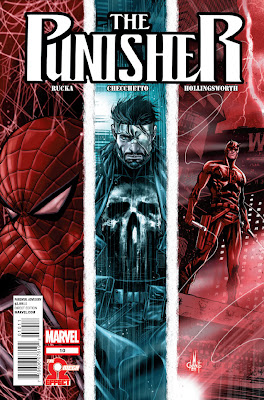 The two teams set out and attack all the major crime organizations.  While attacking the Exchange, Daredevil is able to convince Cole not to kill one of their agents.  Daredevil thinks he's getting through to her, but Cole is unable to take her eyes off the Drive around Daredevil's neck.

Daredevil and Cole reunite with Spidey and the Punisher at Grand Central Station just as all the major crime organizations arrive.  As Daredevil is about to destroy the Drive, Cole hits him from behind and takes it for herself.

Spider-Man rescues Daredevil from the mob of criminals Cole knocked him into and informs him that the device they were going to use to destroy the Drive didn't survive the fall.  The Punisher agrees to stay behind while Spidey and Daredevil look for his now former partner.  The two of them quickly split up. 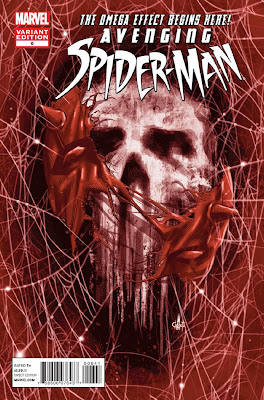 Daredevil is eventually able to trick Cole into revealing herself, confronting her in an abandoned building.  Just as Daredevil convinces Cole to give him the Drive, she is shot in the chest, as the criminal organizations crash through the building with Spider-Man and the Punisher not far behind.  After taking everyone down, Daredevil notices that Cole's body has disappeared.  Punisher informs him that she was wearing a bullet proof vest.  As the three of them part ways, Daredevil comes up with a new plan to deal with the Omega Drive.

I was a little disappointed by The Omega Effect.  Don't get me wrong, it was a well written and beautifully illustrated story, but for a crossover it felt pretty inconsequential.  By the end, we're right back where we started; a Daredevil reader can easily skip the crossover and not have to worry about being unable to follow what happens next.  The most significant thing to happen was the possible redemption of the Punisher's new partner, Cole.  It was nice to see Matt get through to her, but as someone who doesn't read The Punisher (not because it's a bad book, I'm just not a Punisher fan) Cole's story isn't really something I'm invested in.

Mark Waid and Greg Rucka handled the interactions between Spidey, Daredevil and the Punisher perfectly, but the best part of this story was Mark Checchetto's artwork.  Ever since Grim Hunt I've been eager to see him draw Spider-Man again, and he doesn't disappoint here.  The Omega Effect was a great read, but the ending could have used a bit more weight. 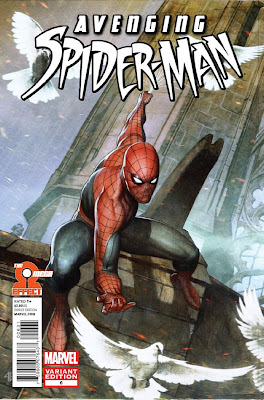