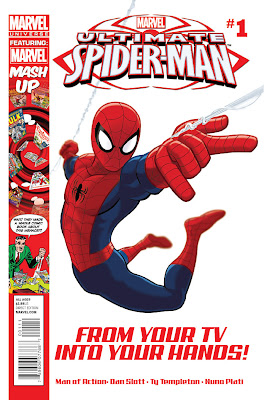 Spider-Man comes across the Shocker while on his way to get a cake for Uncle Ben's birthday.  As Spider-Man fights the villain, he explains his origin story to the reader.  Spidey defeats Shocker but arrives at the bakery just as it closes.  Fortunately, the baker was so impressed with Spider-Man's display against Shocker that she lets him have a cake for free!


Second Story - ...Ultimate Peter Parker
Peter Parker is called from class by Principal/Agent Coulson for a special assignment.  When Peter expresses concern that everyone will notice he's gone, Coulson unveils a Peter Parker mandroid, programmed with Peter's personality and memories.  The mandroid will pose as him in school while he's out as Spider-Man.  Coulson then briefs Spidey on his mission, which is to follow Nick Fury around New York and make sure he's not assassinated by Hyrda.

As Spidey shadows Fury, he worries about what his robotic counterpart is doing back at at school.  Lost in thought, Spider-Man notices too late that Fury is being attacked by Madame Hydra and her goons, who succeed in shooting Fury through the chest.  Luckily, the Fury who was shot was just an android, with the real Fury using it as a way to test Spider-Man.  Madame Hydra is able to use the android to hack into S.H.I.E.L.D. and program all the remaining androids to self destruct.  Spider-Man barely makes back it in time to remove the Peter Parker android before it blows up Mary Jane and Harry Osborn.

On the S.H.I.E.L.D. Helicarrier, Spider-Man tells Fury to stop making Peter Parker androids, annoyed that the android got to spend the day having the normal life he could never have.

This comic is the first exposure I've had to the universe to the new Ultimate Spider-Man television series, as the show has yet to premiere in Canada (much to my chagrin).  The purest in me finds the liberties they've taken with Spider-Man's world to be somewhat off putting.  One of the central appeals of the Spider-Man character is that when he's not off being a superhero, he's a regular guy with regular problems.  Having a secret agent principal, a robot double, or (in an upcoming episode) a supervillain gym teacher intertwines Peter and Spider-Man's world too much, and detracts from what makes the character special.  Then I remember that this show isn't for me, it's for the kiddies, and it's really no different from what Paul Tobin did in Marvel Adventures Spider-Man where he gave Spidey a mutant girfriend who can talk to animals.  If something like Spider-Man and his Amazing Friends was a generation's first exposure to Spider-Man, then I'm sure this show will do just fine.  We older fans can enjoy the show for what it is or retreat to the classic comics and our Spectacular Spider-Man DVD's.

So how was the issue itself?  Not bad.  The first story does a decent job of introducing who Spider-Man is to the uninitiated.  It also attempts to emulate the style of the T.V. series, with a number of cutaway gags and pop culture references sprinkled into the fight with Shocker.  Most of it works; I like the bit at the beginning where we see Peter's origin from the radioactive spider's point-of-view.  I was a little miffed that the Man of Action glossed over the most important part of Spidey's origin: how he feels responsible for Uncle Ben's death.  Perhaps they're planning on revealing that aspect of his origin in a future episode (similar to what Greg Weisman did in The Spectacular Spider-Man), or maybe they were worried it would disrupt the upbeat tone of the story.  Either way, it's a glaring omission. 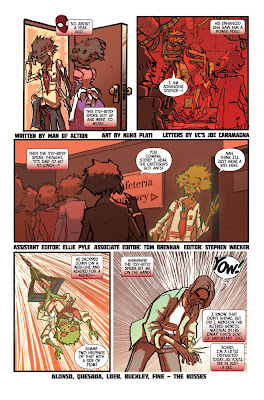 The second story was... weird, though it's probably a good indicator of the kinds of stories the comic and show are going to be telling.  Peter's anxieties over what the android might be doing while he's out as Spider-Man rang true and were pretty funny.  You would think Mary Jane and Harry would have expressed more concern for Peter's sudden disappearance after Spider-Man rescued them from the exploding android.

Marvel Universe: Ultimate Spider-Man is a good choice for a young fan looking to discover more of Spider-Man's adventures.  Everyone else should stick with Amazing.
Read More 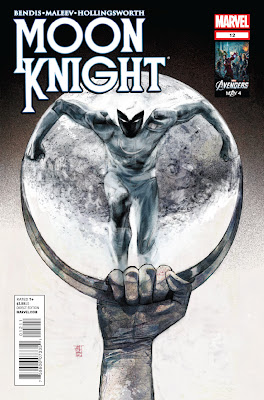 With Detective Hall and a group of police officers with a search warrant knocking on his door, Count Nefaria decides to make a run for it, and flies towards the police station.  When he arrives he scolds the corrupt Captain Quaid for failing to keep his officers in line and promptly vaporizes him.  Before Nefaria can do the same to Snapdragon, he is attacked by Moon Knight.  Moon Knight fights valiantly but is no match for Nefaria's raw power.  Nefaria drags Moon Knight outside only to be confronted by the Avengers, and is easily defeated.

Afterwards, Marc Spector and Buck Lime give Tony Stark the Ultron head.  Tony explains to them what Ultron is, and that it's planning something big, and Nefaria most likely wanted to use the head to find a way out.  After Tony leaves, Iron Man becomes Moon Knight's new third personality alongside Echo and Wolverine.

Brian Michael Bendis ends Moon Knight the same way he has ended many of his stories, with a group of heroes coming in to gang up on the lone supervillain.  I'm a little disappointed; I would have liked to have seen Moon Knight and Buck take down Nefaria on their own at some great cost, or even fail despite their best efforts.  As it is, this ending felt way too conventional for a series which up until this point has been anything but.

Despite my disappointment with the ending, I immensely enjoyed this twelve issue journey Bendis and Alex Maleev took us on.  If you missed this series in singles, I would highly recommend getting the inevitable oversized hardcover that will likely follow.  It's too bad this marks the end of Moon Knight's journey for the time being.  I would love to see Dan Slott's (who apparently loves Moon Knight) take on the character.  Sadly, if Bendis and Maleev can't get a Moon Knight series to sell half decently, then I doubt Marvel is willing to take any more chances with the character in this current economic climate.  At least we'll see him again in The Ultron War.