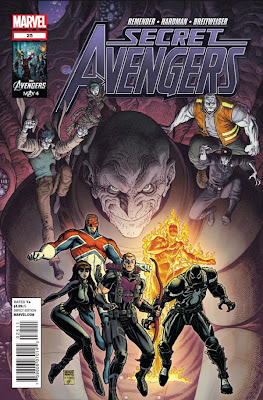 Captain Britain is teleported into the Core and immediately attacked by Lady Deathstrike.  He is able to throw her aside, but is then attacked by Ultravision robots until the Human Torch arrives.  The Ultravisions stop and bow down to the Torch, worshipping him as "Grandfather."

Meanwhile, Father sits in a meeting with the representatives of the various Descendant species: the Doombots, Life Model Decoys, Sentinaughts, Adaptoids, Ultravisons, Machine People and the Reavers.  Father tells them that the Avengers must be killed inside the Core before they learn of what they're planning and call for backup. 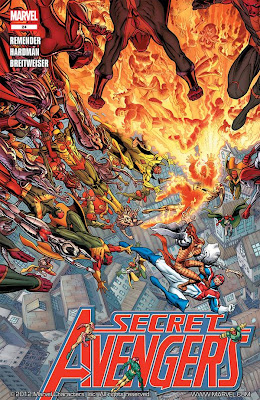 A pair of Adaptoids chase Yalda's son throughout the streets.  Just when they think they have the boy cornered, the Adaptoids run into Valkyrie and the Black Widow.  The two of them take the boy and make a run for it.  Elsewhere in the Core, Hawkeye and Beast are captured by Cyborg Wasp and Miss America.  On the Lighthouse, Flash Thompson sits bored in his wheelchair when alarms go off informing him that the team's location has been blocked.  Instead of calling Captain America, Flash decides to take matters into his own hands.

Meanwhile, Hawkeye and Beast sit in captivity in the Parish Tower, with Beast critically injured and bleeding out.  Hawkeye tries to get through to Cyborg Wasp but has no luck.  Things begin to look bleak until Ant-Man appears, apparently not dead after all!

The Human Torch ambushes Cyborg Miss America and questions her on what Father has planned.  Miss America tells the Torch about the history of Father and the Descendants, revealing Father to be a scientist who was tasked to create more androids like the Human Torch during the Cold War along with two other scientists called Mother and Brother.  When the scientists failed to imbue their androids with true life in the same way the Human Torch had, they turned to magic.  Using something called the Orb of Necromancy, they successfully created twenty androids who were able to live and breathe.  These androids were the first Descendants, called High Breeds.  Father wanted to create more, but Brother did not want to create a new species for humanity to compete with.  Brother disappeared and took the Orb with him, while Mother released the High Breeds into society where they successfully integrated, unaware of what they were.  Their powers only manifest themselves when they are in mortal danger.  Father continued to create new Descendants, but they were not the same without the Orb.  After the Torch flies off to confront Father, Miss America informs Father that the Torch is on his way.

Valkyrie and Black Widow are able to find the location of the teleport circle that can take them back home, but are then attacked by Adaptoids.  Black Widow attempts to get Yalda's son to safety, but is attacked, while three more Adaptoids gang up on Valkyrie.  Valkyrie manages to successfully lure one of the Adaptoids into the teleportation circle, transporting it into Pakistan where it is immediately attacked by Venom.  As Venom fights the Adaptoid, the two of them step on the teleportation circle, and are transported into the Core.  Venom is able to give Valkyrie a hand and the two of them defeat the Adaptoids. 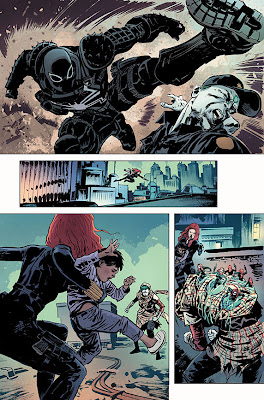 The Human Torch and Captain Britain are en route to confront Father when they are attacked by a Master Mold Sentry.  As Ant-Man helps Hawkeye carry Beast out of Parish Tower, they spot Captain Britain and the Torch fighting Master Mold.  The Torch is able to fly through Master Mold's head and order it to self destruct.  Meanwhile, Black Widow is saved by Yalda's son, who is able to tap into his powers and destroy the Adaptoid.

All the Avengers rendezvous with Venom and Valkyrie and leave before Master Mold self destructs.  Before they are able to teleport out, the Human Torch is shot through the chest by an Adaptoid while saving Yalda's son.  After they leave, Yalda, now under Father's control, is able to absorb the blast, saving the Core.

Back at the Lighthouse, the Avengers are able to keep the Human Torch's consciousness intact while  they find a way to transfer it into another body.  They also decide to keep the existence of the Descendants a secret.  When Ant-Man is left alone, he communicates with Father, as he is now under his control.

Rick Remender delivered an interesting, if flawed first arc of Secret Avengers.  I'm not sure the Marvel Universe needs another group of people who look like us but have special powers.  Hawkeye went pretty quickly from not wanting Venom on the team to accepting him as a member.  Hopefully Remender can flesh out their relationship in future issues.  On the other hand, Remender makes Father a force to be reckoned with, always being one step ahead of his opponents.  Looking forward to seeing how this storyline plays out but it looks like we'll have to wait a while, as Secret Avengers is going to be mired in Avengers vs. X-Men madness for the next few months.