The final showdown! Avengers and New Avengers VS Osborn and Dark Avengers! 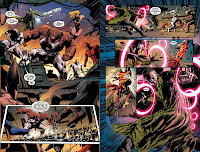 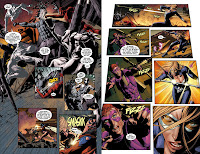 Cage, still looking for his wife, goes to her old office, Alias. Inside, he looks at a picture of himself, the Jewel and Iron Fist.

Avengers # 24
Two weeks ago, Osborn, Madame Hydra and Superia met with A.I.M.'s scientist supreme, Dr Rappaccini. He wanted something for himself from the Special Abilities department. She told him about the Adaptoid program - he'll have all the powers of anybody he touches. She also warned him about the side effects. 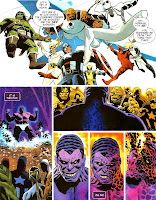 In the present, while facing against Osborn and Hand's (the ninja group) assassins, Red Hulk punches him. This results in Osborn hulking out. The heroes try to use ranged attacks but he uses Vision's density control and becomes immune to them. They then switch to Plan B. Noh-Varr makes him absorb his alien powers. All the Avengers grab him at once hoping that it will cause power overload. However, that makes Osborn more powerful. Captain America and the New Avengers show up to save the day, and when Osborn absorbs everyone's powers, the side effects kick in.

They apprehend members of HAMMER and AIM. At the White House, the President compels Captain America to do damage control on the Avengers' image. He asks what happened to Madame Hydra, Captain America says she's still out there. We see her addressing a large group of HYDRA soldiers, telling them that Osborn's failure will help HYDRA rise again.

Thoughts
I've been reading both, the Avengers and the New Avengers, since the Heroic Age, and I have to say New Avengers is the better title.  New Avengers #23 was a good issue with awesome action scenes splashed across pages. Avengers #24, on the other hand, felt a little rushed. And the new Dark Avengers didn't get any closure and we didn't get to see Ai Apaec do anything in his six-armed Spider-Man form. Worse, New Avengers # 23 was released after Avengers #24, so, everybody already new what would happen.

The art was very good, but then again I've always liked Deodato and Conard's style. I'm not a big fan of Daniel Acuna's style for comic book art but I like the way he drew faces in Avengers # 24.

While the illusion of change approach works well with a flexible status quo, it doesn't really accommodate a stable state of affairs. That represented one of the problems with the spider-marriage.

Marriage removed tension from the series, because readers knew that the relationship will survive conflicts. It also produced stability, as it was difficult to repeatedly convince readers that Peter may not have a loving supportive wife to go home to.

If “growth”isn’t an option but you want to keep the marriage, this means that the comics would have to deal with an eternally childless married couple in their late twenties. If Peter and Mary Jane have a child or find Baby May, that kid’s age will have to remain the same, which makes Peter’s adventures seem more inconsequential, although The Simpsons and Family Guy have conditioned readers to not ask questions about why cartoon babies don’t get older. There are a few problems with these approaches, beginning with the way it seems to freeze the status quo, as you know that no matter what happens Peter will eventually be comfortable in his house with his beautiful and supportive wife.

A writer can't end a story with a married Peter Parker miserable and alone, wondering if that's ever going to change, without doing something bad to Mary Jane. And most of Spider Man’s problems are somehow less significant when he had a beautiful, loving, understanding and supportive wife who he can really confide in. This limited the drama and made him seem like a jerk any time he complained about his life. It also limited the directions the writers can take the story in. 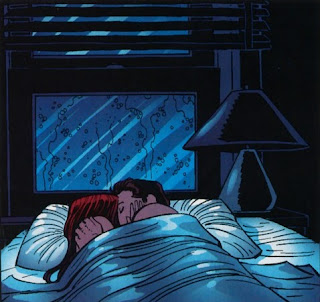 As there will be at least three issues of Spider Man a month for the foreseeable future, the writers and editors do have to come up with the best status quo to keep all those books interesting and compelling in the years and decades to come. Fans of the marriage will maintain that any problems with making that status quo indefinitely compelling are purely the fault of the writer, leading to the “good writers” argument. I would suggest however that a perpetually childless couple eternally in their late 20s will become uninteresting faster than a single guy eternally in his late 20s, due to the greater variety of the latter. Peter's life shouldn’t always be miserable, but it's far more interesting when it's not stable.

These are the reasons why it seems that the majority of potential writers prefer Peter Parker being single, a decision that has little to do with their assessment of their own talent. Some married readers may laugh at the idea that marriage brings stability, but for storytelling purposes, it ultimately does when compared to the alternative. Ask any religious leader or politician trying to protect the institution. That type of stability is good in real life, but bad in an ongoing drama, where it freezes the status quo (especially if the couple won't significantly age, have children or treat one another badly) and makes it harder for readers to believe that any developments (Mary Jane believed dead, Mary Jane goes to California) ultimately matter. Changes to an unmarried Peter Parker would matter, as readers can believe that an argument can lead to a break up and that the break up will be permanent. with potential consequences decades later. This will be more effective if the writers can make any new romantic interests as compelling as Mary Jane.

Given how strong Peter and MJ's relationship has been and the iconic status of both characters, it was difficult for writers to create problems in the relationship without making one (or both) seem unlikable. Mary Jane has the patience of a saint, so Peter can't really be pissed at her, unless she were to do astoundingly stupid, and probably uncharacteristic. Peter Parker's unreliable because of his day job, where he has objectively saved more than ten thousand people. At the same time, Mary Jane should know by now what she's been getting into, so she can't really be mad at the guy considering all the lives he saves. It is possible to give them conflicts, and make both sympathetic. But it's difficult. And it's something that has to be repeated every now and then. 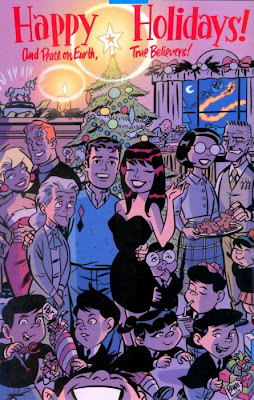 In terms of stability, the spider-marriage was equivalent to restricting Peter to one residence (one house in New York City) or one job (with a particular employer) in a permanent manner. There can be significant conflict, but the writers would be greatly handicapped. That said, just as there's no rule saying that Peter Parker always has to work for J Jonah Jameson at the Daily Bugle, there's no rule saying that he always has to be a photographer. JMS made him a High School Science teacher, followed by a job with Tony Stark. Guggenheim gave him a low-paying job in a comic book store. Zeb Wells had him take a taxi-driving exam. Mark Waid blacklisted him. He's also been outside of New York City, getting involved in an alien civil war with the Fantastic Four or fighting for his life in Boston. Future writers aren't also restricted from taking him out of the city.

Earlier I noted that there are some advantages to having one element of the status quo anchored in a particular way. Other elements of his life (where he lives, where he works, what the supporting cast is up to) aren't stable, so the writers could explore those avenues. But there is a significant restriction when the juggler suddenly has one less ball to play with.