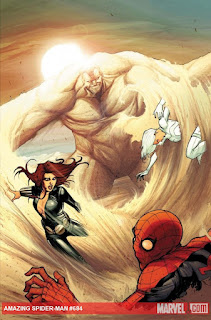 In this issue, it seems as thought the 'Ends Of Earth' story is finally picking up a little. The whole issue is mostly a showcase of Black widow, Sable, Spider-Man and Sandman. No one else in this issue really matters, except for maybe those over at Horizon Labs who play a pretty decent role in the issue.


We start with Sable, in her invisible costume, coming to aid Black Widow. Once she gets Widow out, she sets a bomb on the Avengers ship. ( After all, money comes from the skies for the likes of Tony Stark )

Silver Sable's plan is actually pretty decent as the explosion of the aircraft causes Dr Ock to lose concentration for a split second, allowing Spider-Man to escape with the help of Sable. (He was about to get killed.. as usual) Dr Ock decides to let Spider-Man go, as he has more important business, such as dragging the half dead bodies of the Avengers to his ship.

Anyway, Sable takes off her invisible cloak once the coast is clear, and brings Spider-Man and Black Widow into her 'Invisible Ship'. 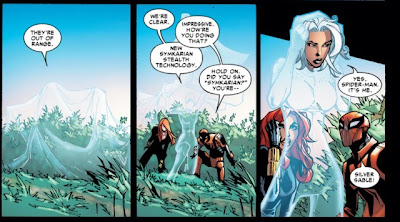 To cut it short, Horizon Labs later manages to patch through to Spider-Man from their ocean base ( yes, they have that). They inform him that Dr Ock is holding a meeting with the world leaders and is requesting payment of $2billion per Sinister Six member, and a clean slate with which they can start their lives over.

Just then the Symkarian President, who is at the meeting, leaks some info regarding Dr Ock's bases to Sable. The three decide to head towards the base in the Sahara desert. Spidey then gets the help of Horizon to come up with a way to defeat Sandman ( who will obviously be at the Sahara base)

We later find out that it was all a trap. There was nothing at the base but Sandman, waiting to pound them. After a pretty cool fight scene however, our team of superheroes manage to contain Sandman in a little bag of web fluid.

The issue ends with Dr. Ock making one last request, to make Spider-Man the world's most wanted felon.


Thoughts
The thing I like about this issue is that Electro never makes an appearance after being shot into space, making it fairly realistic. Honestly, I was half expecting him to show up as if nothing had ever happened. Instead, he actually stays lost in space, for one whole issue at least!

The art is fantastic, especially since I am a little biased towards Ramos's art style. I won't go into the details of how Spider-Man contained Sandman, but I have to say that it was pretty smart. It's good to see Spider-Man come up with new ways to defeat his enemies.