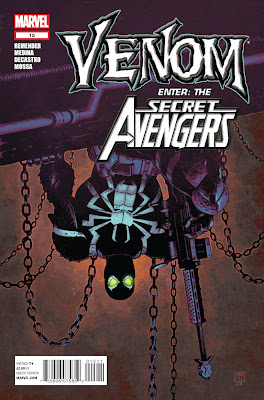 Hybrid, a symbiote spawned from Venom and currently bonded to Scott Washington, is killed in an alleyway by Eddie Brock, who is on a mission to wipe out "the alien plague."


At the Lighthouse (headquarters of the Secret Avengers) Giant Man and Beast reassure Flash Thompson, Captain America and Valkyrie that their serum can successfully sedate the Venom symbiote's mind controlling effects.  They also give Flash a special phone, which allows him to summon the symbiote in times of desperation.  Throughout the conversation, Flash has to fight the urge to bond himself to the suit.  As Valkyrie escorts Flash home, Giant Man asks Cap what he's going to tell Spider-Man about Venom's presence on the team.

After an awkward conversation, Valkyrie teleports Flash to his apartment just as Peter Parker knocks on the door.  Peter questions Flash about breaking up with Betty Brant and asks him where he's been the past few weeks.  Flash lies to Peter and tells him he's been drinking non stop since his father died.  Upon hearing this, Peter invites Flash out for coffee.

Scream, another Venom spawn bonded to Donna Diego, is lured into a trap and killed by Brock.


Flash and Peter have a heart-to-heart about the way Flash has been acting for the past few weeks.  Flash is about to tell Peter his secret when he gets a call from his sister and has to leave.  Flash visits his sister and mother, and apologizes to them for leaving so soon after the funeral.  Flash's mother scolds him for lying, and Flash is forced to lie to her again by telling her that he spent the last few weeks in a drunken stupor, unable to tell her about his activities as Venom.

Flash heads back to his apartment, deciding that he's going to try and patch things up with Betty.  He arrives to find Betty waiting for him.  She tells him that the two of them are done for good and leaves.

This was another one of those depressing, "come see how badly Flash's life sucks," issues that Rick Remender now has down to an art form.  Not that this is a bad thing.  I was worried that Flash's membership in the Avengers was going to solve too many of his problems, but that isn't the case at all.  Despite the Avengers managing to "sedate" the symbiote, Flash is still clearly trying to control his addiction to wearing it.  Not to mention the fact that his relationships have all taken a nose dive due to his alter ego, chief among them being his relationship with Betty.  Although I'm sympathetic to Flash, I gotta say I'm proud of Betty for finally breaking it off with him.  Their relationship has been nothing but toxic for her since this series began; she needs a more stable guy.  And was I the only one who got excited when Flash was about to reveal his secret to Peter?

Then there's Eddie Brock, who is taking out all the symbiote characters we forgot about after the 90's.  If there are still any Hybrid and Scream fans left, I would advise them to avoid this issue.

Joining Remender is Lan Medina on art duties.  Medina's pages look great, and have a very John Romita Sr.-esque vibe to them.

This is a great done-in-one issue that is perfect for newcomers and long time readers alike.  It successfully fills you in on Venom's current status quo while offering plenty of memorable moments.  If you haven't been reading Venom before, now is the time to start!
Read More
Newer Posts Older Posts Home