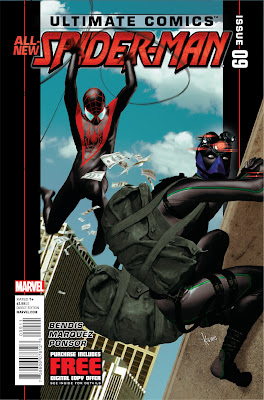 Captain Quaid warns Miles to cease his activities as Spider-Man before Miles is able to get away.

Meanwhile, the Prowler sneaks back into the Tinkerer's warehouse where he is confronted by the Scorpion and his men.  The Scorpion attempts to kill Prowler, but the Prowler is able to escape using the Vulture's wings.  Astonished by Scorpion's power, the Prowler realizes he's in big trouble.

In bed, Miles receives a text from his Uncle Aaron, telling him that if Miles does one favour for him he'll leave him alone forever and to meet him in one hour.

That just might have been my shortest story summary yet!  While this was another great instalment of Ultimate Spider-Man, like most Brian Michael Bendis stories, it's going to feel more like you got your money's worth reading it in trade form rather than in single issues.  I should mention that while I miss Sarah Pichelli, David Marquez is a great replacement as he delivers great work here.

100 posts!  Whoo!  Not sad at all!  Thanks Bryan for giving me the opportunity to write for your blog.  It's been a blast so far!
Read More

A touching tribute to the late, great Joe Simon. 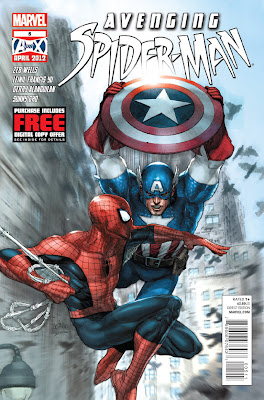 The Avengers find an old comic book that Steve Rogers drew in his spare time before he became Captain America.  As the Avengers poke fun at it, Cap walks in and tells them that drawing is in his past, and throws the comic in the trash.  Spidey tells Cap that he liked the comic, and after he leaves the room Cap picks the comic up from the trash and admires it.  Out in the hall, Spidey expresses his excitement to the rest of the team that Cap used to be a nerd like him. 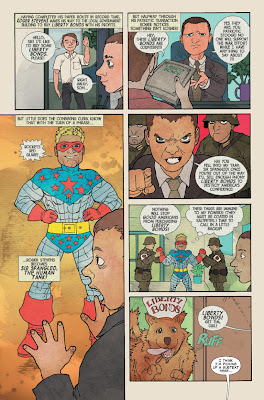 Later, the Avengers land in the jungle to take down the remaining members of the Serpent Society.  When Cap orders the Avengers to pair up, Spider-Man immediately calls dibs on him.  Spidey and Cap scope out and attack one of the Society's bases.  During the fight Cap does his best to ignore Spider-Man's frequent questions about high school and his artwork.  The two later rendezvous with the rest of the team and head back to the mansion.

Back at the mansion, Spider-Man surprises Cap by framing one of his comic book pages and hanging it up in his room, hoping that it would reawaken Cap's artistic side.  Cap tells Spider-Man that drawing is in his past, and that he wouldn't want to go back to being the scrawny, weak kid who drew that picture.  To cement his point, Cap asks Spidey whether he still uses his first chemistry set.  Upset, Spider-Man leaves the room, telling Cap that he does pull out his first chemistry set from time to time.

Later in his room at Avengers Mansion, Spider-Man prepares to toss his first chemistry set into the incinerator, but is stopped by Cap.  Cap shows Spidey some drawings he's been working on recently, and the two of them bond over them.

Zeb Wells delivered a beautiful done-in-one story here.  This story shows us that no matter how far we get in life, it's important not to forget who we were and where we came from.  Steve Rogers was someone who abandoned who he used to be when he got his powers and became the ultimate soldier, while Peter Parker has always remained in touch with his past life despite his powers.  In rejecting his artistic side, Cap was essentially rejecting who Peter was.  Reconnecting to his artistic side allowed Cap to reconnect with his humanity and to rediscover a passion he used to have.  This story is one of those rare instances where Spider-Man inspires Captain America and not the other way around.  Having Cap once want to be an artist is a great way to pay a tribute to his co-creator.

Accompanying Wells is Leinil Yu on art duties.  Although Yu always does a stellar job, I have to say that this comic book is the best thing he's ever done.  Each page is rendered in gorgeous detail; you can tell that a lot of love went into the crafting of this comic book.

Avenging Spider-Man #5 is a must buy for both Spidey and Cap fans.  While it's disappointing that Wells won't be doing anymore issues of Avenging (aside from a story to coincide with Spidey's 50th anniversary), I can't think of a better note to go out on than this.

The end of an era!  The final issue of Marvel Adventures Spider-Man! 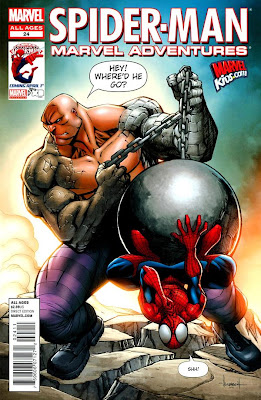 Spider-Man notices that a lot of the thugs he has captured recently are reappearing on the street.  When he questions one of them about this, the thug reveals that a dirty cop named James Rellman is setting crooks free after superheroes capture them, and that he's working for the Kingpin.  When Spider-Man confronts the Kingpin about this, he agrees to give Spidey Rellman's location, as he disproves of Rellman's recent independent criminal activity.  Spider-Man finds Rellman conspiring with his criminal buddies and calls the cops to his location.  With Spidey's help, the police catch Rellman red handed.  Spider-Man then visits the Kingpin, and warns him that the next time they meet, he will have the evidence he needs to take him down.

For its last issue, Marvel Adventures Spider-Man delivered its usual helping of kid friendly Spidey action.  While under normal circumstances this would be just fine, fans of this version of Spider-Man might be disappointed that the last issue didn't really leave them with a sense of closure.  While I haven't been reading this series regularly, I know that Paul Tobin has built a unique supporting cast for Spidey over the years.  Fans aren't given a proper farewell to the likes of Chat, Blonde Phantom, the Torino family and the other unique characters that populate this version of the Marvel Universe.

This issue marks the last we'll see of the Marvel Adventures line for the foreseeable future.  Although I understand why their doing it, there's something cold about Marvel ditching Tobin's version of Spidey for a T.V. tie-in.  I've always liked Tobin's work, so I hope we haven't seen the last of him at Marvel.

So long Marvel Adventures Spider-Man, thanks for giving a legion of young Spider-Man fans a fun first introduction to the character.  Your successor has a lot to live up to!  Speaking of, be sure to check back here for our review of Marvel Universe: Ultimate Spider-Man #1 (now there's a mouth full)! 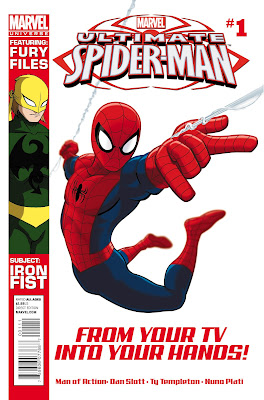