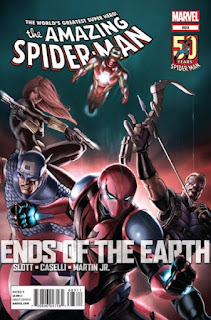 So, before starting this review, I must say that the cover for this issue has to be one of the best! Unlike a good number of people out there, I like Spider-Man's new armor. Sure, it does have a little of an Iron Man/ Red Hood feel, but I like Red Hood's helmet, so yea.


This issue starts '2 weeks ago' when the Sinister Six members are busy collecting seemingly unrelated items, as Dr Octopus has instructed.

Coming back to current time, Spidey leads Capt A. and Thor into a meeting between world leaders. They are discussing the next step in regards to Dr. Octopus's offer. Among those in the hall is Al Gore, who Spider-Man points out to actually be the Chameleon.

Just as the Chameleon is exposed, Dr Ock appears on the big screen ( he tends to do that), speaking to those at the meeting. He then tells them that he will teach them one 'final lesson.' Spidey think he's ready for the worst.

Instead of another disaster however, we find that Dr. Ock's final lesson is to fix global warming temporarily, proving that he can be trusted and that he truly does have a solution. This gains the trust and approval of the world leaders at the meeting. As a final request, Dr Octopus requests that Chameleon be freed.

Oh yea, I forgot to mention that somewhere in between all this, Horizon Labs gets shut down by our favorite mayor.

Anyway, Chameleon meets the rest of the Six at a random beach. When asked why the strange location, Mysterio points out a Spidey tracer on his back. A second or two later, the Avengers arrive, resulting in a serious battle. 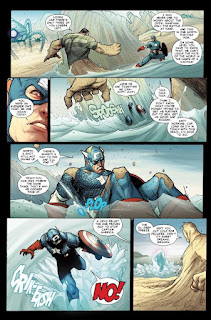 Among the interesting things that happen, Electro gets thrown into the sky by Thor, who is later stabbed through the back by Rhino's new horn, which is really a tooth of the Midgard Serpent. It doesn't end too well for the Avengers at the end of the issue. ( Even Capt A. gets iced)

Thoughts
This whole issue, in my opinion is simply an excuse to showcase Spider-Man's new suit. So lets go through what his suit can do.

Apart from this, nothing else major took place in this issue besides the shutting down of Horizon Labs. Other small things also took place like Black Widow crashing in a plane, but that's okay because she'll just come back out. There was also a special Silver Sable appearance. Think she'll come to save the day again? 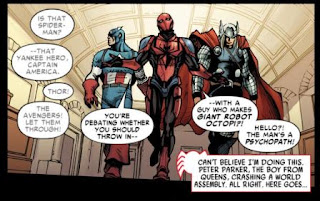