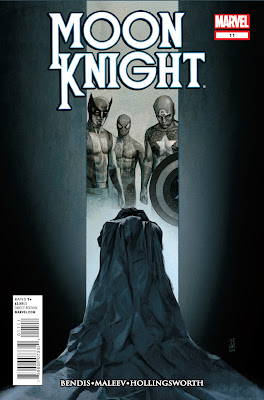 Moon Knight is then confronted by Echo, who speaks to him in his head.  She tells him to get back up and get the job done so that she did not die in vain.  Moon Knight awakens just as Madame Masque is about to kill him.  Taking her by surprise, Moon Knight is able to knock her out by hitting her head against a fire hydrant.  He then wakes up Buck, and the two of them flee the scene as the police arrive.

Count Nefaria watches all of this unfold on television.  His butler then tells him that the police are here and they have a warrant and a subpoena thanks to Moon Knight.  Nefaria is none too pleased.

Brian Michael Bendis and Alex Maleev have crafted something special with this story about a crazy, underdog superhero who gets in way over his head when he decides to take on a powerful superpowered crime lord.  I loved how Echo is now one of the personas that has taken up residence in Moon Knight's head.  It speaks to the broader notion that people are never truly dead when we remember how they inspired and motivated us.  With one issue to go, let's hope Moon Knight and Buck make it out in one peace!
Read More
Newer Posts Older Posts Home