Really sorry guys for not posting this sooner. I've just been a little busy that all. Anyway, here we are with another installment of Spider-Man - The world's greatest superhero. ( I'm really struggling to see how they came up with the title) 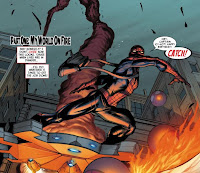 It all starts pretty simply with Spider-Man trying out his new gadgets to take out super crooks. Among his 'original' ideas are Spider-bombs and a Spider glider. For the first part of the issue, Spidey is pretty proud of himself for creating all these new inventions at Horizon that help him curb crime.

He also thinks to himself how he has designed special gadgets for each of the Sinister Six.

As Peter stands, admiring himself, he notices some commotion at Horizon. It turns out that Mayer Jameson wants to shut Horizon down. Obviously this is bad news for our Friendly Neighbor hood Spider-Man.

A few panels later, we see that Doc Octopus's brilliant plan is to speed up global warming, which he does! 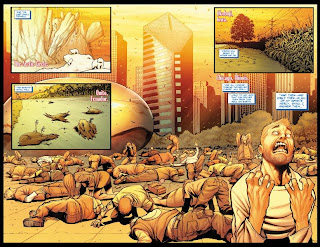 He then telecasts himself on every television screen, like most old school bad guys, and tells the world that he has a solution for global warming, which will come eventually, with or without him. He claims that all he wants is to be know as the man who saved the future. He then stops the global warming he created. ( convenient )

It appears that most of the world seem pretty interested to see what Doc Ock has to say. Even the Avengers are considering listening him out. We end the issue with Spider-Man gearing up to take on this new problem. He approaches the Avengers, telling them to take out Doc Ock ( who is obviously up to no good. ) 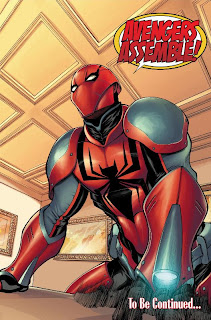 Oh, I forgot to mention Spidey appears with his new armor suit.

Thoughts
From my review, you can pretty much guess what I think of this issue. The story, for this issue at least, is way too simple. I mean, nobody threatens the world with global warming anymore! Sure Doc Ock is dying, but couldn't his final master plan be a lil more original?

Obviously, this is not all there is to his plan, so I still have hope for the story of this arc. Spidey's costume is pretty cool to me. Am definitely looking forward to see what it can do.

I'm also hoping we don't see anymore of this Spidey Glider! ( Unless its with a stand off against Osborn )
Read More 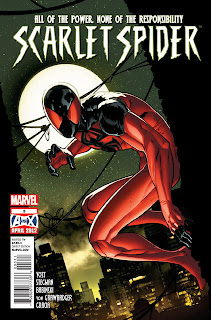 Scarlet Spider 3
Background: Previously Kaine successfully fought to save a young woman from a man possessed by a fire deity.With the citizens of Houston cheering his effort and at the urge of the local law enforcement, Kaine has decided to make Texas his homestead, at least for a little longer.

Story: It’s another tough day at the Houston hospital, as Dr. Donald has very unfortunate news to deliver. A man’s wife has died in a car accident and Dr. Donald was unable to save her. The man’s reaction to his wife’s death is that of fury and blame. He points the finger back at the Doc for being unable to save his significant other, causing a big scene and really guilt tripping the Dr.

Elsewhere in Houston, a certain person is being very observant of the ongoing activities below him, as a man from the shadows approaches a woman on her way home and pulls a knife. Thankfully, for her Kaine, in his Scarlet Spider costume is that person who was watching and grabs the offender taking him nearly to the rooftops.

Kaine proceeds to threaten and generally scare the piss literally out of this fellow, before dropping him like a rock, almost all the way to the pavement below, if not for catching him in a web net at the very last second. He demands that the guy never ever return to Houston again, or else.
After discovering that Houston doesn’t have quite as many Skyscrapers as NY, Kaine heads back to his hotel suite, or rather the bar at the hotel. He engages the bartender in a conversation regarding her ability to speak Spanish.

Kaine is about to take her inside his room when, the girl ( Aracely) from issues 1 and 2 attacks them with a(champagne? ) bottle. After Aracely settles down and realizes that they aren’t out to get her, Dr. Donald shows up to check on her condition.
The Dr. mentions how he needs to go back to the hotel to get some supplies (pretty vague) and Kaine for some reason decides to accompany him (how odd). Kaine’s suit is glitching in the sunlight (I guess this is just to remind people that its part electronic.) As they are about to leave, the Dr. thinking he sees something strange, sticks his head out the window, making him the perfect target for a sniper. Kaine tackles the Dr. to the floor just in time for a bullet to go whizzing past.

Kaine follows the bullet trail and tangos with the assailant, whose very well versed in short range combat. The fight escalates until Kaine demands to know who hired him. The gunman gets away by releasing tear gas on Kaine and when Kaine removes his mask to take a breath, the man is able to recognize him. We follow the sniper back to New Orleans where he meets up with the rest of the Assassins Guild. He tells his fellow members that he encountered Kaine and the apparent leader seems quite interested.

Review: Starting off like an episode of House, Scarlet Spider 3, victimizes a key character and snowballs from there. Death by accident is no doubt a traumatic thing and in this instance, an essential catalyst to the remaining story.

This issue illustrates the incredible burden and responsibility that Doctors and especially emergency physicians have to carry.
As an opening to a new story arc, this issue delivers a decent preview of what’s to come, but as a stand alone issue, I must say it’s a little underwhelming. Kaine has yet to establish his groove, so I will be very forgiving in my criticism.
The encounter with the assassin was really the most redeeming aspect in my mind. Just the fact that the assassin knows who he is gives the reader a reason to anticipate an explanation. Kaine gets to show off his superb acrobatics and resiliency, which is pretty satisfying to witness. Personality wise, Kaine has yet to show us his humanity, instead keeping in toe with his tough guy persona.

Scarlet Spider is yet another Spider-Man series but without Peter Parker, so I’m still waiting for the significance to unfold and really give this series a signature style. For instance, is it spider-man dark? Spider-Man rural?, Spider-Man ethnical ?,Spider-Man the mercenary? (No that would be Venom) So I’m really not sure how this fits into the showcase, but never the less I’m enjoying the experience. 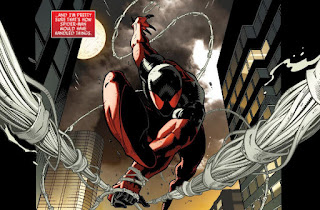