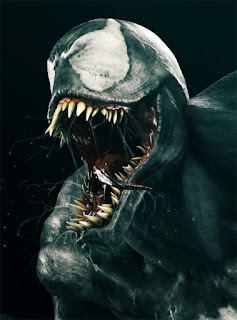 Previously we discussed the idea and possibility of a Venom solo film and weighed in on some pros and cons for making such a movie. I also commented on how the movie would need a sturdy backing from the Spider-Man franchise to get the ball rolling.


We also debated the use of Eddie Brock or Flash Thompson, determining that both candidates would make for a strong lead, yet brings unique elements to the table.
In this installment I plan on going into detail on what I believe to be a truly essential part to any action / super hero film: the villain.

Now that we have the groundwork for the movie established, it’s time to really stir the pot and mix in the ingredient that will set everything in motion; I’m talking about the foil, the antagonist, the opposite side of the coin. Before I bring up several figures I have in mind, let’s think for a minuet about what makes a great movie villain. The villain has to be a star in his own right, charismatic, dynamic, and have similarities to the hero.
The only major difference is that the Hero chose to do the right thing.
Prospect # 1: Carnage, aka serial killer Cletus Kassady. 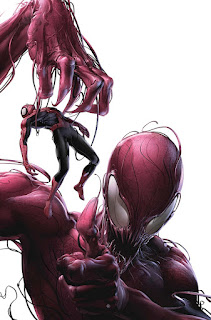 Carnage certainly has the charisma, often being compared to the Joker.
Carnage is a good choice because he represents chaos and hatred, where as Venom is always struggling to control his power and has compassion for the innocent. Eddie has always felt responsible for Carnage and no doubt has tried to snuff him out. Even going to back to his introduction as Eddie’s cell mate, Cletus was shown nothing but contempt from Eddie.
Comparatively, Carnage struggles with psychological machinations, something that has plagued Eddie on many occasion, but Carnage has no limitations to his violent impulses, which always leads to a very gruesome and horrific tale; perhaps even too graphic for a debut film series. He also has 1. A history with Spider-Man, and 2. A striking similarity to Venom.
As the 1st off spring of the Venom symbiote, Carnage represents a pure evil extract of Eddie Brock. The Carnage Venom feud is well documented and well known among fans, so it just seems like a natural fit. Even if Flash was put in the lead role, Carnage would still hold a place of significance, due to the fact that Carnage wants to kill the original symbiote, he even sees it as a threat, and vice versa for all other symbiotes.

Another potential downfall of using Carnage could be the amount of CGI required for all his transformations and appendages. Let us remember the overdose of poor CGI ruined the Spawn film in the late 90’s. Granted CG has come a long way since then, but that depiction still weighs heavy on some viewers. Now let’s consider the alternative.

Prospect #2: Jack O’ Lantern. This flying, flaming vigilante also has a past with Spider-Man but has recently cemented himself as Flash’s arch nemesis. Unlike Carnage Jack is a little more logical of a person. He takes orders from his Boss, Crime Master, who is no doubt footing the bill for his misdeeds. Essentially a terrorist, Jack has a certain swagger and playful persona twisted in a disturbing fashion.

He is the creepier of the two, whereas Carnage is a merciless killer, Jack would be more inclined to sneak up on you and torture you both mentally and physically. He doesn’t particularly have much in common with either Flash or Eddie but none the less he gives them a run for their money. Perhaps a little too similar to the Green Goblin, Jack O’ Lantern may not be the best choice to star opposite our big black alien friend, However, he would defiantly entertain an audience with his flashy approach to villainy and witty, colorful verbiage.

That about does it for worthy candidates, as the remainder of Venom’s foes seem like oddballs and redundant characters. That is why my top choice remains; Carnage.

Regardless of whoever the studio chooses as the bad guy, one thing is sure; he needs to downright terrifying. Fear will need to be a big factor in this movie, as I expect there to be plenty of opportunity for shouts and screams as teeth sink into flesh.

Well I hope you’ve enjoyed this installment and please let me know in the comments who you would like best as a Venom movie villain and why.