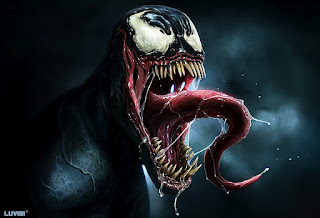 Last time we laid out a plan and foundation overall for a Venom based movie, citing that it would be wise to direct it as a action based sci-fi, and comparing the look and feel of the film to Aliens and Resident Evil.
We also discussed the pros and cons of having Eddie Brock as Venom. This time we will dive into the idea of casting Eugene “Flash” Thompson as the star.

Having Eugene as the key character opens up a whole world of possibilities. For starters, his connection to Peter Parker from early on makes him the perfect rival. It would be easier to integrate him into a Spider-Man screenplay, allowing for a smooth transition into his own feature film.
Audiences already have a certain familiarity to his character, and one that hasn’t been stained (unlike Eddie Brock from SM 3) His character could certainly be expanded upon, as his comic book persona comes and goes with usually only loose ties to the plot. However recently, Flash has been thrust into the spotlight with his own successful ongoing series, which could pretty easily serve as the ground work for a movie version.
If the movie were to use Flash as its titular star, no doubt it would have to take on a more military style, which we’ve become accustomed to seeing in such sci-fi films as Battle: Los Angeles, Predator, and even War of the Worlds to some degree.

Flash has a very compelling story as a war vet. , who gets a second lease on life, but it’s not all sunshine and lollipops; there’s also a catch. I think this premise could work very well as we’ve already seen it play out nicely in “Avatar”, wherein a soldier gets his legs back in exchange for a return to active duty.

Another benefit to using Flash is that he has a better supporting cast. Betty Brant his long running girlfriend plays the part of the worried and conflicted house wife waiting for her husband to return home from god knows what. In the comics Flash keeps his double life a secret, but in the film Betty could always be on the verge of finding out or just very suspicious.

As an anti hero I believe Flash has a greater role in that he fights global terrorism and doesn’t even get to take the credit, where as Brock mostly dealt with punishing street thugs, small time crooks, and protecting innocent civilians.

Another interesting bit of info supporting Flash is that he grew up idolizing Spider-Man and always wanted to be just like him, that’s why he joined the service, and ultimately lost his legs in an explosion. So, similar to the recent Captain America, Flash gets offered the chance of a lifetime, to be reborn as the veritable super soldier, although his version is a whole lot more experimental and volatile. Flash even seems kind of like a hard luck Steve Rogers, all the more reason to use him in this fashion.

In order to really get the audience on the main character’s side, he would have to be coming from a really hard place and going through a major uphill battle, overcoming a tragic past, etc. I think both Brock and Flash have that history, Flash with his drinking, and Eddie with his violent tendencies, and both with abusive fathers, so it’s almost a toss up for me.
Bottom line, it doesn’t matter so much who they decide to go with, just so long as they include these important story elements.

I really hope you’ve enjoyed this discussion so far, as I’ve put a lot of creative thought and careful attention to it. Please let me know if it’s something you’re enjoying and want to read more of. 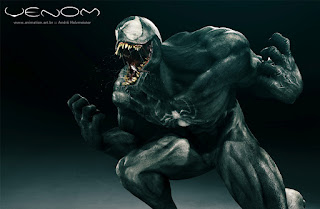 A scorpion stinger attached to a chain???  I take back what I said, the new Ultimate Scorpion is pretty cool. 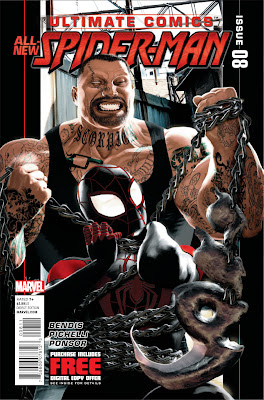 In Paris, Aunt May and Gwen Stacy are shocked when they see a new Spider-Man on the front page of a newspaper.

Miles tells Ganke to go back to their room so he can talk to his Uncle in private.  Uncle Aaron tells Miles he knows he's Spider-Man and that the two of them need to work together.  Before Aaron can continue, he is escorted off school grounds by security, as his name is not on the visitation list.

At the New York Police Department, Captain Quaid interrogates the Kangaroo (captured by Miles back in Ultimate Fallout #4) and asks him to reveal everything he knows about the new Spider-Man.  Meanwhile, the Scorpion attacks a group of New York's crime bosses looking for the Prowler.  After killing one of the bosses, Scorpion decides he wants to be the new kingpin of crime.

Miles can hardly concentrate in school, still reeling from the conversation he had with his Uncle.  He sneaks out at night as Spider-Man to figure out what to do, and comes across a robbery being committed by the Ringer.  Spidey is able to defeat the Ringer before Captain Quaid arrives on the scene, asking to talk to him. 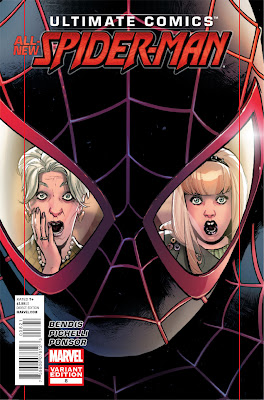 This issue marks Sarah Pichelli's return to the series, and she has been sorely missed.  Her knack for both big action scenes and quiet character moments make Ultimate Spider-Man the best looking Spidey book on the stands.  Given the calibre of artistic talent on the other books, that's saying something.

Miles' relationship with his uncle continues to be the most interesting aspect of this series.  Given how Aaron has essentially brought the Scorpion to New York, I'm looking forward to seeing how these plotlines converge.  Not sure what to make of Captain Quaid.  It looks like Brian Michael Bendis is setting him up to be Miles' George Stacy, but we'll see what he has in mind.