To be honest, this was a pretty okay issue. A lot of people on the discussion boards think it fabulous, primarily due to the Human Torch/Spider-Man team-up. I've never really been one to care for Johnny Storm, so unfortunately the team up doesn't add any points for me.

The Story
It starts with Mayor Jameson at Horizon Labs, starting s 'skype' conversation with his son, who is on a mission in space on The Apogee 1 space station. At the start, things are going well, and Peter takes a moment to observe how happy and proud Jameson is of his son. All that changes when the line is cut and the system starts failing.
Peter rushes out of the room, changes into Spider-Man and heads straight for the Baxter building. 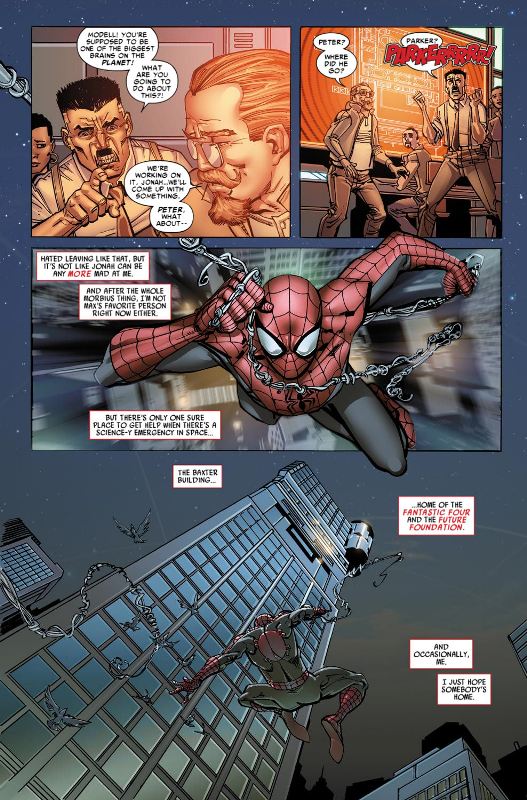 Over at the Baxter building, Reed, Sue and the Thing are all out, leaving Johnny alone to rock out to " Friday"- by Rebecca Black *wtf*

Although seemingly reluctant at first, Johnny joins Spidey and they both take a rocket up to space. Obviously, the comical dialog between the two clowns adds value to the issue. In one scene though, Spider-Man thinks to himself how Johnny has changed a little, becoming slightly more serious since his death.

Back at Horizon Labs, Mayor Jameson blames Max and Horizon Labs for that matter, for everything that has happened. He also claims that Horizon Labs is dangerous for New York. * Could this be the start of the end to Peter's dream job?*

Over at Space, Spidey and Human Torch reach the Space Station. At once, they realize that the station is empty and that there is no one on board. Spider-Man's spider sense go off and the two are soon confronted with about a million octobots.

Initially, Torch tries burning them, but soon stops as Spider-Man tells him that he is burning the limited oxygen available in the station. Spider-Man then tries to web the bugs, but fails as his webbing isn't working thanks to zero-gravity.

The two are eventually saved by John Jameson, who zaps the bugs with his gun. Over at Octavius's base, Mysterio notices that several hundred bugs have gone offline for a few minutes. Octavius tells Mysterio to complete the mission, then destroy the Space Station in 20 minutes.

Back in Space, John has taken Spidey and Torch to where he has been hiding. It doesn't take long before they are spotted by the rest o the crew - who have now been zombified / had their brains taken over by octobots. 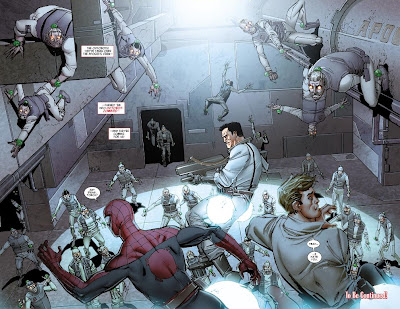 Thoughts
Like I said at the start, the Spidey/ Torch didn't do much to impress me. For those who are a fan of such team ups though, this would be a great issue. I'm not a big fan of Spider-Man in Space in general. I think he belongs down in the city, (Which is why he's based there anyway).

I'm also not really sure how he got the tag line "The galaxy's greatest superhero" on the cover.

An occasional adventure elsewhere, like this one, could be fun once in a while though. I have to say that the art for this issue was definitely far above average, with the exception of Ramos drawing style whom I am biased towards. Colors were excellent as well. It was nice to see Jameson proud and happy in the first panel, although that was short lived. * Just look at the scan I put up earlier *

As I predicted somewhere in my review earlier, I have a feeling Jameson will force the shut down of Horizon Labs, thus ending Peter's good luck run.  ( Then again, I am no expert at these predictions )