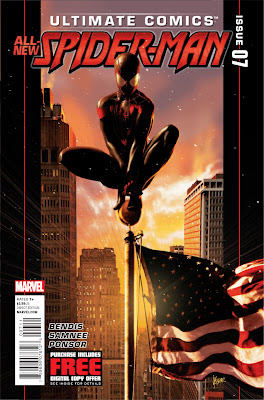 Miles studies footage of Peter Parker fighting Doctor Octopus and attempts to replicate the moves in his bedroom.  Miles' mom nearly walks in on him, wondering what all the noise is about.  After finding her son sweaty and sitting in front of a computer screen, she decides she doesn't want to know.  Later that night the Morales family has dinner and the subject of the new Spider-Man comes up.  Miles' father doesn't like the idea of a vigilante doing whatever he wants, but Miles' mom thinks that Spider-Man is a hero.

Later on, Miles goes on patrol and sees an explosion across town.  Investigating, he comes face to face with Omega Red in the midst of a robbery.  Miles is able to defeat the villain with his venom blast.

Meanwhile, the Prowler (AKA Uncle Aaron) sneaks in to the Tinkerer's workshop and threatens him with a gun, demanding to know why his getaway jacket malfunctioned.  After the Tinkerer explains that the jacket was only designed to work once, Prowler asks the Tinkerer to give him the same technology he gave Spider-Man, thinking him responsible for the new Spider-Man.  The Tinkerer tells Prowler he's not responsible for Spider-Man, explaining that Spider-Man got his powers after being bit by one of Norman Osborn's genetically altered spiders.  Remembering the spider that bit Miles, the Prowler shoots Tinkerer dead.

The next day, as Miles describes his fight with Omega Red to Ganke, the two are confronted by Uncle Aaron.

If I'm not mistaken, this is the first issue where Brian Michael Bendis actually makes us privy to Miles' thoughts, finally giving the reader a connection to the character that we were all used to having with Peter Parker.  I'm glad he did, as reading Miles' thoughts as he tests the limits of his powers and as he fought Omega Red was the best part of the issue.  The situation with Uncle Aaron has gotten more interesting, and I'm excited to read the conversation he'll have with Miles next issue.


What's great about this series is how Bendis has taken many of the elements we identify with Spider-Man; wise cracks, embarrassing moments, personal problems, and has made them all work with Miles Morales without making him a Peter Parker clone.  Bendis gets you invested in Miles' unique problems and supporting cast, making him a character you instantly root for.  Needless to say, this was another great issue of Ultimate Spider-Man.
Read More
Newer Posts Older Posts Home