The heroes face off with Mephisto! 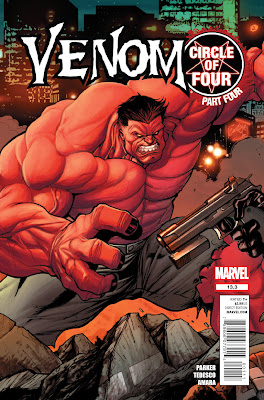 In Hell, the four heroes each experience what they desire most: Ghost Rider returns to Mexico with her family, Flash's symbiote permenantly bonds with him (with him in control) and he becomes the new Spider-Man, Red Hulk is recognized as a hero and given his own team of Hulks to lead, and X-23 kills Blackheart and destroys the rest of her clones with Wolverine. However, each fantasy ends tragically, and the four heroes are then confronted by Mephisto.  Mephisto explains that he does not want his son ruling Hell on Earth, and since no one can technically "die" in Hell, he is able to send the souls of the heroes back to Earth.  He says that he'll do this in exchange for a favour that he will decide upon later.  Everyone accepts the deal.

Warning: if you're one of those people who's still hysterical over Peter Parker making a deal with Mephisto in One More Day, seeing four heroes do it might make your head explode.*

Not much happens this issue; though the deal the heroes make at the end certainly suggests that we'll be getting a Circle of Four sequel in the future.  While it's been fun watching these four unlikely heroes team up for the first time, will it really be as fun the second time when the novelty has worn off?  I guess we'll have to wait and see.  Julian Tedesco does a great job handling the art duties this issue; his Mephisto is badass.

*Relax, I'm kidding.  Please don't explain to me why this is "different." 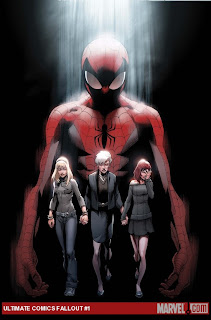 Better late than never they say. So here goes.

Ultimate Fallout issue 1
The story:
Spider-Man is dead. Peter Parker fell in combat as he defeated the Green Goblin in issue 160 of Ultimate Spider-Man. This issue begins with some of the principle characters in Ultimate Spider-man’s universe trying to deal with his death. Gwen Stacy, Jonah Jameson
The Human Torch, Kitty Pryde and Mary Jane are all trying to find a way to make sense of Peter’s death and how it affects them.
We then switch to Aunt May, Gwen and Tony Stark in a limo on the way to Peter’s funeral mass. May doesn’t want the funeral to be a big thing but Stark tells her she might not have much choice in the matter as thousands of New Yorkers wait outside the cathedral to pay their respects to the fallen hero.
As May gets out of the car and approaches the church a child engages her in conversation and tells her how Spider-Man saved her life. Touchingly, she offers May a hug.
May enters the cathedral and takes her place in the front pews and is approached by Steve Rogers (Captain America) who tells her it’s his fault Peter died.
Thoughts:
You’ve got to hand it to Marvel, the company is expert at squeezing every drop out of a major storyline. “The Death Of Spider-Man” in the Ultimate line is no exception. If you want the full picture you also have to empty your pockets for Ultimate Fallout (six issues) and the story also crosses into Ultimate Avengers Vs New Ultimates (six issues). And you can add all that to the current five issue story line in Spidey’s own Ultimate comic.
In fairness, though, to Ultimate Fallout it more than justifies its existence. I thought issue one was very strong and packed more of an emotional punch than I expected. We see some of the principle characters in Peter Parker’s life are coming to grips with recent events. However, the best scene in the comic is when a little girl tells May how Spidey saved her from a fire. She then asks May “Do you want a hug”. It’s a great moment and while you know Bendis and Bagley are manipulating your emotions – it’s ok. It’s a funeral, it’s a sad occasion and under the circumstance it’s allowed. 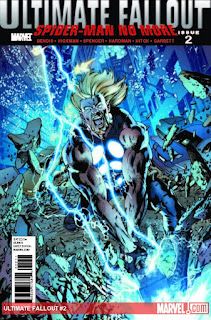 Ultimate Fallout Issue 2
The Story:
Issue 2 takes up right where issue 1 left off. Peter Parker is dead and Aunt May, Gwen Stacy et al gather in what looks like St Patrick’s Cathedral (it’s never named) for his funeral mass. At the end of issue 1 Captain America commiserated with May and told her it was his fault Peter Died.
Cap tells May that he told Peter he wasn’t ready to be a superhero and that he needed training. Also the bullet Peter eventually died from was meant for Cap and Peter jumped in front of him to save his life.
May reacts furiously and tells Captain America that Peter was doing fine before the Ultimates came along. She slaps Rogers across the face, leaves the church and collapses outside.
There she is assisted by Jonah Jameson who escorts her back in.
The action then shifts to Thor who is also attending the ceremony. His thoughts drift to Asgard, heroes and friends who have lived and died and the rewards that wait for them in the Great Hall of Valhalla where legends never die.
We then switch to Rogue. She’s in a diner and watching coverage of Peter’s funeral. Distressed she leaves the eaterie and begins to think back on recent events such as the death of many of her fellow X-Men. She flees to a church and begins to pray as she believes the end of the world is nigh.
On the last page we return to Mary Jane who is at home blogging an expose of how Peter died and who she believes was ultimately (geddit?) responsible for it.
Thoughts:
Not as strong as issue one but Aunt May’s excoriation of Captain America and the powers that be is worth the price of admission here. Here is one of the great WWII heroes put in his place by a grieving woman who does not hold back what she thinks of him and his bosses.
The weaknesses in this issue centre on the detours it takes with Thor and Rogue before coming back to the more familiar characters of Ultimate Spider-Man.
These detours are setting up the next phase of the Ultimate universe and we can no doubt expect many characters to return from the dead over the next few months.
Another problem I had was the artwork. Every story segment seemed rushed. Even a stellar talent such as Bryan Hitch didn’t come out of this unscathed. His segment (Thor) didn’t do him any favours and looked quite ugly in places.
Still, there’s just enough forward momentum here to keep me keen enough to move on to issue three. 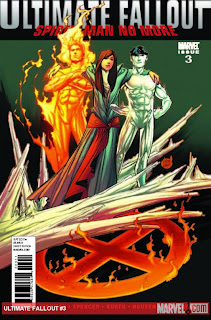 Ultimate Fallout Issue 3
The Story
Issue three kicks off with Tony Stark attending Peter’s funeral yet remembering his brother Gregory’s memorial service a few days earlier. There he was asked to a meeting where he was asked to join the Kratos club a select elite of 50 of the best business people in the world who want to make sure the “right things get done”.
With Tony pondering his decision to join we switch to Kitty Pryde. She’s getting so frustrated at Peter’s funeral that she decides to leave. She takes a walk through Central park where she meets Bobby Drake(Iceman) and both decide to hide out from society and not to engage in super heroics. Bobby and asks if Johnny Storm (Human Torch) can come too.
Cut to Bruce Banner in therapy and reliving some of his more well-known Hulk-out episodes.
His therapist then hypnotise him and Nick Fury enters. He asks the therapist can she control Banner. She says she can despite it becoming more difficult each session. Fury tells her she’ll be hearing from him.
Thoughts:
And here is where Ultimate Fallout and I part company. The focus in this issue is on setting up what’s to come in the new Ultimate line rather than on Spider-Man. Despite some interesting creators being lined up to tackle the Ultimate universe I’m not that interested in it. And the thought of three more issues of teasers and preludes isn’t enough to encourage me fork over my “hard-earned” to partake. If, however, you’re getting jazzed by what lies in store for the Ultimate line then this will probably tickle your fancy.