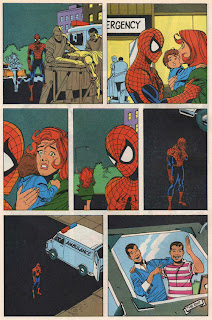 There are two arguments against the current direction of the Spider-Man books which tie into the character's rich history and the reader's participation. One complaint is that because of One More Day, the stories in which Peter and Mary Jane were married no longer matter, so it was all a waste of time and money for readers of those books. Another is that because of a retcon, the backstory may be too confusing. I've written on the latter point in earlier posts, suggesting that retcons don't require undo mental gymnastics from the reader, that it's unlikely that writers could be scared away by the backstory, and that complaints about how One More Day affected classic stories were largely exaggerated.

Newer readers can certainly be scared by continuity if it's handled poorly. It's problematic if you need to know decades of backstory to understand what the hell is going on. When someone blasts continuity, they're either talking about that, or glaring contradictions/ errors.

While the undoing of the marriage is the most obvious result of One More Day, there were a few other regressions, in the course of 30 pages. Spider-Man's identity was a secret again. The mechanical webshooters were back. And Harry Osborn was no longer dead. And no longer married, either.

But Amazing Spider-Man readers, new and old, should currently have been able to understand the framework. The status quo and the basic rules had been clear from the start. There were some questions about how we got to that point, but that's never essential, as we were given the information necessary to appreciate an issue on its merits. Arguing that it was required to know in the first issue of Brand New Day how Peter reacted to Harry's return from the dead is sort of like arguing that the Lee/ Ditko run can't be considered be great, because they never explored the circumstances under which Peter Parker came into the custody of his elderly Aunt and Uncle. As a result, one could claim that the readers could not fully appreciate the relationships between those characters, to say nothing of Peter and Liz Allen, or Peter and Flash Thompson.

The fact that there were some questions about how the continuity worked indicates that earlier stories still mattered, and contradicts the suggestion that One More Day completely undid twenty years of continuity. Some detractors view their inference that the stories they enjoyed “never happened” as a personal insult, one which would mean that they’ve wasted their time on the Spider-Man franchise.

First, if you enjoyed the stories, you didn’t waste your time on them, regardless of whether or not they’re in-continuity. If you just read sub-par comic books to follow the progress of your favorite character, you probably did waste your time and money, and I'd rather not have these tastes dictate the financial decisions of comic book companies.

Even if the stories in which Peter and MJ were married were never referenced, it still happened, as One More Day provided an in-continuity explanation, meaning the stories could be referenced by future writers. As a result, the material was more relevant than the adventures of the Golden Age DC heroes when it was established that they lived in the comic books of the Silver Age heroes; this predated the more famous Earth‑1/ Earth‑2 retcon. That was acceptable at a time when the most common solution to any continuity problem was what a few individuals have advocated: just changing the status quo without warning or explanation. DC's success after Crisis of Infinite Earths and Flashpoint suggested that new and existing readers can be drawn to post-retcon material.

But the stories in which Peter and MJ were married were still referenced. It didn't all happen exactly the way it was shown on the page, but it was close enough. Spider-Man still crawled out of the grave thinking of Mary Jane. Mary Jane still talked Harry into rescuing the drugged Spider-Man. Harry was still pronounced dead. Venom still scared Mary Jane into talking Peter into getting rid of the Black Costume. The vast majority of the stories still occurred pretty much the way they were originally written, just with the leads being together, but not married. 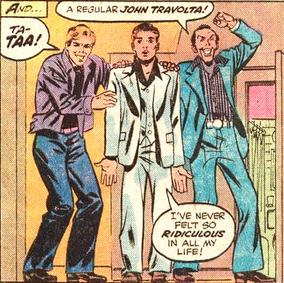 Technically, it still happened that way to the pre-OMD Peter Parker. As has been noted, One More Day did not do anything to affect anything on your bookshelf. The Peter Parker in the current Amazing Spider-Man just experienced everything slightly differently.

I have noticed that some fans support retcons which reveal that everything happened the way it was done on the page, and that there was just new information readers weren't privy to. The favor I've seen of the  Parallel Lives retcon would be one example. But it's often weird to try to reconcile earlier material with a new context that often changes the motivations of characters in ways the earlier writers hadn't considered.

There is a simple solution to avoid the "the last twenty years didn't matter" criticism: have either Peter or MJ  remember the world as it was. In that case, the comics of the last twenty years would still have an unambiguous relevant impact upon the new stories, and this could also open up new material. Whoever remembers the world as it was is in an awkward position if the other is happy in a new relationship.

Marvel does have some reasons for not going with that approach. It would likely increase expectations of a permanent reconciliation between Peter and MJ, as it's easier for the two to get back together if they remember exactly what went wrong. And it would make things confusing for new readers, if a character references memories that no one else is aware of.

I don't think that the retcon changed the backstory in a signficiant way. Peter and MJ still loved each other when they got married and were likely to stay together until death do them part. Anything that preserves this isn’t an insult to the readers. It's the same way Norman's return changed nothing about his motivations or his character. He still killed Gwen, and in that final battle he was undone by his own arrogance. His survival really doesn't matter, except we later got some good stories out of it. If the marriage were undone with the reveal that MJ were revealed as a Skrull, or commited infidelity then that could have been seen as an insult, as it violates the cores of the characters as seen in some good comic books.

If One More Day was undone, some elements of the narrative would be cleaner. Readers wouldn't have to consider how Peter and MJ might remember an event happening differently, following the retconning of the marriage. And even bad stories with a married Spider-Man would unambiguously remain part of the character's history.

But there would be some problems. The narrative wouldn't be that simple, considering all the stories that have happened since One More Day, many of which require Peter to not be in a relationship with MJ. As the most recent era of the Spider-Man books, it's the most readily available for new readers, which makes it difficult for Marvel to ignore it completely, even if they decide that the entire period was a huge mistake. An explanation would have to be provided to tie those stories into a new continuity in which OMD happened differently.  Eventually, you're going to get to the point in which readers are more familiar with the post-BND era Spider-Man than the marriage, so undoing OMD could alienate those guys.