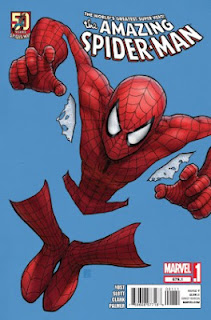 I really don't know what the big deal is with all these 0.1 issues, but here's a quick review of what takes place.

Story
In this issue, we are introduced in more depth to a fairly new character who works over at Horizon Labs - Uatu. Uatu is essentially one of those guys who linger in the background that nobody really notices. Just like how Peter was supposed to check out the math for Grady in Amazing Spider-Man 679  Uatu was supposed to check the math for one of Peter's inventions.

While, trying to prevent Uatu from hurting himself on one of his inventions, Peter cuts himself, causig some blood to drip close to the air vent. We see, on the other side of the air vent, our mysterious scientist who works in lab 6 - Morbius, picking up the scent of blood.

The next day, both Peter and Uatu notice Max Modell coming out of lab six, visibly unhappy. Peter decides to once and for all sneak into lab 6, as Spider-Man and find out who works behind the closed doors.

Sneaking through the air vents, Spider-Man witnesses Max, speaking to Morbius, who is losing control of himself due to his hunger for blood. Together with Max, the two have been working on a solution, to create artificial blood that will satisfy Morbius' cravings ( and save lives if introduced to the medical world). In the meantime however, Max offers some of his own blood in several test tubes to ease the cravings.

Unfortunately, as Morbius drinks the blood, he loses control and tries to attack Max. Spider-Man intervenes, knocking over the rest of the blood samples, increasing the scent of the blood in the lab. Morbius, loses it completely and crashes through the lab door, fighting Spider-Man.

Uatu's face lights up when he hears that there is a vampire in the building. He rushes to his own lab ( lab 5 ), where he keeps his inventions - weapons to fight werewolves, zombies, ghouls, and vampires. 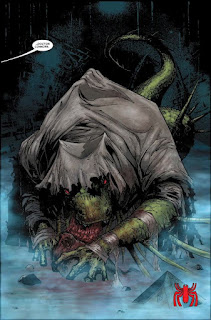 With Uatu's help, Spider-Man is able to subdue Morbius. We later see Morbius, leaving his lab, desperate for a test subject, hoping to quickly develop a cure. He goes down to the sewers to find Dr Connors -  The Lizard ( in his Lizard form).

Thoughts
I thought this was a pretty good issue. We last saw Morbius in Amazing Spider-Man 622 where he was using Spider-Man's blood to create a cure for a werewolf. ( Edit: Actually, we last saw him during Spider-Island, but Spider-Man last saw him in ASM 622) While Uatu didn't really catch my attention, his gadgets and weapons, specifically designed to kill Vampires were pretty impressive.

Obviously, the winner for the issue was the reappearance of Dr Connors. It's been a while since we last saw him. With the Amazing Spider-Man movie coming out, featuring The Lizard as the main villain, I think it was a pretty smart move of Marvel to reintroduce him, in time to make an appearance before the movie possibly.