I gotta say, I'm not a fan of Hawkeye's new costume.  It looks just like Green Arrow's latest costume (of which I'm also not a fan of).  The only thing that differentiates them are their colour schemes! 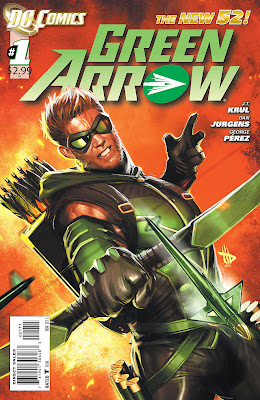 Captain America entrusts Spider-Man with training Hawkeye on how to properly go out on patrol.  So...  Spidey meets Hawkeye in Central Park and the two of them go out on patrol!
Later that evening, Spidey and Hawkeye come across members of the Serpent Society trying to break into a chemical wholesaler.  Hawkeye quickly knocks them all out with some electric arrows much to Spidey's annoyance, as they now have to wait for one of the thugs to wake up in order to question them.

One of the thugs told Spider-Man about a van that's supposed to transport hazardous materials to the Serpent Society.  Spidey attempts to intercept the van by blocking the road with his webbing.  But before the van can reach the web, Hawkeye hits the tires with his arrows causing the van to crash, knocking out the driver.  Once again, Spidey and Hawkeye have to wait for the driver to recover so they can question him.

The driver revealed that the Serpent Society is planning to launch a snake gas attack on Grand Central Station.  As the two of them wait for the Society to strike on a nearby rooftop, Spider-Man becomes frustrated by Hawkeye's restlessness and asks him if he can sit still for five minutes.  Hawkeye tells Spidey that he can never stop training, and that being a perfect archer is what makes him worthy of being on a team of super beings; if he misses, he's nothing.  Spider-Man then spots Sidewinder (leader of the Society) with his binoculars.  Sidewinder is carrying a grenade launcher to deliver the gas.  Before they can move to stop him, Spider-Man and Hawkeye are ambushed by Serpent Society thugs.  Hawkeye tells Spider-Man to take out the thugs so he can get a clear shot at Sidewinder despite him being 700 yards away.  Skeptical that Hawkeye can make the shot, Spidey jumps off the roof and races towards Sidewinder.

Back on the roof Hawkeye is able to take a shot before being overwhelmed by thugs.  The arrow misses Sidewinder but distracts him long enough for Spider-Man to knock him out.  Hawkeye radios Spider-Man to ask him if he made the shot.  Not responding, Spidey takes the arrow and places it on Sidewinder.  When Hawkeye arrives, he gloats about making the shot and states that Cap knew what he was doing putting the two of them together. 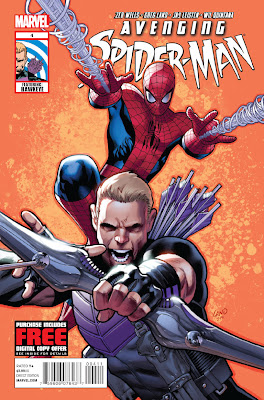 After a strong opening arc, I'm sad to say that this issue of Avenging Spider-Man fell a little flat for me.  There was nothing particularly wrong with it; Greg Land's artwork looked great and the ending took me by surprise, but I didn't have as good a time as I did with the last three issues.  This issue was mostly made up of banter between Spider-Man and Hawkeye, and while the banter is solid, it's not entertaining enough to carry the entire issue.  It's too bad Zeb Wells couldn't find a way to work Jameson into the plot!

A solid issue of Avenging Spider-Man, but there are better books out there worth your $3.99.
Read More
Newer Posts Older Posts Home