Alright folks, catch up time!  Our friend Combustible Pumpkins has given himself the daunting task of reviewing as many Lizard stories as he can in anticipation for the new Spidey flick, which means I get to review Venom for the time being.  So let's see if the first half of Circle of Four is worth your hard earned cash! 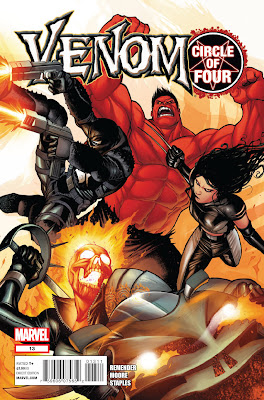 We begin in Las Vegas, with Flash Thompson in a hotel room, drinking and yelling at his girlfriend Betty Brant on the phone.  Flash tells her they're through, and then smashes the phone against the wall.  He tells himself it's for Betty's own protection. 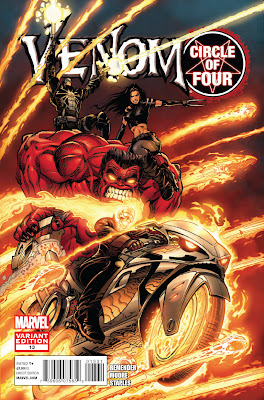 Meanwhile, at a casino called the Devil's Den, a man with a thirty two thousand dollar debt named Mr. Rags is brought to see the casino's owner Mr. Degli, who offers to absolve him of his debt in exchange for his soul.  Mr. Rags agrees, and is quickly strapped to a chair to begin the painful soul extraction process.
In the desert, Johnny Blaze is trying to teach the new Ghost Rider a few tricks, while the Red Hulk closes in on Venom.  Meanwhile, X-23 is posing as a waitress at the Devil's Den; she wants to kill Mr. Delgi who stole a sample of her blood.

At an amusement park under construction, Mr. Delgi and his girlfriend initiate their plan to bring about Hell on Earth using a large circular gateway called the Centrifuge.  Using one hundred human souls, a sample of the Toxin symbiote and X-23's blood; all Mr. Delgi needs is the Ghost Rider to complete his plan.

The Ghost Rider senses what Delgi is doing and heads over to investigate.  Believing she's in over her head, Blaze phones an old friend he thinks might be able to help.

Red Hulk bursts through Flash's hotel room demanding that Flash give him the symbiote.  Needless to say, a fight ensues.  Meanwhile, X-23 enters a secret room at the casino and discovers that Belgi has created symbiote/clone hybrids based on her DNA.  The hybrids escape from their test tubes and attack X-23. 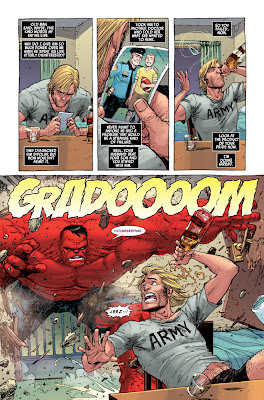 Venom and Red Hulk quickly notice demons springing up from everywhere and agree to work together to stop it.  Meanwhile, Blaze places a magical amulet at the outskirts of Las Vegas, creating a barrier that stops Hell from spreading beyond that point.

Delgi and his girlfriend fly up to their newly formed tower, where they reveal their true forms as Blackheart (son of Mephisto) and Gari Oyle (like a gargoyle, but uglier), respectively.  Blackheart gloats to his father (who is still in Hell) about what he has accomplished, but Mephisto is unimpressed, since not all of Hell has made it to Earth (thanks to Blaze's amulet).

Blaze reaches the Centrifuge and takes Ghost Rider's place in it, telling the Rider to go clean up her mess.

The four heroes all arrive at Blackheart's tower at the same time.  Using a magic mirror, Blackheart is able to summon each hero's antithesis: Ichor, X-666, the Evangelist and Encephalon.

Doctor Strange and Daimon Hellstrom attempt to investigate what's going on in Las Vegas but find that they cannot get passed the barrier created by Blaze's amulet.  Meanwhile, Blaze is having a hard time holding together riding around in the Centrifuge. 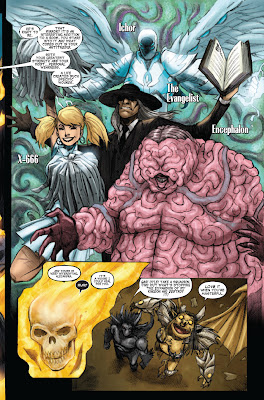 Blackheart orders Gari Oyle to find and destroy the amulet.  He then orders the antitheses to kill their counterparts.  Red Hulk orders Ghost Rider to follow Gari Oyle, an order Ghost Rider grudgingly obeys.  Ichor quickly follows her.  Venom is quickly defeated by the Evangelist, who takes control of his symbiote and taunts his handicap and alcoholism.  X-666 dominates her fight with X-23, telling her she's just a soulless killer.  Encephalon uses his psychic powers to throw the Hulk around and control his emotions, making him cry for his mother.

As Ghost Rider pursues Gari Oyle, Blackheart offers the Rider a deal: he will restore the souls of the people in Nicaragua (something the Rider is responsible for) in exchange for her servitude.  Before she has a chance to contemplate the deal she is attacked by Ichor.  The Rider is quickly able to kill Ichor and continue her pursuit.

Outside of Vegas, Doctor Strange senses that the heroes aren't doing so well... 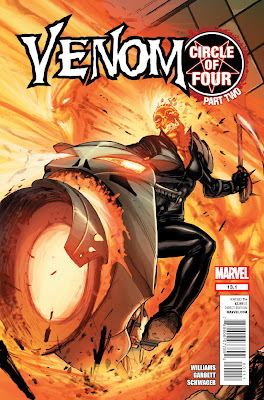 X-23 makes her way back to the top of Blackheart's tower, wondering why her wounds haven't healed yet.  X-666 gleefully informs her that her healing factor doesn't work in Hell. 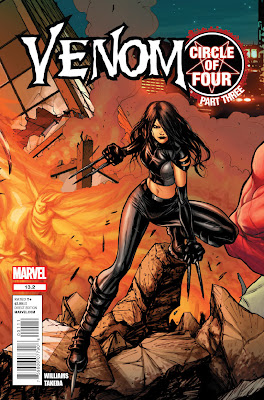 Ghost Rider is able to catch up with Gari Oyle and bring her down, telling Blackheart that she is going to kill her.  Blackheart orders the other antitheses to drop what they're doing and stop Ghost Rider.  Venom and Red Hulk take advantage of their antitheses' departure and regroup.  As X-666 leaves, X-23 makes her way to the top of the tower, only to get attacked by her symbiote clones.

Ghost Rider is stopped from killing Gari Oyle by the other antitheses who ask Ghost Rider to join them.  Before she can respond Venom and Hulk join the fray.  Things quickly turn bad, as the Evangelist is able to blow a hole through Hulk's chest, killing him.  Encephalon does something similar to Ghost Rider, who is now slowly dying.  Venom orders Ghost Rider to continue following Gari Oyle while he holds off the antitheses.
X-23 manages to defeat her symbiote clones and come face to face with Blackheart.  Blackheart is able to distract X-23 long enough to activate a trap door beneath her feet plunging her into lava, killing her.

Venom is able to kill the Evangelist, but then gets his neck snapped by Gari Oyle.  As the dying Ghost Rider makes her way towards the amulet she decides to accept Blackheart's deal, and with her last act destroys it.

Circle of Four has been a hell of ride thus far (see what I did there?).  Rick Remender and Rob Williams have crafted a fun, wild, high stakes adventure in these opening chapters, and have left us with a strong cliffhanger with the deaths of all four protagonists.  How exactly their souls will return to Earth should make for an interesting read.

I really enjoy the way Rob Williams is able to balance darkness with humour; he is able to walk the fine line of acknowledging the ridiculousness of what's going on in the story without having it turn into a parody.  He is also able to deliver some great character moments, like when Flash is finally able to take down his antithesis and when Ghost Rider destroys the amulet.  It's a shame Marvel is cancelling both Ghost Rider and X-23.  Hopefully Marvel has more work lined up for him.

Another strong aspect to Circle of Four is the artwork.  So far we've had Tony Moore, Lee Garbett and Sana Takeda on art duties, and there's not a weak link in that chain.  Seeing all these artists on Venom is a real treat.  While each artist has a different style, the change between issues is never jarring, so those who like consistency should be satisfied. 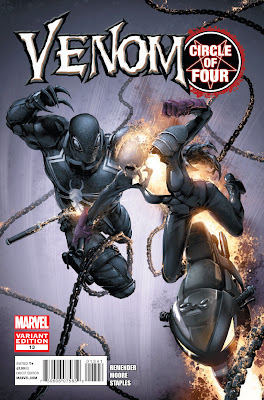 My only gripe is that this feels like a Ghost Rider story guest starring Venom in Venom's own title.  Throughout #13.1 and #13.2 we are constantly reminded about something Ghost Rider did in Nicaragua which is the basis for the deal that Blackheart is offering her.  Since I don't read Ghost Rider, it would have been nice to get a solid explanation as to what exactly happened.  It must have been bad if the Rider were willing to sacrifice Hell on Earth to atone for it.

If the second half of Circle of Four is as good as the first, we can chalk this up as another successful mini event to come out of the Spider-Office!