If the illusion of change has been shattered for some readers after One More Day, there are still moral questions about what this means about Marvel's implied contract with less savvy readers. Are the writers committing a lie of omission, teasing possibilities which will never be consummated? What is the ethical way to hint at future storylines?

Mary Jane's appeared in Family Guy, and other outside media, so you could certainly make the argument that the public sees her as Spider-Man's chief romantic interest. And this results in two contradictory arguments, and a Catch-22 for Marvel.

If anything occurs in Amazing Spider-Man to suggest a potential reconciliation with Mary Jane to the readers combing the book for clues, some detractors will suggest that Marvel is cynically teasing the fans. On the other hand, if a story insinuates a serious romantic relationship between Peter Parker and anyone else, other readers suggest that the fans are being duped because we all know that Peter will eventually end with Mary Jane. The implicit suggestion is that Marvel's only solution to these two contradictory problems is to undo One More Day, so that the all readers know that Peter Parker has ended up with Mary Jane. That way no one is being misled.

The contrasts in the critiques suggest that savvy readers won't actually know what's inevitable. Mary Jane has the most name recognition now, thanks to the Fox cartoon, the Raimi/ Maguire films, the comic strip and all the comic books in which she is Spider-Man's wife. But things can change the further we get from One More Day. The longer Peter and Mary Jane remain apart in the comics, the less inevitable any permanent reunion will be. It's also going to be an advantage for anyone trying to tell the story of Peter Parker, when there isn't a clear conclusion to the main character's romantic burdens.

A big moment to repudiate any impression that OMD is temporary came when Alex Alonso, Joe Quesada's successor as Marvel EIC, demonstrated that he had no interest in restoring the marriage. The Spider-Man film reboot will feature Gwen Stacy as Peter Parker's romantic interest. Now that the waters are muddied, fans will have less reason to assume that a story isn't worth telling because "everyone knows" that Peter Parker is going to end up with Mary Jane.
A reconciliation is still possible. It's fairly easy for Peter and Mary Jane to fall in love with one another again without any sort of retcon. Editors or reviewers referencing the chance that Peter and Mary Jane would get back together wouldn't be cheating the readers in any way, as it would be something that could actually happen. A cheat would be when they actively try to mislead the readers. 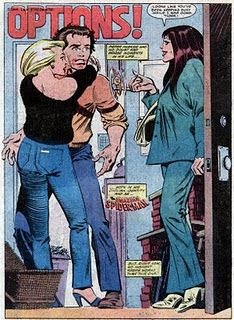 And if the couple were to actually get back together, Marvel wouldn't be teasing the fans, as the thing many of them wanted would actually be happening. It might not be permanent, but that's the nature of the ongoing serial. Some readers would prefer that the two stay together forever, but it's a stretch to suggest that it's cheating for Marvel to feature a status quo which isn't unambiguously permanent.

The status quo is always prone to change, and this includes some of the things many readers like. Should the relationship fall apart (again), there will still be the possibility that the two will get back together, just as that potential existed after the first time Mary Jane rejected Peter’s proposal.

Some believe that any reunion or hint of that will be teasing the fans by suggesting that the status quo of the marriage will be coming back. They seem to believe that these bluffs can result in significant short-term sales bumps. In a CBR post, a former retailer attributed increased sales of Amazing Spider-Man #617 to a then recently-released teaser showing Mary Jane in a wedding gown. Some people take this stuff very seriously, and expect others to do so as well.

In terms of the small picture, and the stories that Marvel will allow the writers to tell, it really doesn't matter if Peter and MJ are married. As noted before, there aren't that many potential stories that actually require Peter and Mary Jane being married, and most stories with the two could be done regardless of their marital status. The readers who want to see more stories with Peter and Mary Jane interacting as a couple in love shuld be happy to see a reunion, and it wouldn't be a mere tease. This wouldn't be enough for some readers, but considering the numerous statements by writers and editors regarding the spider-marriage, it seems unlikely that there would be any attempt on Marvel's end to mislead anyone regarding something so specific.

It's rather unlikely that the writers will try to mislead the customers in an unfair way. In fiction, some form of misdirection is often required so that the readers can be surprised as the story develops. But in the long-term, no one knows exactly how Spider-Man's story will end, or where it will be in the not so near future. Dan Slott recently handed Stephen Wacker a document about his plans for Amazing Spider-Man deep into 2013. But I doubt that they know where the character is going to be in ten years. And that makes it much more difficult to state what is possible and impossible at that time.