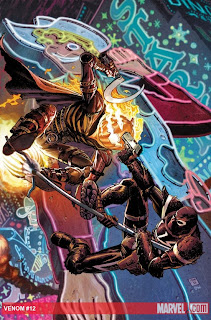 Since we're a little behind on the Venom reviews, I figured I'd give Adam a hand, ( he's taken over Venom for the time being) and lessen his load a little. So far, the Venom series has had a pretty decent story line. You can read our previous reviews to find out what has been going on. To sum it up though, the Crime Master has threatened to hurt Flash's loved ones if he refuses to help him do a job.

The Story.
Basically, this issue begins with Flash acting as a drunk to get behind the security doors of a club in Vegas. Flash can sense that the symbiote doesn't like whats coming. Once behind the security doors, Flash can no longer control Venom, who's going into rage mode. Venom almost takes full control, trashes all the security guards, and proceeds to kill Toxin, who is apparently being kept there in a tube ( no host). There is no real explanation as to how Toxin got separated from Patrick ( his last known host) 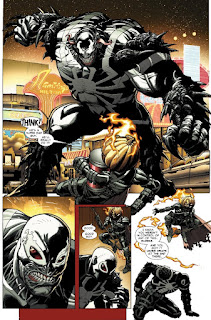 Anyway, Jack O'Lantern shows up, and stops Venom, taking the toxin symbiote with him. Obviously, this does not go too well with Venom. Jack soon finds himself in a very dangerous position with almost no chance of survival. His only chance is to somehow get through to Flash to take control of Venom. Jack warns Flash that the Crime Master will hurt Betty and the rest of Flash's loved ones if anything happens to him.

Flash eventually regains control and lets Jack-O go. He later calls Betty, and breaks up with her, giving some poor excuse. It came across to me that he was breaking up with her to keep her safe ( one of the things that comes with wearing a mask )

The story ends with Flash, sitting with a homeless guy drinking from what looks like a bottle of Jack Daniels. Well, technically, Flash's story ends there. The real story ends with the Red Hulk closing in on Venom, ready to put him back in line.

Thoughts
We're finally getting to see what lots of fans have been waiting for - Flash losing control of the symbiote. Flash has had the symbiote on him for some time now, ever since he stole it from Project Rebirth. More and more we see Flash's hatred manifested in his thoughts. His hate also seems to be feeding Venom a whole lot, as we can see how big Venom gets when fighting Jack-O.

The highlight of this issue for me was the reappearance of Toxin, my favorite symbiote, even though he's just slime at the moment. Whatever plans Crime Master has for Toxin, I'm sure its big. Toxin's first host was a good cop, who at the time was trying to teach his symbiote some good morals. I'd love to see what has become of the symbiote. 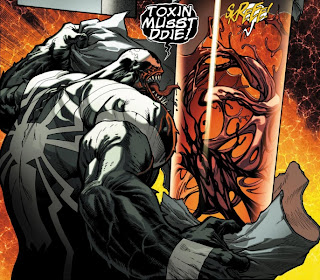 From here, it looks like things are definitely going downhill for Flash. I haven't read Venom 13 or 13.1, ( not even a review) but I'm guessing Rulk eventually appears and fixes him up?

Look out for Adams review for the rest of Venom! Cheers.
Read More