If you thought the Carnage mini-series last year was good, you have to read Carnage U.S.A! We are already into the third issue, and I have to say that I am glad as hell that I read this.

Carnage # 1
This issue focuses on the return of Carnage/ Cletus Cassady. The issue starts with the daily lives of the people of a little town- Doverton. In a Meat Packing Plant, we see a worker horrified as the blood from the slaughter starts talking to him. Carnage eventually makes an appearance, stating that he'll take everything from here.

The scene shifts back four days ago when the town sheriff rushes home to his wife and kids, warning them to stay away from the sink holes. He arrives home too late, just in time to witness the carnage symbiote appear from the bathtub taking over his son's body.

At the Avenger's tower, word has gotten around that Carnage is back. By the time the Avengers arrive, Carnage has taken control of everyone living there. The citizens are still conscious of what is taking place, as we see a lady begging the Avengers to protect her baby. Their bodies however, are fully under Cletus' command. Without much effort however, Carnage soon takes over the bodies of all the Avengers except for Spider-Man.

Back at the US Emergency Response Center, a contingency plan is being made seeing that the Avengers signal was cut. We see, that among their options are - Venom, Toxin, Hybrid, Scorn and Anti-Venom. 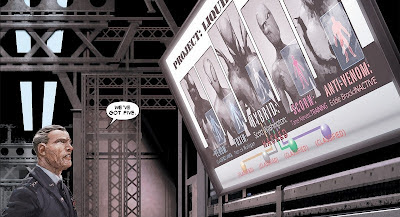 
This issue starts with Spider-Man fighting his fellow Avengers, all who are being controlled by Carnage. 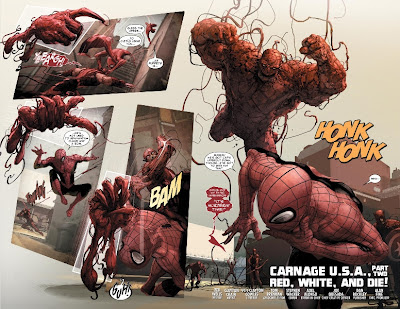 In another scene, we see Contingency plan A - Scorn. For those who do not know, Scorn is a new character who was born in the Carnage # 5. There is some debate as to whether Scorn is ready for battle as she is still new and requires training. Scorn is a hybrid between symbiote and machine, allowing her to bond with technology. 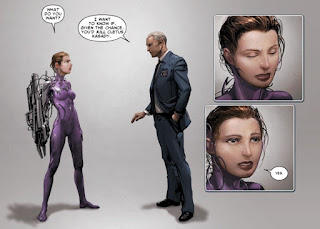 Next we see Contingency B- the Mercury team. The mercury team are comprised of the four symbiotes (now separated) who once formed Hybrid ( another symbiote thing who bonded with a guy called Scott Washington, from some old stories).  Essentially, the Mercury Team is a group of four special forces guys who are in full control of their symbiotes. 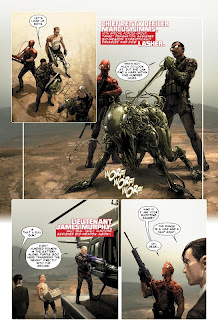 Coming back to Spider-Man, we see that Spider-Man had escaped the fight and joined with a few survivors who made a base outside of Doverton. Among them is the sheriff of Doverton- same one who tried to stop his family from being infected in the first issue. By the end of this issue, Cletus makes a deal with the sheriff's wife. He wants her to kill her husband in order for her kids to be safe with her. She agrees and transforms into her symbiote form. 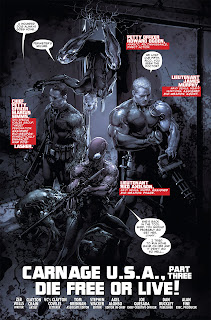 At the start of this issue, back up has arrived. The Mercury Team and Scorn make an entrance at the Ralsby Meat Packing Plant - where it all began and send Doppelganger ( yes, he is here too ), who was eating some meat, running away.

The scene changes to Cletus, who is having fun playing pastor at a church, forcing the congregation to pull their own teeth out with pliers. Cletus also proudly tells Capt America, who is visibly trying to resist, that there is no love, boasting how he got the sheriffs wife to kill her husband.

At the safe-house, outside Doverton, where Spider-Man is, the sheriff ( Eric) sees his wife and kids outside the gates. He goes to them, only to be attacked by his wife, who is crying as she turns into her symbiote form. She explains to him that she has to kill him for her to keep the kids. Spider-Man intervenes, but is then attacked by the kids, also in symbiote form. The sheriff then tells his wife to go ahead and kill him.

Carnage, who can tell what is going on, is enraged and leaves the sheriff alive. He takes control of the wife and kids, sending them back to him. He also tells the sheriff that he will eat his kids when they get back.

The Mercury team later realize that the civilians are bulletproof, which comes as good news to their heavy gunner, as long as the symbiote in on them. 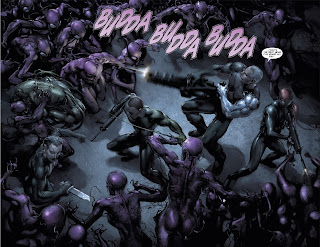 Finally, we see Cletus forcing Captain America to kill the Sheriff's kids. Capt America resists and manages to break free for a split second and calls for a drop down for code name 4563. 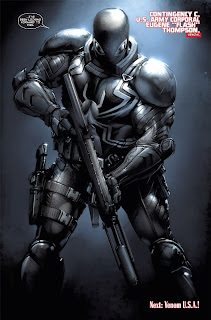 Thoughts
These three issues have been absolutely fantastic. It's always good to have all the symbiotes having a showdown with one another. Any symbiote fan would absolutely love this mini. I do have a feeling that the Mercury team is going to lose control of their symbiotes though. It is hinted in the third issue, when one of the team members fires on a civillian unintentionally. For all we know, we may somehow get Hybrid back as well!

So far, we have yet to see Scorn in action. She will probably have the last fight with Cletus and lose. At the end of the day, this is Spider-Man's battle. The Avenger's never stood a chance walking into a Carnage town, and neither do most of these other contingency plan guys. ( Except for Venom maybe)

Flash Thompson hasn't faced carnage yet. Unlike Eddie Brock, Flash doesn't know what Carnage is like. As such, this battle could be pretty fatal for him as well.
Read More
Newer Posts Older Posts Home