This issue, in my opinion was both good and bad. It was bad in a sense that, by the end of the issue, the reader ( or myself at least ) is left feeling that absolutely nothing of importance happened in the last two issues. I'll keep the good for after the review.

The Story- I Killed Tomorrow part 2
This story starts exactly where Amazing Spider-Man 678 ends. It starts with Spider-Man preparing for the worst. To his surprise however, the time passes 3.10pm and nothing has happened. He then realizes that the time on the watch must have been 3.10am. With a bonus 12 hours to go, he continued to see what he can do to stop the disaster. 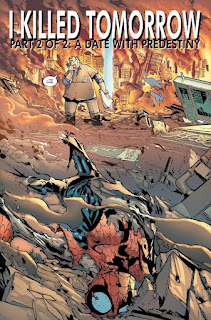 Back at Horizon, Grady is getting tired of the stress and refuses to help Spider-Man anymore. He plans to simply walk into his door, expecting it to return to how it was when he first stepped in earlier that day. When he steps through however, he sees a dead Spider-Man. With that in mind, he goes back to current time, and decides Spider-Man really does need his help.

Spider-Man goes on to do whatever there is to do in the city. Among the things he does is kiss Silver Sable! Well, more like she kissed him after he defused a nuclear bomb they found. Strangely enough, despite defusing the bomb, the future in the door remains a disaster.

Spider-Man continues to do his best to stop the grim future late into the night. Pretty late into the night, Peter gets a call from MJ asking him out to dinner. At first, he refuses, as he's trying to save the world. He then realizes that this may be the end of the world, so he might as well have a last dinner with MJ. ( smart move)

During dinner, the two chat, and MJ reassures him that everything will be alright tomorrow because she believes in Peter Parker to figure it out - not just Spider-Man. 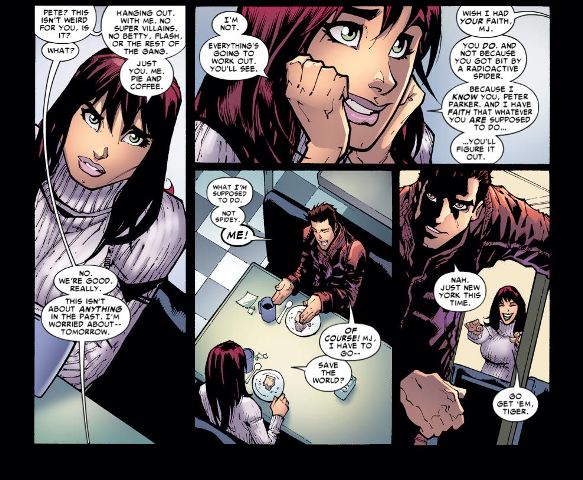 At that point, Peter figures out the problem. He rushes off to Horizon as Peter ( not Spider-Man) and explains to Grady that he had forgotten to do something that day - check the math for Grady's project. When Peter walked through the door, he was absent for a day, thus leaving no one to check Grady's math.

Peter gets to Horizon and tells Grady to shut down his doorway 10 seconds before 3.10am. Grady does as he is told and the future is saved!

The issue ends with Max Model, having his newspaper stolen by a Grady from yesterday while he was not looking.

Thoughts
Like I said at the start, by the end of this issue, the reader is left feeling like nothing of importance ever happened in the last two issues. There were no bad guys at all, just a disaster that Peter caused for himself by not doing what he was supposed to do.

The good part about this issue is that we get to see some of Peter's working relationships. Bringing Grady into the story was a really good idea as it amplifies the character. In the future, we might very well be seeing a little more of Grady, possible as Spider-Man's little helper.

Obviously, my favorite part was Mary Jane reappearing after Spider-Island. Once again, the focus here is that MJ has faith in Peter Parker, not Spider-Man, just like in Spider-Island. (They're definitely trying to go somewhere with this.) What was really great was to see Peter making time to go for a meal with her, just before the end of the world. I mean, wouldn't you want to spend the last few minutes of the end of the world with a friend?
Read More
Newer Posts Older Posts Home