Once again, my favorite artist - Ramos, adds 10 points to story with his art alone! It's a little unfair to comment on the story as I've already read part 2 to this story. ( Sorry for the late review by the way.) I'll just jump right to it.

The Story
It starts with Peter Parker, waking up one morning, most likely after the Daredevil adventure, getting ready for work at Horizons. At work, he was supposed to buddy up with his colleague - Grady Scraps, to check each others math where their new inventions were concerned.

Grady shows Peter his invention - a door that can take you to 'tomorrow.' Grady goes in and snatches tomorrow's newspaper and comes out. Fairly impressed, Peter tries the same, except he walks into a destroyed Manhattan. In the rubble, Peter finds a watch that stopped working at ten after three, thus implying that the catastrophe that caused this damage happened at that time. 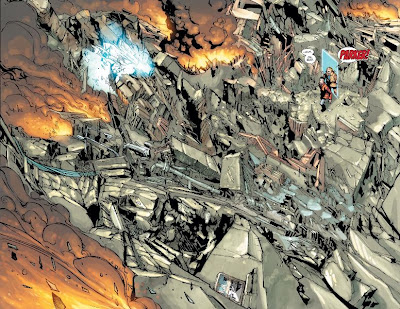 Grady explains that the future on the other side of the door portrays what would take place is the person who stepped through went missing for a day. With that in mind, Peter tells Grady that the future must have been destroyed because he failed to warn Spider-Man. He then tells Grady to read up on everything that Spider-Man did in the newspaper he brought back from the 'Good tomorrow,' while he goes to 'tell' Spider-Man.

Peter's first step is to find the FF and the Avengers and ask for their help. Madam Web, however, intervenes and tells him he must do this himself. With Grady's help, Spidey does everything he 'did' in the newspapers. Unfortunately, the future in the door is still grim.

Thoughts
Up to this point, the story seems pretty good. Most would probably wonder how Spider-Man is going to get out of this sticky situation. The real moral of the story here is - do not meddle with the future. Honestly, you'd think there were enough movies out there to teach a person that by now.

My favorite scene in the issue however was of Peter Parker, taking a stroll to work in the city, meeting and helping others like a normal person instead of swinging off to work. Really great idea to fit that in. 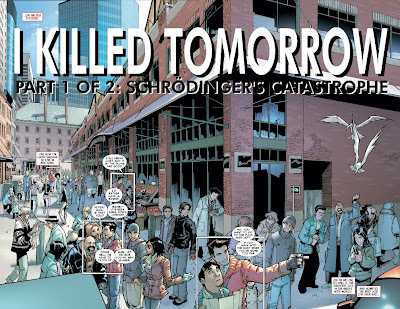