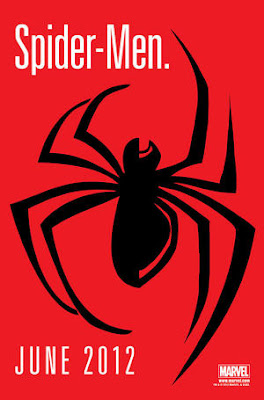 Marvel announced a teaser today for a project called Spider-Men. The initial logo was of a strange spider; half of it is the emblem for Peter Parker and half of it is the emblem for Miles Morales. It seems to suggest a story involving Miles Morales and Peter Parker, an idea reinforced by a cover for the project posted online. But there are at least two radically different ways to do that story.

The most likely possibility is that the Ultimate Peter Parker is coming back. But it can also be the first crossover between the Ultimate Universe and the Classic Marvel Universe.

Marvel hasn't done a crossover in the eleven years since Ultimate Spider-Man #1, although they hinted at the possibility at the beginning of Mark Millar and Greg Land's Ultimate Fantastic Four run. That was a swerve which led to the introduction of the Marvel Zombies world. Though the Marvel Zombies interacted with Black Panther, so there's at least some precedent for one of the Spider-Man to travel into the world of the other. There was also the recent Shattered Dimensions video game, featuring the Marvel Universe Spider-Man, the Ultimate Peter Parker, the Noir Peter Parker and Spider-Man 2099.

A common complaint about the crossover is that Marvel promised they wouldn't ever tell that story. A quote that's referenced a few times in online discussions today is Quesada's alleged comment that the day Marvel does a crossover between the two universes is the day they run out of ideas. To be fair to Quesada, I haven't been able to google the exact quote, although I do vaguely remember hearing something like that.

If he said, that's not a reason to reject a story that could be exciting. When the idea of an X-Over was first broached, it was during a time when the Ultimate Spider-Man was Peter Parker, and a team-up would feature a teen meeting an alternate version of himself as a slightly older guy. But the dynamic has changed significantly, and I wouldn't mind seeing a crossover between the 616 Peter Parker and the Ultimate Miles Morales. It would be an interesting for to have Peter go to a world in which he's essentially Joan of Arc, a young martyr who inspired millions. And for Miles, it would fascinating to see the guy his role model would have grown up to become.

As Bendis is one of the architects of the Avengers VS X-Men, an event which is supposed to change the Marvel Universe, Ultimate Spider-Men might be some sort of tie-in to that. Though I admit that the likelier possibility is that the Ultimate Peter Parker is coming back from the dead, as has been the case with Johnny Storm, Steve Rogers, the Winter Soldier, Bruce Wayne and other superheroes who were killed off in high-profile storylines.

Bringing back a teenage Peter Parker to a world in which he's a celebrity would generate some story ideas, but it seems like something that would be exhausted rather quickly. And it might kneecap his best-selling replacement, as the character's not as important in a world with Peter Parker.  It would show that the Ultimate Universe isn't that different from the Classic Marvel Universe. But a team-up between the Classic Peter Parker and Miles Morales could highlight what's made both characters and world unique.
Read More
Newer Posts Older Posts Home