Daredevil!, The Man without Fear, and one of my favorite characters. In the last issue of Spider-Man, Spidey went to DD to get help, as he was convinced that the Black Cat was innocent of stealing the holographic cell phone.

At the start of the issue, we see that Matt Murdock's partner - Nelson, taking some care of some case where Matt's father was buried.

This issue starts right where the last left off - Spider-Man being electrocuted by the Black Cat. DD gets out of the rubble and stops her. She does mention that she had no intention to kill him, but rather hurt him badly. She is under the impression that Spider-Man turned her in because she would not sleep with him. (Typical). She does seem to fancy the new masked vigilante though - DD. 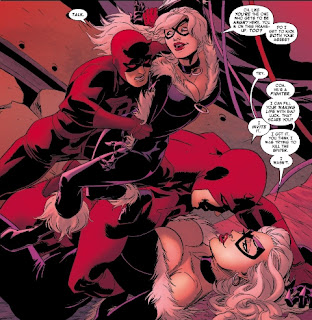 Once Spider-Man is back on his feet though, he explains that they were both set up. The three head towards the home of Wasserschmidt - the inventor of the stolen device. Wasserschmidt, scared to death explains how he had faked the robbery, and had actually stolen it himself, so that he could sell it for more on the black market.

As they speak, DD smells a drug in Wasserschmidt's sweat. He concludes that the man has 10 minutes to live. With that Spidey rushes him to the hospital, while DD and Cat go to retrieve the holographic device.

DD and Cat spilt up and DD eventually finds it. Unfortunately, he still seems dissatisfied as he didn't find out who framed Spider-Man and the Black Cat. Cat, distracts DD by kissing him and making out on the roof. This eventaully leads to DD's bedroom where they do some funny things ;) They are interrupted however by Nelson, who tell's DD that his dad's body is missing.

Unknown to DD, Black Cat met the culprit who framed her while she had split up from him. Apparently, she was framed, so that she would 're-steal' the device, giving the crook a chance to speak with her in private. Cat is offered a new job - the custody of Matt Murdock, to which she would get a handsome reward.

Thoughts
Fairly okay issue. Being a Daredevil book, the focus is obviously more on DD. Spider-Man plays a rather tiny role in the story. As far as the Black Cat is concerned, the panels are drawn in such a way that the reader automatically assumes Felicia has accepted the offer - thus seducing DD, as the first step in her new job. Somehow, I'm not so sure she has actually accepted the offer though, as we all know that Felicia is a playful girl. She may very well be seducing DD for the hell of it, and may very well turn things around.
Read More
Newer Posts Older Posts Home