A common complaint regarding One More Day, or any way Marvel could have come up with to end Spider-Man's marriage, is that as a result of the transparent nature of that retcon, many fans will have a greater awareness about which stories can’t be done. One serious problem with the illusion of change approach is that once readers become aware of it, the illusion shatters. They'll understand why some things can happen (IE‑ break ups, Peter getting fired) and some things won’t (marriage, kids). But I think that this was going to happen anyway.

The cover on the right is an example of this. I suspect most readers were pretty sure that Spider-Man was not going to die in that issue. And they had good reason to be cynical about any future "deaths" for Doc Ock.

It has to be said that the readers who analyze comics (and develop an understanding of the various motivations for the creative teams) do lose their ignorance about things that can and can’t happen, which will affect their enjoyment of stories. That occurs whenever you develop an understanding of storytelling structure and production in any medium. Once you realize that a Spider‑Man in danger cliffhanger is never going to end with his death, you've got to learn to appreciate the stories in a different way, or move on to books which aren't so editorially driven.

Because of what happened in One More Day, some readers will come to certain conclusions about ongoing storylines. They would say that it's obvious that every relationship Peter has is doomed to fail, though I'm not sure that's true (more on this point, later). At the same time, such readers were already aware that writers were limited in how they could depict the marriage. It wasn’t going to change in any significant way without a retcon, due to the various reasons the writers couldn't kill MJ, give her and Peter children or have them divorce.

The only readers who "know" that all of Peter Parker's relationships are destined to fail are those knowledgeable about the behind the scenes politics at Marvel. When that happens and becomes an insurmountable problem, you have to move on to comics that won't be affected by your knowledge of the creators and editors. If you stop speculating on what’s going to happen next on the internet and learn to ignore solicitations and previews, this will be less of a concern, as you become less familiar with the inner workings of the industry.

If you choose to read interviews with writers, and become aware of the economic reasons for storytelling decisions, you have to learn to appreciate the Marvel Universe comics on a different level than before. The alternative is to leave the books and characters for the next generation of the readers and move exclusively to series that don’t have these restrictions. It's not something you're going to find in the main Spider-Man title.

Unfortunately, once you become aware of how those stories are constructed, you’ll have the same problem with many other series. I don't see any viable alternative, and consider this to be the cost of becoming knowledgeable regarding the mechanics of any storytelling industry. Such compromises have to be made, as the companies can not cater to the minority of readers who understand that the Batman can’t kill the Joker, not because of any moral code, but because the villain has to be kept alive for later arcs.

As comic book readers, we have tremendous access to the professionals, and to information about storytelling decisions. I enjoy reading scripts, or following Dan Slott's formspring. But access to information means that I'm less likely to be surprised, and more likely to consider the various meta reasons for something. If you don't want to do this, you don't have to. There's no reason to check out previews, read interviews, or participate in message board discussions about why certain storytelling decisions were made. You don't have to keep going to the sausage factory.

Granted, you should still be able to enjoy a well‑written battle between Spider‑Man and the Vulture, even if you know Spider‑Man's not going to die. Though this brings up the question of what exactly readers "know."

With his origin out of the way, Miles embarks on his first adventure as Spider-Man! 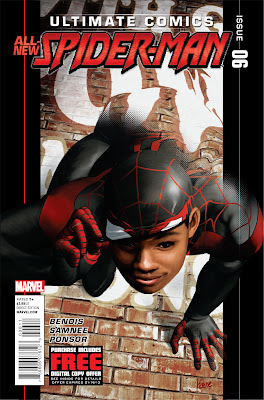 Uncle Aaron (A.K.A. the Prowler) arrives at a shady bar in Mexico City to deliver a package he stole from Oscorp to his client, a criminal who calls himself the Scorpion (a big guy with a scorpion tattoo).  Scorpion's men ambush Aaron, but Aaron is able to knock them out using an electrical device he got from the Tinkerer.  Aaron is then confronted by the Scorpion.

Meanwhile, Miles is patrolling the city as Spider-Man when he stumbles across a purse snatching.  Miles sloppily takes out the thugs before he is chased off by the police.  Former Daily Bugle reporter Betty Brant captures the whole thing on camera. 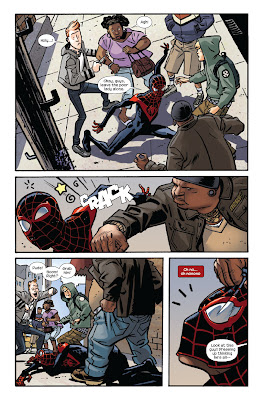 The Scorpion initially holds off on paying Aaron, but relents when Aaron threatens to kill one of his loved ones right in front of him.  After paying Aaron the Scorpion asks for his package, but Aaron refuses to give it to him and attempts to stab Scorpion with a knife.  The knife fails to penetrate Scorpion's rock hard skin, so Aaron next tries to electrocute him, also to no avail.  Running out of options, Aaron kicks Scorpion where the sun don't shine and runs outside, where the police are waiting for him.  With his device out of power, Aaron is arrested.

Miles returns home where his mom is waiting for him.  The two start to talk about the conversation Miles had with his father about Uncle Aaron when Ganke bursts in and interrupts them, claiming he has something urgent to tell Miles.  In Miles' room, Ganke tells Miles he needs training, and gives Miles some footage of Peter Parker fighting Doctor Octopus to study.

In his cell, Aaron sees a picture in the paper of the new Spider-Man and demands to know if he's someone new (he can't read Spanish).

This was a great start to Miles' second arc, with Brian Michael Bendis following up on the most interesting subplot introduced in the previous arc; Uncle Aaron.  Although the first arc suggested that Aaron, despite being a career criminal, might not be such a bad guy, his actions this issue clearly establish him as, in the words of Miles' mom, "a bad person."  Going by the last page, it looks like Aaron has put two and two together and at least suspects that Miles is the new Spider-Man.  How this will affect their relationship going forward should make for some interesting reading.

Chris Samnee takes over artistic duties from Sara Pichelli this issue.  Although I miss Pichelli, Samnee does a good job filling in, though his different style took me a while to warm up to.

I do have a couple of gripes; for one, the new Ultimate Scorpion was disappointing.  There's no particular reason to call him the Scorpion other than his barely visible tattoo.  Still waiting for Ultimate Mac Gargan (unless that was Gargan, yikes!).  Also, does anybody else find it weird that Nick Fury hasn't offered to train Miles in light of what happened to Peter?

The new Ultimate Spider-Man is still going strong.  Looking forward to the reunion between Miles and his uncle.