With Red Hulk down, it falls to the unlikely duo of Spider-Man and J. Jonah Jameson to save the moloids from certain enslavement!  That's right, a Spidey/JJ team up written by Zeb Wells and illustrated by Joe Madureira.  You should have bought this already, unless you have a paralyzing fear of being entertained.  But I'll review it anyway, bulletproofsponge isn't paying me to not review comics.  Come to think of it, he's not paying me at all... 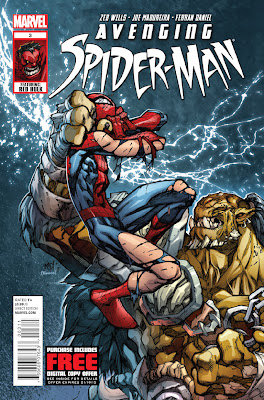 Spider-Man and Jameson manage to escape Rak'tar and the molons by riding what JJ refers to as a "mole-mule."  When they get back to Subterranea, they quickly begin to argue.  JJ wants to go back to the surface but Spider-Man wants to stay, not wanting to leave Red Hulk and the moloids behind. 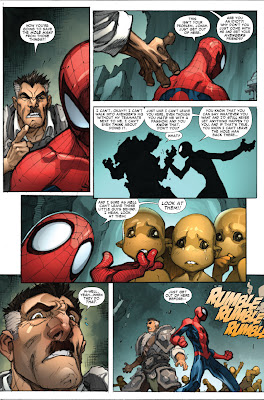 Their argument is cut short when Rak'tar and his molons barge in with intent of slaughtering the moloids.  As JJ heads for the surface, Rak'tar offers Spider-Man the chance to leave but Spidey refuses, challenging Rak'tar to fight.

Needless to say, Spidey gets his butt handed to him.  Just as Rak'tar is about to finish him off, Spider-Man grabs a sharp diamond with his webbing and uses it to slice off Rak'tar's pants.  Turns out molons don't wear underwear.  This shames Rak'tar in front of his molons, which according to molon law means that Spidey won the fight.  Recognizing Spider-Man as their superior, he and the molons are able to work out a peace treaty with the moloids.  When Red Hulk comes to, he's amazed at what's transpired.  Spidey and Rulk travel back to the surface where Spider-Man explains what happened to JJ and the Avengers.

This was a great finish to what has been an amazing first arc.  Both the story and artwork were top notch.  Joe Mad's artwork is bright, loud and fun.  You can feel the energy and enthusiasm leap off each page.  And let me add that it is very refreshing to have an A-list artist deliver consistently great work on time without having to bring in other artists for assistance.  Kudos to Mad and the editors for that!

Avenging Spider-Man isn't just a pleasure to look at; Wells delivered a very funny script that was also able to highlight why Spider-Man is such a great and effective superhero despite not being the strongest or even smartest one around.  In the end, his sense of humour won the day, which is always nice to see.

This first arc of Avenging Spider-Man was a resounding success and I'm eager to see what Wells has up his sleeve next.  Even though the next few issues won't have Mad on art duties, the future for this title looks bright! 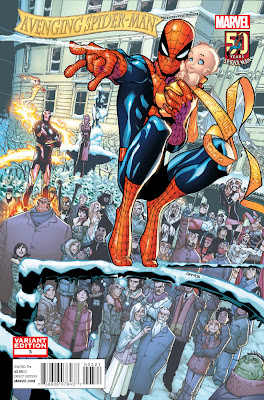 Moon Knight vs. Count Nefaria round 2!  Spoiler alert: this time it doesn't end well for our favourite moon themed superhero... 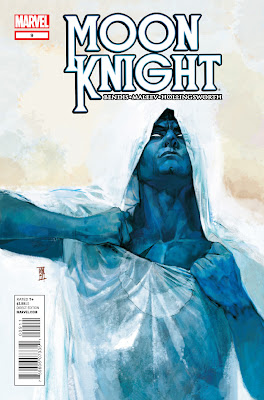 One week ago, Buck Lime created an energy shield for Moon Knight that looks and functions like Captain America's.  Buck also managed to recreate Spider-Man's webshooters (apparently S.H.I.E.L.D. reversed engineered the formula long ago) as well as some metal claws similar to Wolverine's.

In the present, Moon Knight is using all his gadgets to fend off Count Nefaria.  After getting Echo to safety (against her will), Moon Knight attempts to fight Nefaria, first with his Cap personality and then Spider-Man personality deciding his tactics.  Moon Knight is barely holding his own when Echo joins the fight, hurting Nefaria with her vibranium tipped staff.  The fight takes a tragic turn when Nefaria blasts Echo through the chest with his eye beams.  Enraged, Wolverine orders Moon Knight to kill Nefaria, but Cap and Spidey protest.  Wolverine responds by killing both Captain America and Spider-Man, allowing the blood thirsty Moon Knight to fight Nefaria unrestrained.

Damn, this might be the end of the Moon Knight/Echo relationship I've been enjoying so much since the series began.  There's still hope, as being shot through the chest is really just a scratch by comic book standards.  Brian Michael Bendis and Alex Maleev have delivered another solid issue of Moon Knight with this action heavy issue.  I suspect things are going to get a lot worse for Marc Spector before they get better.