The story
We start off with Peter, moaning over his break up with his girlfriend - Carlie. As he walks around the city, he notices couples everywhere. Wanting to release some stress, he changes into Spider-Man and takes it out on a pitiful robber.

Just then, the Black Cat comes by. Spider-Man begins " flirting" with Felicia, hoping to score a lil something that night. Anyway, none of it works out in his favor as she pick up on what he's up to - using her as a rebound.

Felicia then goes back to her apartment, only to find a Spidey tracer on her costume. She is then arrested by Police. The next day, at work, Peter finds out about Felicia's arrest. It appears that she had stolen a hologram projecter device from Horizon Labs, with video footage to prove it.

Peter immediately picks up that something is not right as the Black Cat would never make such a silly mistake. He also finds out that the time of the robbery was the same time that Spider-Man was with her the night before. 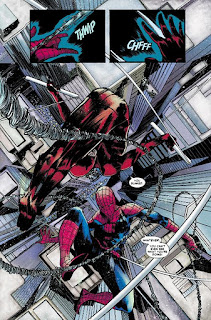 As Spider-Man, Peter goes to see his trusted lawyer friend - Matt Murdock aka Daredevil. DD agrees to help Spider-Man out.  Spider-Man tells DD that there is no point in bailing the Cat out of prison as she is probably out already. (Yes, they do show her breaking free) Instead, the two begin searching for Wasserschmidt, the inventor of the stolen device.

While searching, Spider-Man sees Wasserschmidt being held hostage by several armed guards. Spider-Man tells the guards that they will back off. DD however seems confused as to why Spider-Man is behaving so timidly.

As far as DD's sonic hearing is concerned, he did not see any hostage. Spider-Man realizes he's been fooled by the holographic device. The two take chase, only to find themselves in a booby trap in which the walls around them come falling down.

Spider-Man digs his way out, cursing about his bad luck as he grabs an electrical wire. When he's finally able to see light, he sees a very pissed Black Cat standing over him.

Thoughts
It's always great to see Spider-Man teaming up with other characters of the Marvel U in his own book. This issue really emphasizes the greatness of Daredevil, who truly lives to his name as portrayed even in this book as the two freefall down a building, beyond even Spider-Man's comfort zone.

I'm also eternally grateful that Felicia didn't fall for Spider-Man's pathetic pick up lines. In this issue, we see that Felicia is not just some slut with bad luck powers. She actually has class and, as we can see, not easily kept in prison. Felicia is bound to be really pissed with Spider-Man ( since she thinks he placed the tracer on her suit to tip off the cops) To make matters worst, she was actually hoping to get a place on the Avengers at one time. Being arrested was definitely not on her to-do list.

This story continues in Daredevil # 8, which I suppose will be reviewed here.