Hey folks!  Sadly, Combustible Pumpkins couldn't be here today, as he was injured last week in a tragic bull fighting accident.  As he recovers, you'll have to make due with my review of Venom #11. 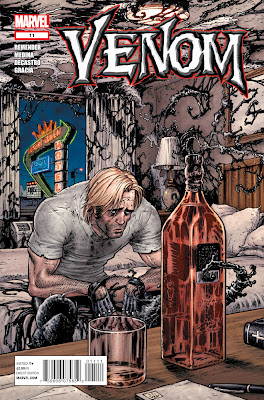 Eddie Brock sits in an undisclosed location preparing his weapons for his new career as a symbiote hunter.  He vows to take down Carnage, Toxin and Venom.

Meanwhile, after making a call to his girlfriend Betty Brant, Flash Thompson heads back to his apartment where he finds Jack-O-Lantern waiting for him.  Jack informs Flash that he's going to be accompanying him on his mission, much to Flash's chagrin. 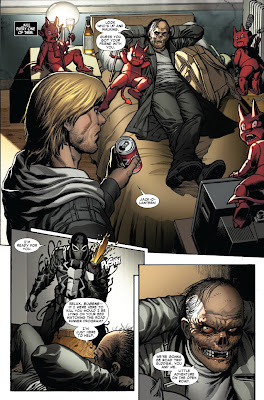 As Flash and Jack drive towards Las Vegas the radio mentions that there was a mine cave-in close by, so Flash drives over to help.  Venom and Jack help most of the miners escape safely, but one of them refuses to leave his injured friend behind, so Jack shoots the injured miner.

Flash and Jack stop next at a diner, where Jack tells Flash his grisly origin story about how he was raised by the Crime-Master.  Flash and Jack then leave, but not before Jack sneaks off to murder the waitress and the cook.

Rick Remender sets up Jack-O-Lantern here as a character you love to hate.  Every word that comes out of the character's mouth makes the reader wish Flash would just "Venom out" and kick his ass.

However, this didn't make the issue much fun to read.  I love dark comics as much as the next guy, but Remender piles it on a little too thick here.  Counting the flashbacks, Jack-O-Lantern commits so many pointless atrocities that by the last page I was relieved it was over.  And there really isn't much to the Jack-O-Lantern character beyond the unique way he likes to murder people, though that still makes him the most memorable version of the character so far.

While this wasn't my favourite issue of the series, Remender sets up several plot lines that will likely continue to make Venom a must-buy series.  Red Hulk's assignment will lead into the upcoming Venom event in February, and I'm looking forward to seeing what role Eddie Brock will play in the series going forward.  Flash continues to lose more of his soul as the series goes on and ironically it's not because of the symbiote, but his own choices.
Read More
Newer Posts Older Posts Home