Featuring the long awaited return of Batroc the Leaper!  Oh, and Venom too... 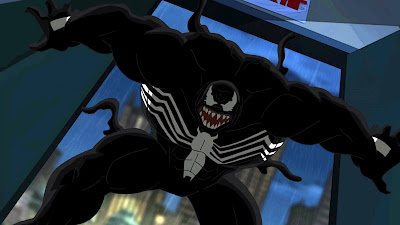 After pulling off a robbery, Batroc the Leaper is ambushed and severely beaten by Venom in a dark alleyway.

The next morning, Peter Parker finds his Aunt May watching a television broadcast accusing Spider-Man of severely beating an "innocent man" (Batroc).  Worried that Venom might be back, Peter confronts Harry Osborn at school, but Harry denies that he's become Venom again and asks Peter to drop it.

Not convinced, Peter follows Harry home from school as Spider-Man (riding the "shudder" spidercycle).  Harry arrives at Oscorp intent on telling his father about Venom, but Norman cuts him off before he can confess.  Angered, Harry transforms into Venom right in front him.  Spider-Man crashes through the window and keeps Venom from the stunned Norman, who for the first time is impressed with his son.  Despite Spidey's interference, Venom is able to hit Norman out the window.  Spider-Man rescues Norman and swings back to his office, only to find that Venom has disappeared. 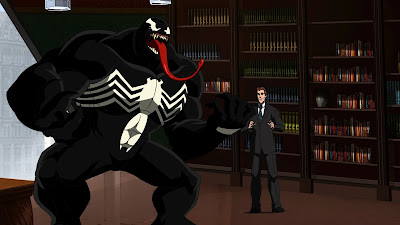 Spider-Man attends a meeting on the Helicarrier with his fellow teammates; White Tiger, Iron Fist, Luke Cage, and Nova.  Nick Fury tells them that Venom needs to be taken down once and for all.  Spidey points out that someone innocent could be inside the suit, prompting Fury to ask him if he knows more than he's letting on.  Spider-Man admits that he knows who Venom is, but refuses to say who, asking that he be allowed to handle the situation on his own.  Fury instead forbids Spider-Man from pursuing Venom.

Of course, Spider-Man has no intention of leaving Harry out to dry, and hangs outside the Oscorp building waiting for him to return.  Spider-Man eventually spots Venom and intercepts him.  Meanwhile, the team is informed of Venom's reappearance and uses the escape tunnels inside the school to change into costume.  However, the group gets caught in a trap laid by Spider-Man, getting tangled up in webbing before they can reach the end of the tunnel.

Spider-Man's fight with Venom takes them into an Oscorp lab where Norman just happens to be giving a tour.  Norman tries to get through to his son but is struck aside.  Spider-Man then attempts to get through to Harry, but is interupted when his team crashes through the ceiling and continues the fight.  Venom is eventually able to escape, but not before White Tiger obtains a sample of the symbiote.  Angered, Norman orders them all to leave Oscorp. 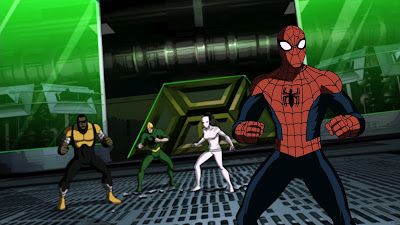 That night, the team convenes at Midtown High and ask Spider-Man to come clean about Venom.  Spider-Man tells them that Harry is the one behind the suit, and the team promises not to tell Fury.  Everyone agrees to let Spider-Man use the symbiote sample White Tiger collected to make an antivenom compound while the rest of the team attempts to find Venom.  Venom proves easy to find, arriving at the school to collect the sample Tiger took off him.  Spider-Man is able to complete the antivenom and manages to inject Venom with it, returning Harry to normal.

Later, Norman visits his son in the hospital and promises to use all his resources to help him.  He then takes a sample of his son's blood and brings it to Doctor Octopus.

The next day, Spider-Man thanks the team for coming through for him.

The Venom Saga has so far been the only plot in Ultimate Spider-Man to span multiple episodes.  Having Harry as Venom has been... different.  It's an interesting new take on the Osborn family dynamic, and gives the show some much needed drama.  It was nice to see the team stick up for Peter here; it makes them more likable then they've been in the past.  I also liked seeing Spidey use his brain to defeat Venom this time around.  The show often portrays Spidey as such a goofball that it's easy to forget that the character is a scientist.

The humour in this episode was tolerable.  As usual, Spider-Man's regular quips and some of the lower key jokes are the best ones, while the over the top stuff tends to fall flat.  The reason the humour in "Freaky" worked so well was because the Bendis-penned plot provided ample opportunity for comedy.  Here, the writers are forced to inject humour into a more serious plot.  As a result, a lot of the jokes feel forced and unorganic.  I'm tempted to think that this show would be a lot better if the considerable creative talent behind it just did a more straight up Spidey 'toon.


"Venomous" was a decent episode that managed to show Spidey finally bond more with his team and advance the ongoing Venom plot.  It'll be fun to see what the writers do with it next...  Carnage perhaps?