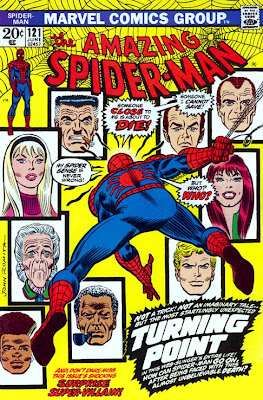 This is probably not a controversial choice, nor an unexpected one. And there's a hell of a reason for that. We've decided that the best Spider-Man story of all time is...

What Happened:  The story begins quickly with Spider-Man coming home from Canada, and finding out that Harry has OD'd on LSD (A light comedic story this ain't). Peter tries to visit Harry, but Norman orders him, Gwen, and MJ out. Meanwhile everything's crumbling around Norman's life, and Peter realizes he has the flu, and Jonah kicks him out when he returns with pictures of the Hulk, in a really funny scene. Norman snaps, and remembers that he's the Green Goblin, while Spider-Man's so sick that he enters his house through the window, even though he knows Gwen's probably inside. What he finds sends him on a desperate search as his spider sense leads him to the Brooklyn Bridge.

Why It's In The Top 50: Mister Mets is awestruck by the quality of the story.

I doubt anyone's surprised by this story's presence on my list, or even appearing as Number 1. It's simply one of the best comic book stories ever, and I think it's slightly unfair that with this one story twenty year old Gerry Conway wrote something better than anything a lot of great writers (Stan Lee, Neil Gaiman, Garth Ennis, Warren Ellis, etc) had ever written in their lifetimes (in my opinion of course.)

This is the Psycho of comic books, in that I don't think there's ever been anything more thrilling in the medium, even if you know how everything's going to end. Spider-Man has his best battles against the Green Goblin in both chapters of this issue, (although they may just be elevated by the quality of the rest of the issue.) There's so many brilliant scenes, like Gwen wondering what's wrong in Harry's life, while the Green Goblin's at the window, and of course, perhaps the most famous death in comic books. And there's still a controversy over what was responsible for the death, all because of a single sound effect that Gerry Conway didn't even realize that he left into the script.

And of course there's still the second issue, which more than maintains the quality of the first. You get to see a traumatized, pissed off Spider-Man getting shot at by a cop, while his partner yells "Shoot to Wound, blast it! Shoot to wound!," a really angry and inhuman looking Peter Parker, ably drawn by Gil Kane, Peter choosing between revenge and helping a friend (he doesn't pick the friend), Spider-Man VS. J. Jonah Jameson, an excellent battle between Spider-Man and the Green Goblin, the best death scene of any villain, the set up to Harry Osborn becoming the second Green Goblin, and the set up to Peter's relationship to Mary Jane.

It's weird just how good this story is. I knew about what happened in it before I read it, but there's so much to appreciate. Even after thirty years, this story has remained timeless by not mentioning outdated science, or other stories (the preceding, and following stories had a subplot with Aunt May living in Doctor Octopus's house, which didn't have the best payoff, but that's mercifully ignored here). I don't know if it's even possible to write a Spider-Man story, although I hope the writers of the future try.

What the pros say: Gerry Conway mentioned the story a few times in an interview about his Spider-Man run in Write Now! #14.


Danny Fingeroth: What are you proudest of that you've done in your Spider-Man runs?

Gerry Conway: Raising the bar for everyone who came after me with the Death of Gwen Stacy.

Danny Fingeroth: If you could meet Spider-Man, what would you like to ask or tell him?

Gerry Conway: Sorry about that.

JR Fettinger argued that it didn't belong in a top ten. Gwen Stacy is considered an example of the "Women in Refrigerators" trope. The death of Gwen Stacy is literally the end of an era, as many consider it the conclusion of the Silver Age. 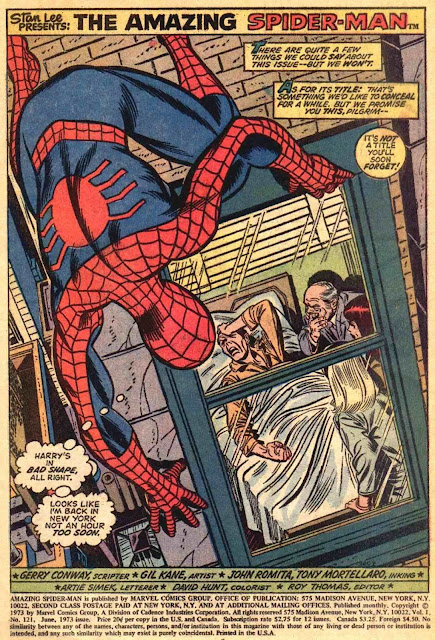 Here's why the first page is so fantastic. A story in which a supporting character will die opens with another supporting character in mortal danger. There's a lot going on, but it's conveyed well. Mary Jane and Gwen are by Harry's bedside. Spider-Man is watching from outside, which symbolizes how the secret identity has separated him from his friends.

It's astounding to think of this from the perspective of a reader who doesn't know anything heading into the story, and has to guess about who's going to die and who the villain's going to be. It's a hell of a start. 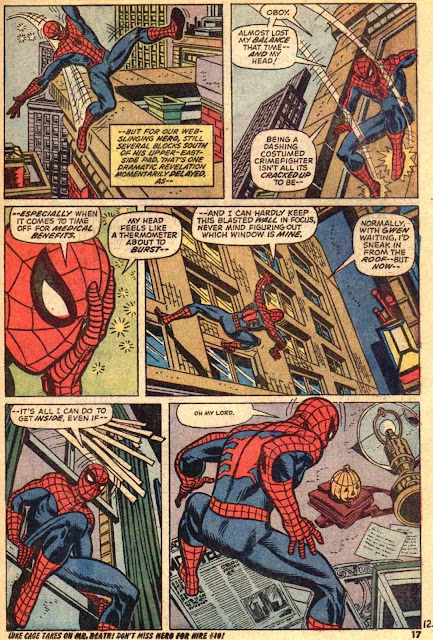 I think this page is fantastic storytelling as a weakened Spidey's expectations are dashed in a horrible way. There's something almost poignant about his recklessness entering from the window, as if everything would have still changed, had Osborn not had his crack-up. 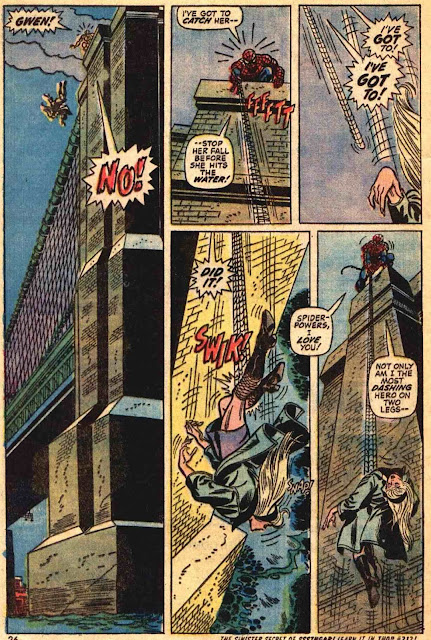 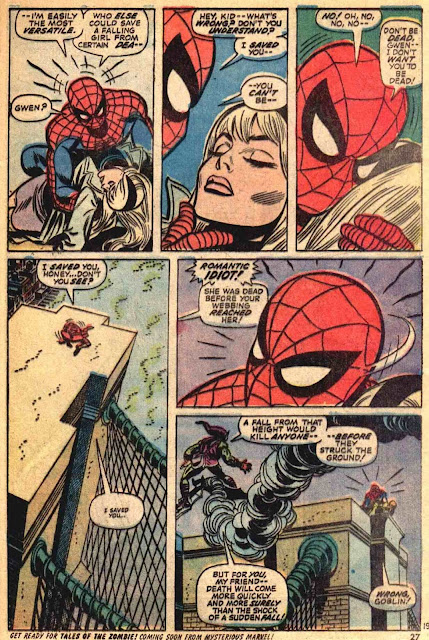 And then there's his slow and horrific discovery that he had failed to save the woman he loved. And the Green Goblin just gloats, further cementing this as one of the nastiest deeds of any comic book supervillain. 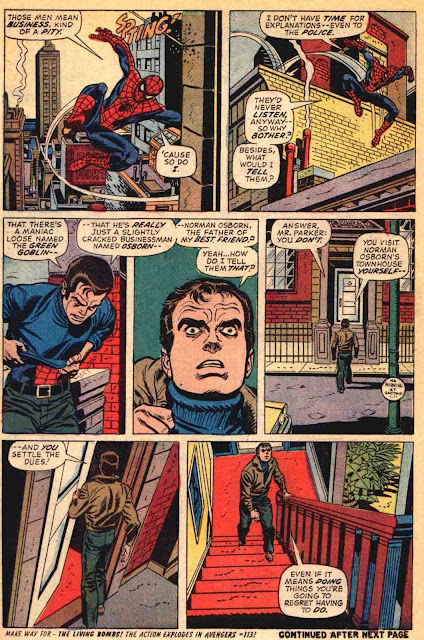 I wanted to single out the crazed look in Peter's eyes in the middle of the page. You could believe that this is a guy whose girlfriend was just murdered. 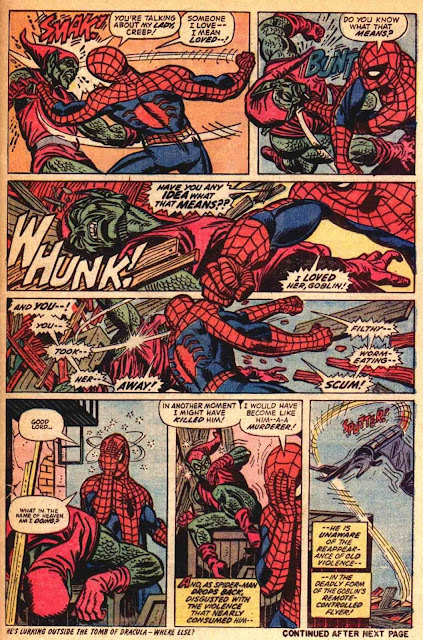 The character was pushed harder than ever before, and you can make the argument that no writer, artist or editor can ever push him this hard again. But it was incredible to see it happen this once. The result was the best Spider-Man story ever.