Best Spider-Man stories # 6: Down Among the Dead Men 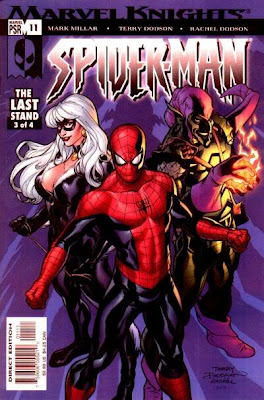 What Happened: After Spider-Man has taken down the Green Goblin, someone new hits him where it hurts. First, Uncle Ben's grave is tampered with. Then, Aunt May is abducted. Spider-Man's investigation pits him against a few Marvel heroes and his greatest enemies. And it all ends with him forced to side with the Green Goblin.

Why It's In The Top 50: Mister Mets thought it was an excellent beginning for a promising satellite title.

Before Civil War, Mark Millar’s first major Marvel Universe project was a twelve issue stint launching Marvel Knights Spider-Man. The purpose of the book was to put excellent writers and artists on Marvel’s flagship character for an year, before the next creative team took over. At the time, Millar believed that the best way to do a great superhero comic book was to compress all your ideas into a limited run, a philosophy he exemplified with thirteen issue stints on Wolverine and Ultimate Fantastic Four. It worked well for Spider-Man.

Millar reconciled the disparate aspects of the character to tell the best story of the real Spider-Man since “Kraven’s Last Hunt.” A singular reason for the character’s appeal is impossible to pinpoint, but Millar combined various disparate elements of great (and even just decent) Spider-Man stories of the past. This is the geek aware he’s married to a woman outside of his league, the reckless superhero from Lee and Romita’s run who picked fights with the Avengers, the nice guy from “The Kid Who Collects Spider-Man” who does a tremendous favor for one of his greatest enemies and the hero from “Nothing Can Stop the Juggernaut” willing to die fighting the bad guys.

The big villains are all here, and they’re generally terrifying. Norman Osborn proves to be a formidable presence while imprisoned, despite his fears that he’ll be killed for his part in a conspiracy which dates back to 1945 and spans the entire Marvel Universe. With this storyline, he is elevated to a criminal mastermind on par with the Kingpin and Lex Luthor. Thanks to a new host, Venom solidifies his position as one of the big three Spider-Man villains, and gets his best fight scenes against the hero, a result of Millar and Dodson’s cinematic sensibilities. The Vulture beats on a hospitalized Spider-Man drugged out of his mind on painkillers, but his reasons for being so angry still make him sympathetic. Electro is at his most vicious, as the cause for Spider-Man’s severe injuries. The central mystery of the series is a compelling one as an old enemy returns, radically different than before, using his knowledge of Spider-Man’s identity, to really piss off the hero, desecrating Uncle Ben’s grave and abducting Aunt May. The resolution to that mystery is perfectly logical and provides the series with a suitable structure. 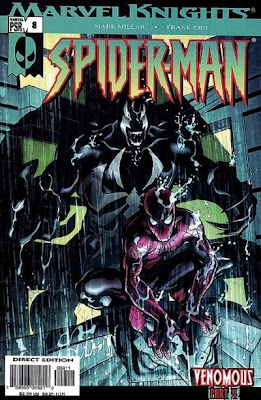 Supporting cast members have some of their strongest moments ever. The J Jonah Jameson versus Spider-Man conflict comes to an appropriate conclusion, with Jonah simultaneously represented as both an opportunistic jerk, and a man who loves his family. Mary Jane provides crucial support for her husband, takes on Spider-Man’s greatest enemy, and brings back the Parker luck by accumulating credit card debt, a stroke of genius reconciling Peter’s “hard luck” image with his marriage.  Black Cat’s similarities, differences, and true feelings regarding the hero are revealed, making this her strongest story, with Dodson drawing the character as well as he did in Kevin Smith’s mini-series The Evil That Men Do. Aunt May had a great moment towards the end when she tried to objectively measure how many lives Spider-Man has saved.

The storyline is an excellent example of a recent development in comics that I have enjoyed: a perfect balance of the script and art portions of comics, as the writers work to tell the best stories they can and give the penciller cool things to draw. This differed from the excesses of the 90s (especially in Image and the books influenced by the Image artists) where the writing and storytelling were secondary to the visuals. It also differed from the rise of the super star writers (Kevin Smith, Bendis, Straczynski) in the last decade, which briefly contributed to witty but visually boring scripts. The development is exemplified in some of the best modern comics (Ultimates 2, All-Star Superman, Infinite Crisis) and it is something I hope becomes the norm.

This would’ve been a career best work for Jim Lee, Todd Mcfarlane, or John Romita Jr, given to the quality of the writing and the impressive visuals Millar provided his artists. Dodson and two-time fill-in artist Frank Cho are usually impressive, but I do regret not seeing an all-time great on this book. Both pencillers do a solid job on the art, balancing intense widescreen battle sequences, quieter private moments, and somber graveyard vigils. Colorists Laura Martin, and Ian Hannon do exceptional work on everything from night-time battles between Spider-Man and the Sinister Twelve, to a restaurant conversation between Peter Parker and his wife.

Mark Millar read his first comic book at the age of six: the second half of “The Night Gwen Stacy Died.” That’s the type of thing that could warp a budding writer and may have encouraged the deliciously twisted portrayal of the Spider-Man villains here, along with some of the darker scenes in his superhero comics (especially the way some of his supervillains don’t hesitate to turn children into casualties). He wanted Gerry Conway to write the introduction to the hardcover collection of the epic, but had to settle for Stan Lee, who aptly described the story as an awesome superhero movie come to life.

Millar contributed to the Spider-Man mythos by providing a sense of the how brutal Spider-Man’s job is, something that has previously been more effectively conveyed by the movies. This contributed to the modern and edgy tone of the series, although the violence was never too  extreme. It featured some fairly obvious ideas that previous writers hadn’t done in the Marvel Universe before, such as doubling the size of the Sinister Six or pitting Doctor Octopus against Norman Osborn (the first and so far only time they’ve met.)

This epic is almost certain to become more notable when it’s adapted into a video game. It’s got a dozen classic Spider-Man villains, many guest stars, two prison break-in levels, and a five-million dollar bounty on Spider-Man, which offers the excuse for an army of civilians, and ordinary thugs to try to stop Spidey. The last level could be a truly awesome smackdown between Spider-Man and the Sinister Twelve, followed by a big boss fight with the third Venom, and a final battle between Spider-Man and his two greatest enemies on top of the Brooklyn Bridge, to save the life of the woman he loves.

The limited aftermath of the story demonstrates some of the problems in comics today including the overabundance of “Events!” which prevent writers from being able to explore the ramifications of other runs. The average writer has twelve issues an year, which often translates into two to four stories, a limited space to tell the tales they’ve often been planning for years. This becomes even more limited when going on detours due to the major “Events” in the Marvel Universe. The focus of the series didn’t last long perhaps because events such as “The Other,” the unmasking and “One More Day” meant there was no appropriate place for writers to do self-contained stories of the Marvel Universe Spider-Man.


What others say: It was #10 on Complex.com's list of the best Spider-Man stories, #25 on IGN's list and #35 on CBR's list. JR Fettinger disparangingly referred to the story as "Shush."

Related Stories: Norman Osborn and Peter Parker came to an understanding in Peter Parker Spider-Man #44-47. The truce ended in The Pulse #1-5. Eddie Brock was revealed to have cancer in Spectacular Spider-Man #1-5. He next appeared in Sensational Spider-Man #38-39. The Mac Gargan Venom became a member of the Thunderbolts and the Dark Avengers.

Scene Analysis:  In which we look at pages from the stories to determine what worked so well. 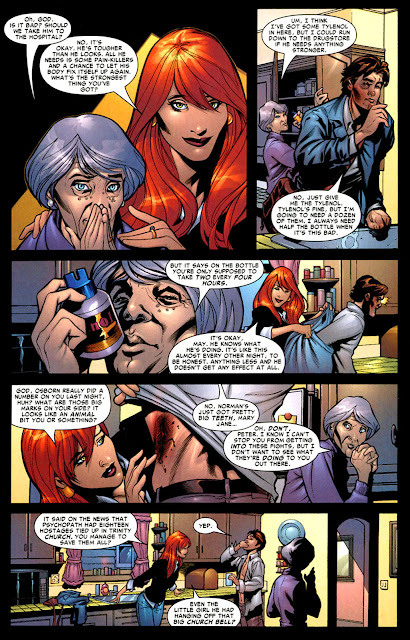 Being Spider-Man is brutal work, and this scene from the first issue, shortly after a battle with the Green Goblin, showcases that. Aunt May's still new at it, but MJ is an old hand. And then there's the reason for the bite marks. 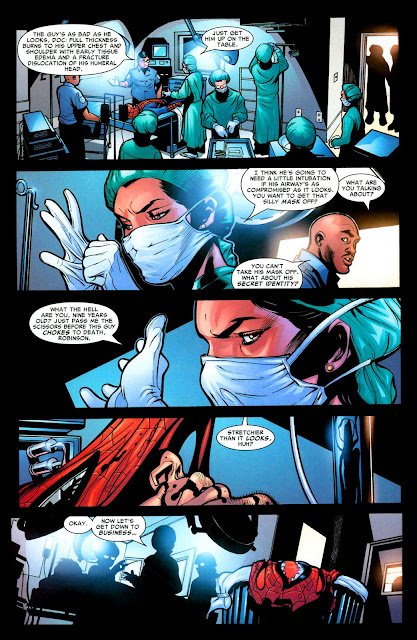 Spider-Man takes a few beatings in this story, and the consequences of brutal. Millar also disposes of an old staple of superhero comics, as a doctor doesn't hesitate to remove Spider-Man's mask. 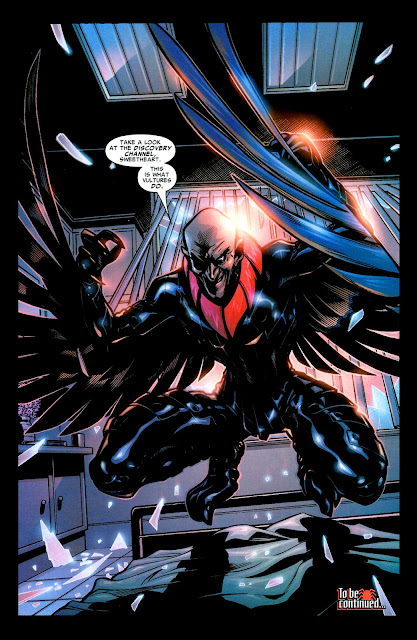 It's worth singling out Millar and Dodson's take on the Vulture. It makes perfect sense for the guy to attack Spidey while he's passed out in a hospital. Having the villain take after his animal namesake fits his intelligence, and his viciousness. It's a reminder of why the old guy with wings is not be underestimated. 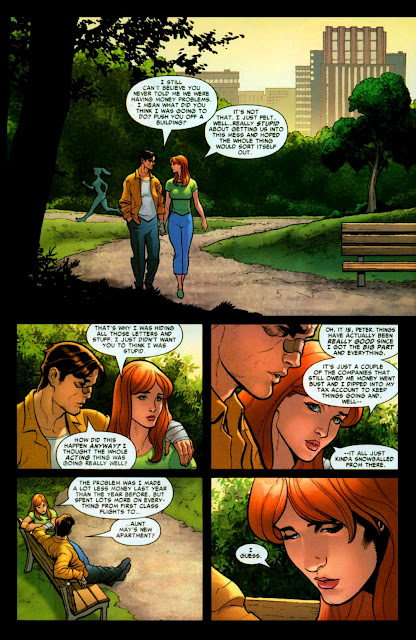 It's a shame that the other creative teams didn't take advantage of this. It's a lovely scene with Peter and MJ having a mature discussion about financial difficulties, as they realize that life is going to be a little bit harder. It's something we can all identify with, and proof that Peter could still have serious problems even when he's married. 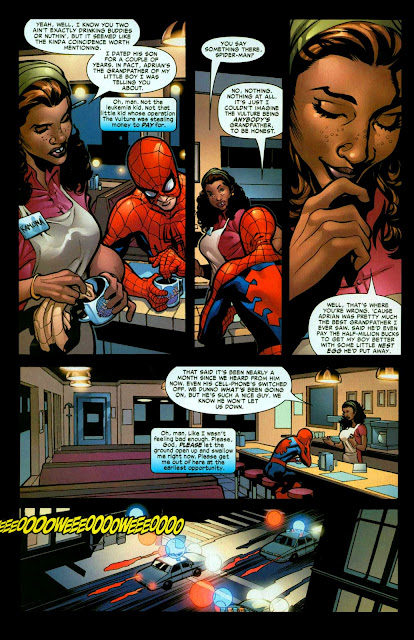 There are echoes of "The Kid Who Collects Spider-Man" in this scene as Peter realizes that something he caused some harm by stopping the Vulture earlier. And the waitress doesn't realize a thing, and just keeps telling him about her son. It had started out well with an exhausted Spidey stopping at a dinner, but then Millar took the scene in a different direction. 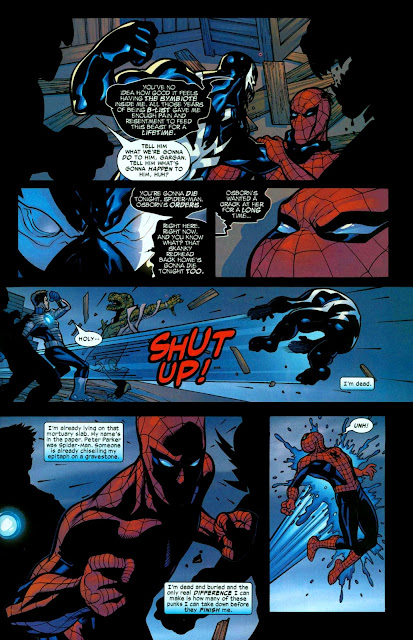 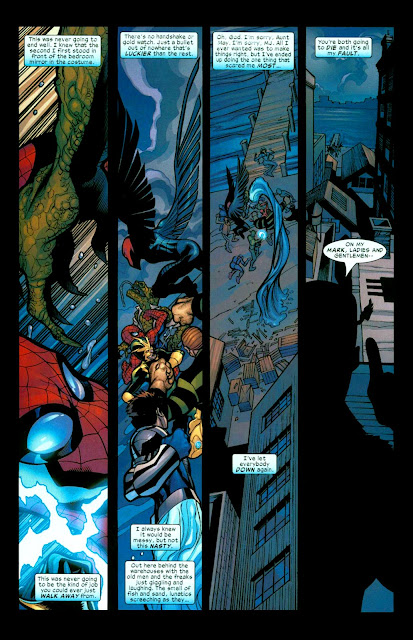 Several of the best Spider-Man stories have a scene in which the wall-crawler is pushed to his physical limit, and this is not exception. It's a fantastic take on a Spider-Man who is certain that he's going to die, but who knows that it still matters whether he can take a few of the Sinister Twelve down with him. The "camera" going from extreme close-up to extreme long-shot is also just brilliant storytelling.