To celebrate Spider-Man's fiftieth anniversary, we're doing a countdown of the fifty best Spider-Man stories.  The top ten starts tomorrow, but first it's time for #13-11. 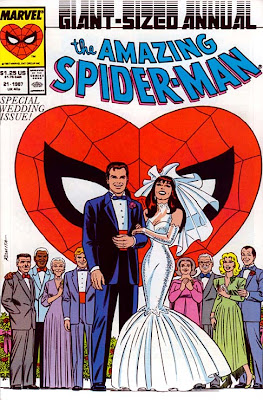 What Happened: Peter Parker and Mary Jane are getting married. He has to worry about the possibility that Spider-Man's enemies will target his wife, while she's wondering whether she's even ready to settle down.

Why It's In The Top 50: Jesse Brown explains what he liked about the story.


Spidey's marriage to MJ was a major decision among Marvel. Having their premier hero give up the bachelor lifestyle and commit to one woman, again showcased Marvel's trend setting leadership in comics. The story really set the foundation for Peter and Mary Jane's long standing commitment to each other. Some of the very best Spider-Man stories offer us deep insight into the characters, and creatively open up their world to us. The Marriage tale is absolutely one of these stories, showing us the very personal and human side to the man behind the mask, as well as Mary Jane.

No doubt it's a love story with a predictably happy ending but, the struggle these two faced along the way makes it a well deserved one. 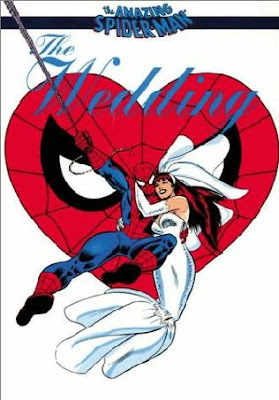 What the pros say: In a roundtable discussion on the wedding for Back Issue! Magazine #23, writer David Michelinie explained his initial trepidation.


To be honest, I wasn't thrilled. Having Peter get married would change the character forever; he could never be single again. He could only be widowed or divorced, which is an awful amount of baggage to carry around. Of course this was before the era of "reimagining," which allows the series to start over from scratch every few years, correcting old mistakes while making new ones.

The Amazing Spider-Man was the title that got me back into comics in college, so I was a little disappointed when I was finally given the chance to write Amazing, literally my dream job, only to find that I wouldn't be able to write the same character I had been reading about for all those years. I have to admit that it was still fun, and provided a lot of interesting story opportunities, but it was definitely something I had to adjust to.

His initial plan for the annual was a little different. He would go on to do a similar story for Amazing Spider-Man #350.


I wrote a plot for the wedding issue but Marvel decided to go with another approach. I had tried to do something a little different, something to make the story stand out from the usual supervillain-crashes-hero's-nuptials thing. As the story developed I had Peter discussing matters with dead people- Uncle Ben, Gwen Stacy, etc.- as if this was a common occurrence. It turned out that Peter was suffering a concussion from a recent battle with a bad guy, and these conversations were all in his mind, the way he dealt with his insecurities about whether he was ready for marriage, whether he'd be a good husband, whether he'd be putting Mary Jane in danger, etc. I was told that Marvel liked my plot, but that they had decided to go with a more standard format because they hoped the event would bring a lot of non-comics readers to the book, and they want something that would be accessible to mass audiences. I understood that, and was happy to script from Jim's plot.


Did You Know... Artist Paul Ryan left comics for the world of politics? He is the same Paul Ryan who was elected to Congress to represent Wisconsin's first Congressional district in 1998. The artist of the Spider-Man wedding issue is currently chairman of the House Finance Committee and considered a potential running mate for Mitt Romney. 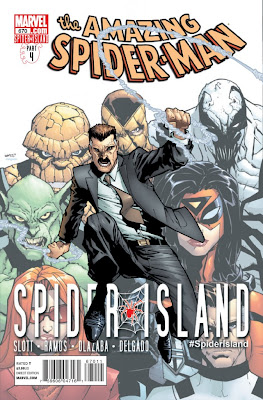 What Happened: The Jackal, the mad scientist best know for cloning Spider-Man, decides to give everyone in Manhattan spider-powers. Like a virus, we see civilians and superheroes slowly obtain spider-powers. Unfortunately, not everyone with great power has great responsibility, and things start to get ugly. To make matters worst, the people eventually start turning into something different. Pretty soon, what everyone thought was a gift to mankind, soon becomes another daylight horror leaving Spider-Man to save the day.

Why It's In The Top 50: Bulletproofsponge explains:

In my opinion, not only was the whole concept a success, but rather the minor details within the event that puts this event in the top 50. Some of the minor details include:
1) Spider-Man learning Kung Fu to outclass the other Spider-men.2) The classic ending to the story which involves Kaine (this part probably automatically adds 10 points).3) Plot twists within the story, which I will try not to spoil, but includes big names like Captain America and the Jackal dying, but not dying ( get it?)4) The appearance of Anti-Venom and Venom, not to mention a much anticipated fight between the two.5) A slight rekindling of the Peter/MJ relationship which was popular among fans of the marriage.
This event essentially had everything Spider-Man fans wanted and more, thus making it one of the most notable Spider-Man stories in a while. What also made it special is the fact that characters like Cloak and Dagger, Spider-girl, King-Pin who aren't that popular these days were also included.

What the pros say: In a Newsarama interview, Dan Slott explained the scope of the story.

Yep. I am so impressed. The scope of this is big. It's all of Manhattan. At times we see all the New York superheroes, and different people of all shapes and sizes with spider-powers. It's crazy. There's a page we got in not too long ago where for any OTHER book it’d be a splash page — one character addressing a horde of different superheroes. You look at it and go, "That's crazy!" And that's panel FOUR! And that's Humberto! He will just go in, not take any shortcuts, and he'll get that page done, and it'll be gorgeous! 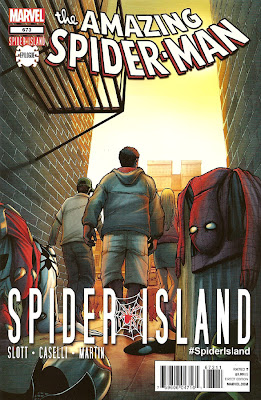 What others say:  USA Today said the "Spider-Island" story was Dan Slott's "most ambitious and sprawling" story yet.
Crave Online reviewer, Andy Hunsaker says: " There's so much to see. So much to enjoy. So much to love about Spider Island. Thank you, Mr. Slott, for restoring our faith in the ability to tell epic stories without sacrificing character or charisma.


Spider Island was #28 on CBR's list of the best Spider-Man stories to date. Mark Ginnochoi reviewed the storyline and its tie-ins. He referred to Amazing Spider-Man #672 as a modern classic.


Related Stories: Spider-Man learned Kung Fu in the 2011 Amazing Spider-Man Free Comic Book Day Special, which foreshadowed this storyline. Spider-Man had lost his spider-sense in Amazing Spider-Man #652-654. The Queen had previously been introduced in Spectacular Spider-Man Volume 2 #15-20. She was not a villain many were expecting to return. Kaine became the new Scarlet Spider and received a solo spinoff title. 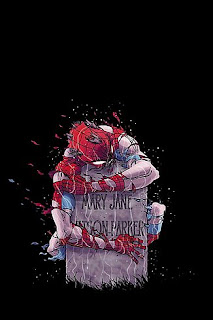 What Happened: In an alternate future, where Peter is approximately 60 years old, costumed heroes and villains alike have been outlawed. No masks are allowed. There has not been a 'terrorist' incident in several years. Patrolling the city daily is a group of law enforcers known as the Reign.


This is a story of a broken, old, and seemingly slightly senile Peter Parker, who has absolutely no luck in this world as an old man. Mary Jane had passed away several years ago from something that caused Peter Parker a tremendous amount of pain and regret. Peter has forgotten about Spider-Man until one day, Jonah Jameson appears on his door, indirectly handing him his black Spider-Man mask, when he suspects something big and bad is about to take place in NY.

Why It's In The Top 50: Bulletproofsponge explains..

This story is pretty popular because most people like to know what happens to Spider-Man in the future. No doubt, this story does not take place in the 616 universe, however, it is a possible 'ending' for Peter.

In this reality, Peter has hung up his costume due to guilt and his own hate for it, not because it is against the law. Once again, we have another romantic-ish story about Mary Jane and Peter, thus automatically adding points to the spider-marriage supporting crowd.

Finally, this story brings back Spider-Man's classic villains - the Sinister Six ( like Spidey, they have not made an appearance for years and years!) and an evolved supervillain whom I shall not name, less I spoil the story. Anyway, his appearance, or rather the way he appears in this issue also adds points to this story. 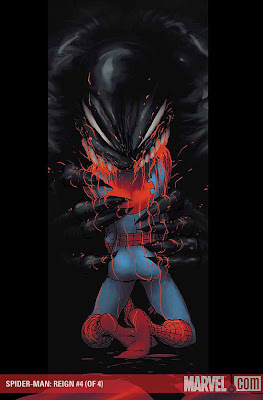 What the pros say: In a CBR interview, Kaare Andrews explains his approach to the book.

When it comes to villains, Andrews is a bit more guarded about who will appear, though he does offer some hints. "All of my favorite Spider-Man characters are in this book. I won't tell you who they are," Andrews said. "There is definitely one villain that no one would ever think of but for the most part you could probably guess any of the top tier Spider-Man villains and I would nod my head. I also have a new villain, the worst kind of terrible scum you could imagine: a politician."

While not as dark or graphic as their MAX imprint, the Marvel Knights imprint is reserved for grittier, more "mature" takes on classic Marvel heroes and "Spider-Man: Reign" will be published under that imprint. Andrews explained why this book needed to be a Marvel Knights series. "I could not tell this story without the 'mature readers' tone of Marvel Knights," he contends. "It wouldn't fit. This story, more than any normal Spider-Man story, is about hurt and pain. Grieving and violence. It's about hiding and turning your back on the world you live in. The label isn't there as an excuse for Peter to curse. It's there because I am dealing with adult themes and real world consequences.

"I have a boxed set of 1960s Spider-Man cartoons I can lend you if you want to show something to your kids. Or maybe they're old enough to watch the new movies. I'm just saying you already have that. If all you're looking for is what you know then best wishes. But if you're looking for something new, something you haven't seen, we'll hook you up."

For an artist with as unique a style as Andrews, it shouldn't come as a surprise that the inspirations behind his work are also quite interesting. The creator is drawing on his love of Spider-Man, but taking it further by mixing his own passion for the human condition and the comic book medium itself. "In terms of visuals I am firmly setting the style of art as a kind of 80s-future hybrid," explained Andrews. "I love this medium and want to see it grow both in artistic and technological terms. But I am also paying tribute to that decade when I first knew of and embraced this medium.

"The answer to all of these questions, one way or another, is pain."

What others say:  Reign was #17 on Complex.com's list of the top Spider-Man stories. It was #47 on CBR's list.

Related Stories: Kaare Andrews was heavily inspired by The Dark Knight Returns on this one, so in the event you only read Spider-Man comics, you should go hunt that one down.
<<PREVIOUS NEXT >>