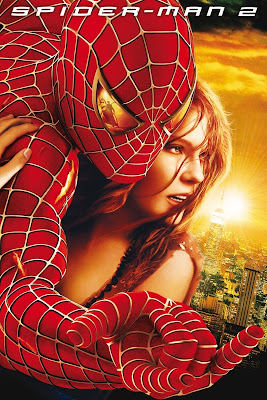 Ninth on our list of the best Spider-Man stories is 2004's Spider-Man 2.

What Happened: Peter Parker still struggles to balance his private life with his duties as Spider-Man, who his best friend blames for the suspicious death of his father. The girl he loves is engaged to someone else. And his mentor has gained super powers, and gone insane. But a solution seems to present itself, as Peter Parker loses his powers. So what about his responsibility?

Why It's In The Top 50: Mister Mets explains his response to the film.

This was a perfect continuation of the first Spider-Man movie, and may have more great moments than any of the other stories (although to be fair it's going to take a larger chunk of your time to watch this than to read Kraven's Last Hunt.) Tobey Maguire's performance as Peter Parker, and Spider-Man is excellent. Alfred Molina's Doctor Octopus is a compelling villain, and his battles with Spider-Man have only been topped once in the comics (more on that later). Harry Osborn's story has never been handled better, and left you disappointed that it was going to be another three years until the sequel (and that left you disappointed for other reasons). Rosemary Harris delivers an extraordinary performance as Aunt May, especially when Peter tells her of his connection to Uncle Ben's death. JK Simmons is again excellent as J. Jonah Jameson. My crush on Kirsten Dunst continues, and Peter's infatuation with Mary Jane came to it's perfect conclusion. There are a lot of great Parker luck moments like his landlord taking his twenty bucks, his ineffective search for hors d'oeuvres and his meeting with Bruce Campbell. The subplot with him losing his powers was lifted directly from Amazing Spider-Man Annual #1, but worked superbly. Given another five minutes, I'd come up with a lot of other great things about this movie.

I left the first Spider-Man movie wondering how I would have done that movie. I left Spider-Man 2 thinking about what I'd do for Spider-Man 3, because I couldn't top the sequel. 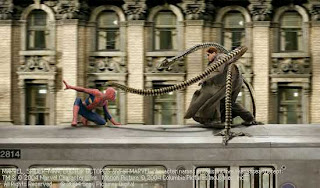 With Spider-Man 2, Sam Raimi took nearly everything that makes Spider-Man such a compelling character and distilled it into one movie. Tobey Maguire was briliant as the nerdy, down-on-his-luck Peter Parker, and Raimi had no bones about making life more difficult for Peter every chance he got. Little touches like Peter's broken apartment door, accidentally washing his Spider-Man costume with his whites, not being able to get a drink at a party; this film is chalk full of great, humbling Spider-Man moments. The film also balances Peter's relationship with his supporting cast perfectly; whether it's his strained relationship with Harry Osborn, his love for Mary Jane or his Aunt May's money problems. Alfred Molina made Doctor Octopus a compelling, sympathetic character in addition to being a great visual (those tentacles looked awesome). Spidey's battles with Doc Ock are still some of the best superhero fight scenes ever put on film, and help make Spider-Man 2 the best looking film of the trilogy. This movie was a rare case where everything came together perfectly to create not only a great Spider-Man movie, but a great Spider-Man story in general.


What the pros say: Writer Michael Chabon explained in a Q&A how he came to work in the film, and the main difference between Spider-Man 2 and the much less successful (artistically speaking) Spider-Man 3.

In his Spider-Man Manifesto, Tom Brevoort praised the film as a model for the writers.

The second SPIDER-MAN film hits all of the right essential notes: Peter is a struggling, young guy, has a tough time making ends meet, and his romantic life is complicated by the pull he feels to go out and take action as Spidey. Being Spider-Man is a release, but it's also a sacrifice. If you're not always putting Spidey in a situation where he has to choose between his everyday responsibilities and those of being a superhero, then you're doing something wrong.

What others say: Roger Ebert said it was one of the ten best films of 2004.


Here's the best superhero movie ever made. The genre does not lend itself to greatness, although the first "Superman" movie had considerable artistry and "Blade II" and "The Hulk" had their qualities. DirectorSam Raimi's first Spider-Man movie was thin and the special effects too cartoony, but the sequel is a transformation. Tobey Maguire and Kirsten Dunstbring unusual emotional complexity to comic book characters, Alfred Molina's Doc Ock is one of the great movie villains, and the special effects, while understandably not "realistic," bring a presence and a sense of (literal) gravity to the film; Spider-Man now seems like a human and not a drawing as he swings from the skyscrapers, and his personal problems -- always the strong point of the Marvel comics -- are given full weight and importance. A great entertainment.

Johanna of Comics Worth Reading reviewed the Blu-Ray.

Spider-Man 2 is immensely faithful to the comics. It captures Parker’s struggles to balance friends, family, secrets, school, and a job in such a way many can relate. That’s one of the many reasons Spider-Man was truly something new when he was created — he was distinctly working-class with money struggles that none of the others had, most of whom were playboy millionaires or alien royalty.

Scene Analysis: After what remains the most impressive fight scene in any supehero film, Spider-Man has to save a train full of people. This is essentially the movie's version of the impossible task scene that's been a staple of the series since Amazing Spider-Man #33. Raimi and Maguire balance the immensity of the deed with the unlikeness of the hero.