Reaching number seven in out top Fifty best Spider-Man stories, we have... 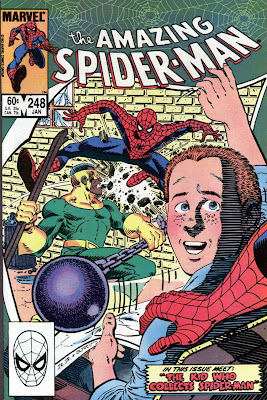 What Happened: Inspired by a newspaper article, Spider-Man pays a visit to his biggest fan.

Why It's In The Top 50: Mister Mets considers why it's on every list of the best Spider-Man stories..

If you know anything about Spider-Man, this story's appearance on the list shouldn't surprise you. Stern didn't know where the story would be published, and figured it would just be a back-up story in an annual somewhere, until Assistant Editor's month came, and writers were told to be experimental. Thus Roger Stern wrote two Spider-Man stories showcasing different sides of Spider-Man. "He Strike Like a Thunderball" is a decent action story. But "The Kid Who Collects Spider-Man" is one of the most touching, and enjoyable comic books ever written. It is the one comic book more than any other that you can give to anyone, as an introduction to the medium. I'd almost say that it should be included in English textbooks, but comics are supposed to be more subversive than that.

It's the simple story of a hero visiting a fan (of which more than a handful have been written afterwards, many of them good) but there are real flashes of genius here. I love Spider-Man recounting the death of his Uncle Ben, and getting choked up, and the fan comforting him. I love the kid's collection of Spider-Man artifacts, especially his album full of Jonah's retractions. And then there's the scene where the kid wants to know where Spider-Man is, and the final page (don't want to spoil it here, although the ending's famous enough that you may have heard of it, even if you've never read it.)

Sony may have made a mistake telling Spider-Man's origin again, when they could have just started The Amazing Spider-Man with a ten minute adaptation of this comic. There's simply no better way to introduce new audiences to the character of Spider-Man, and perhaps increase Garfield's chances of getting an Oscar nod. The only problem would be that the rest of the would most likely not hold up to that sequence.

What the pros say: In a 1996 interview with Spiderfan, Roger Stern explained his fear that he was accidentally ripping off someone else's comic book.


I just woke up with the idea one morning ... and had the uncomfortable feeling that it must have been some early Superman story that I'd read when I was younger. In fact I went around for about a week, telling the story to people at Marvel and asking if they could remember such a story.

Partly, I'm sure that it sprang from a desire on my part to do a short human-interest story in the style of Will Eisner -- that's why the story is partially advanced through newspaper clippings...I was trying to be Eisneresque.

In Comics Creators on Spider-Man, Ron Frenz recalls the impact the story had on his career.


That story was just amazing. There's not a lot of superhero action in it, but it was a wonderful experience for a long time Spider-Man fan like me. I remember I pulled out all my old Ditko reference because I somehow felt that the kid was talking about the classic Ditko Spider-Man. I still think of it as the highlight of my career. I'm very proud to look back on it after twenty years or so. That story might even be the deciding factor on why I was offered Amazing.

Related Stories: This story is alluded to in several of the best Spider-Man stories, including "The Death of Jean Dewolfe" and "No One Dies."

Scene Analysis: In which we look at pages from the top ten Spider-Man stories to see why it works. 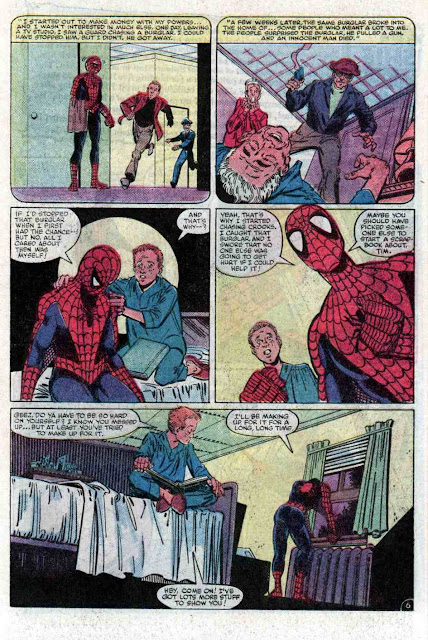 This is a great take on Spider-Man's characterization. Because of the circumstances behind Uncle Ben's death, he doesn't think he's worthy of Tim's adoration. And he's not afraid to say that. I also like how Tim tries to change the subject, and how it doesn't change his impression.

Despite Stern's suspicion that the story had been told with Superman, this page shows why it's so much more effective with Spider-Man. Unlike Superman, there was an incident that motivated Spider-Man to do what he does. There's something for Spidey to feel pained about. 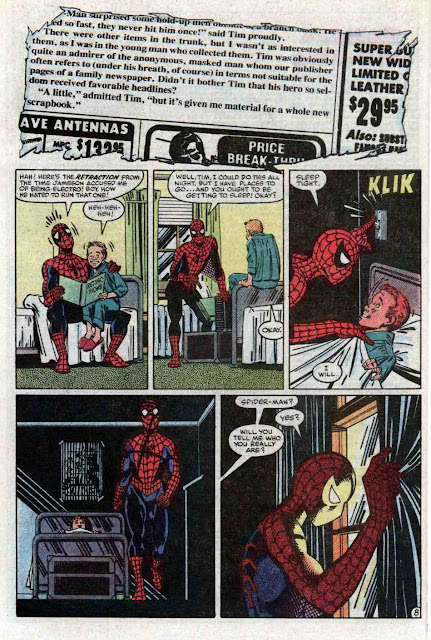 The retractions notebook is a great gag, but it's quite revealing that the Bugle reporter who wrote about Tim was allowed to mention something that had to be a sore spot for the publisher.

I also like the set-up to the final question. Spider-Man's ready to leave, and thinks the conversation is over. And then Tim asks him a question that's even more difficult than the one about Uncle Ben.

And does Spidey look sad at the last panel? There's a reason for that.