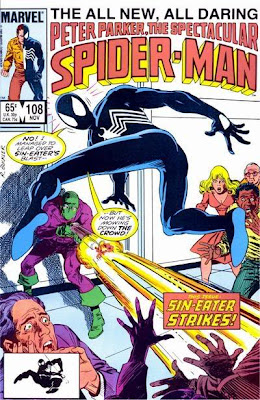 We've reached the top ten of our countdown, and I sincerely doubt that anyone is surprised to find this story on the list.

What Happened: A psycho with a shotgun has killed Jean Dewolff, one of the few police officers on good terms with Spider-Man. And he also killed a judge who was friends with Matt Murdoch. So the wall-crawler and the man without fear are pushed to their limits.

Why It's In The Top 50: Mister Mets is jealous of Peter David's first year as a comic book writer.

Peter David had only been writing comic books for a few months when he penned this classic, which is great for a lot of reasons. Jean De Wolff at the time a popular supporting cast member (although I suspect she's now mostly known for her death), and dies four pages into the story, a twist on the traditional comic book death. The killer isn't really a supervillain, but an ordinary psycho with a shotgun. Daredevil becomes involved when the killer targets one of his friends, and this story really demonstrates the differences between him and Spider-Man. Things go badly with Spider-Man, as a bystander is killed in the battle by a shotgun blast Spider-Man dodges. 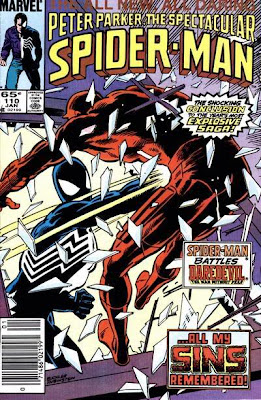 As a murder mystery in comics, it's second only to Watchmen. There are plenty of twists, including Peter Parker VS a crazed gunman in the Daily Bugle. There are great scenes with J. Jonah Jameson, including his win over a black preacher who is surprised to find a white man knowledgeable about the civil rights movement, and reaction to the chaos at the Bugle. There's a great new character in sympathetic cop Stan Carter, who decides to help Spider-Man against his better judgment. There's an excellent subplot involving Ernie Popchik, a World War 2 veteran who takes drastic action after being mugged. There are some awesome interrogation scenes featuring a pissed off Spider-Man.

And it all ends in one of the most violent battles of Spider-Man's career. Against Daredevil. I'm slightly regretting not ranking it higher right now.

What the pros say: In a roundtable discussion for Write Now! Magazine #14, Peter David explained what he wanted to bring to the Spider-Man comics.

I tried to push Spider-Man to points he had never reached brfore. To see if I could get him into a situation where he was so angry that he just completely lost control. Anyone who's ever been in a real fight will tell you that the adrenaline doesn't get turned on and off like a light switch. So it's fundamentally unrealistic to have heroes be in knock down, drag out fights and then just stop. Since Owsley wanted me taking a more grim and gritty street-level approach to the series, I felt the first thing I had to do was put Spider-Man into a battle situation where what would happen in real life would happen. I tried to then maintain that tone for the rest of my run.

What others say: This is one of the few Spider-Man stories everyone agrees is great. It was #6 in Wizard's Top Ten Spider-Man stories list a few years back. Complex.com placed the story at #11. JR Fettinger included it in his Top Ten. It was #4 on IGN's list and on CBR's list.

There's another commentary on it on Madgoblin's site But DON'T READ it unless you've read the story (there's a major spoiler).

Unsung Hero: In his afterword to The Death of Jean Dewolfe Trade Paperback, Peter David credits editor James Owsley (now better known as Priest) for helping him break down the story.

Scene Analysis: As a special feature for the top ten, we're looking in-depth at why scenes from the best Spider-Man stories work so well. Mister Mets explains. 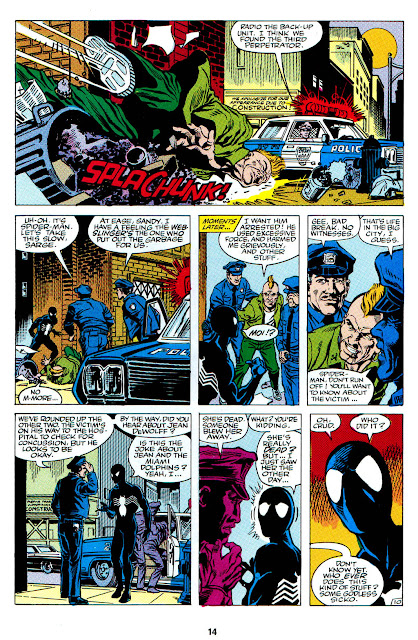 I thought it was rather effective how Spider-Man learned that Jean Dewolfe was killed. He has a friendly chat with some cops, and thinks they're talking about something funny, when the topic of conversation is much more tragic than that. It's something that Peter David does rather well as a writer, alternating from the humorous to the serious. It's life. Bad stuff is going to happen, and it's going to interrupt when you're having fun. 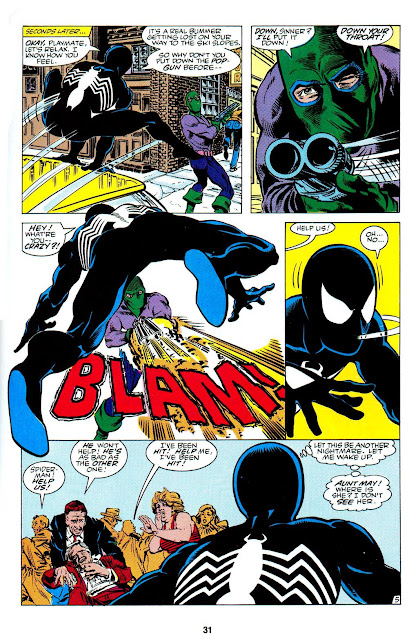 It's rather daring for a comic in the 1980s to wait until the second part of the story to pit Spider-Man against the villain. And while the Sin-Eater shouldn't be much of a challenge for Spider-Man, the situation very quickly devolves, with a civilian taking a shotgun shell to the chest. Peter David and Rick Leonardi understand that even battles in which the hero is much stronger than the villain can turn into a chaotic mess. 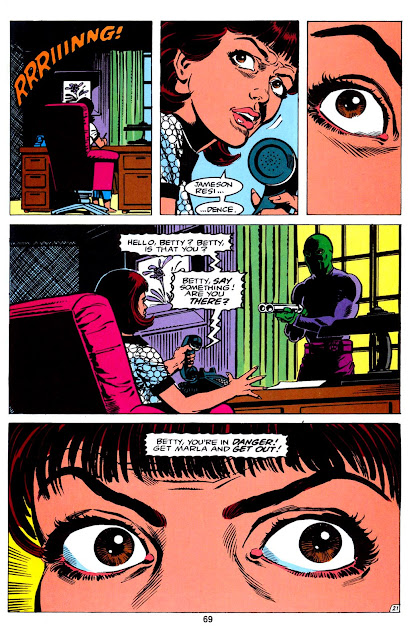 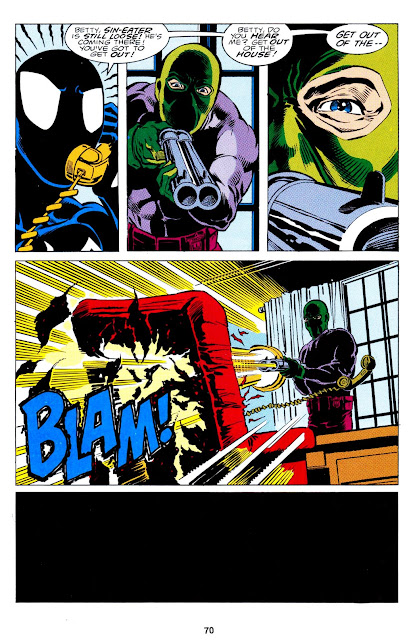 The first two issues all ended the same way. The Sin-Eater finds a target, fires and then it fades to black. And the payoff was this incredible cliffhanger for the third issue in which Spider-Man tries to warn Betty Brant that the Sin-Eater is heading to the same place she is. The storytelling and the suspense is perfect here. It had to be torture for the fans who waited 28 days to find out what happened next. 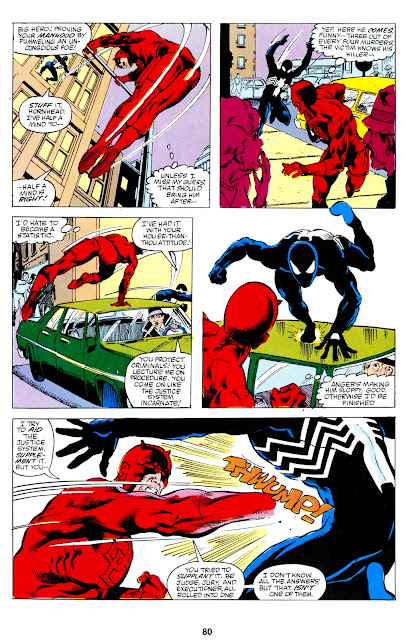 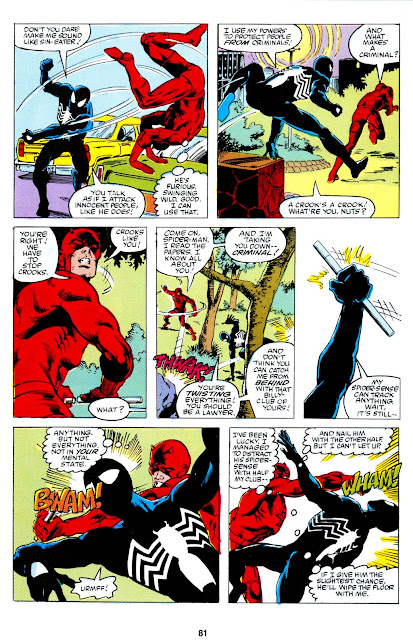 "The Death of Jean Dewolfe" explored the difference in moral codes between Spider-Man and Daredevil. If Peter David and Rick Leonardi wanted to show what Spider-Man's like in a real fight, they succeeded. This one's different from the obligatory fight scene in the typical superhero team-up. It isn't a result of a misunderstanding. And the lead of the story is the dangerous one. It's off-putting to have Daredevil make a joke about the possibility that Spider-Man's going to kill him.