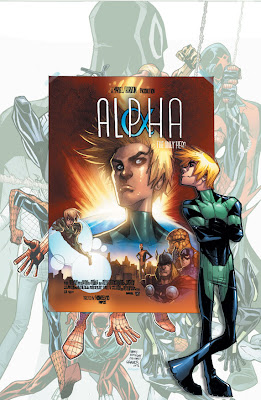 Last night, it was announced that Spider-Man will have a new sidekick, to be introduced in a 50th Anniversary arc from Amazing Spider-Man #692-693. Immediately, critics of One More Day asked if this development didn't undercut Marvel's argument for breaking up Peter & MJ, as well as various mission statements from editors regarding the franchise.

At this point, it's important to establish that we don't know a whole lot about the story. Many predictions are going to be premature. We don't even know if Alpha will still be around after the end of the story, to say nothing of Amazing Spider-Man #700, another deluxe sized highly promoted anniversary issue that Slott is currently setting up. That said, if Spider-Man's partnership with Alpha becomes a part of the series for the forseeable future, I think it would it still work under the Illusion of Change.


There's no reason for the status quo to be permanent, or to restrict subsequent writers. It does seem like something that can be easily reversed without Spider-Man having to make any deals with Mephisto. If someone doesn't want to tell stories in which Spider-Man has a a sidekick, Alpha could lose his powers, become a villain, or just decide to go his separate way.

One of the arguments for ending the marriage was that it made Spidey older, so is there is the question of whether a similar presumption could apply here. Writing for examine.com, Brian Steinberg notes the origins of superhero sidekicks.

We think it's interesting because it shows just how few ideas are left in the comic-book publishers' arsenals. Teen sidekicks were once viewed as a way to lure young readers to the comics' four-color pages. It was a lot easier for an eight-year-old to envision oneself as Robin or Stripesy, after all, than it was to imagine he or she was the moderately older Batman or Star-Spangled Kid. Now that most comic books are read by guys in their 30s and 40s who have yet to ditch the trappings of their childhood, young sidekicks may not be the draw they once were (and if they are a draw, well, that seems a little, um, sick).


Having Peter Parker feel responsible for an accident that gives a teenager from Midtown High superpowers is an appropriate tale at this particular time, the 50th Anniversary of Amazing Spider-Man. While it makes it clear how much Peter has changed since he got powers, that's something that's unavoidable at a time when people are paying more attention to Spider-Man's impressive legacy, such as in this website's look at the 50 best Spider-Man stories to date (Sorry, couldn't resist the shameless plug.) When celebrating fifty years of content, there's no way to avoid the reader's awareness that Peter Parker has been Spider-Man for some time, and that he's had a lot of adventures.

There is the argument that giving Spider-Man a sidekick makes him more generic. His current job at Horizon Labs means that he now has a great degree of respectability, as well as access to things that make his life easier as a superhero. His financial problems are a thing of the past, and he's on several superhero teams.

Since Alpha is supposed to be more powerful than Spider-Man, it does seem like a different dynamic than the most famous superhero duos (Batman & Robin, Captain America & Bucky, Green Arrow & Speedy, etc.) Dan Slott also suggested that Spider-Man's personality means that this partnership will be unlike any seen in comics.


"If you put Spider-Man and Batman in the same situation, you're going to have way more fun with Spider-Man," said “Amazing Spider-Man” writer Dan Slott. "With Batman, he never really screws up the way Spider-Man does; he always seems to make the right decision. But with Spider-Man, he always screws up. He's us as a superhero. Batman is a paragon of what we'd like to be, but in reality, we're more like Spider-Man. He makes all the mistakes we make."

As with most stories, the quality depends on the execution rather than the concept. But there doesn't seem to be anything inherently defective with what's been announced so far. While Spider-Man has partnered with other heroes before, this is a new story engine of the series. It demonstrates that there are still new stories left to tell after fifty years.