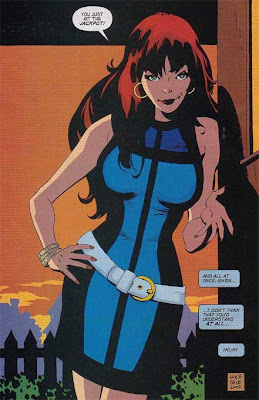 I'm not sure where the misfire was on Mary Jane. MJ was a man-eater: a fiery and outgoing person who immediately became the life of any party and sucked all the air out of any room she walked into. MJ was aggressive in a playful way, very direct, and used to make Peter's knees shake just by looking him in the eye. She was not this... onion... Dunst portrays in the movie, who has no idea the boy next door has a crush on her. Stan Lee's MJ knew everybody had a crush on her. She didn't use it to an unfair advantage, but she had fun with it. She was a party girl. She called Peter, "Tiger," which was her way of gently mocking him (actually, she called all the guys, "Tiger," because there were too many guys to remember all the names). Mary Jane was a much brighter personality, a much sharper person, than the Dunst character, who came across as a little vapid and very bland. Dunst was playing more of Gwen Stacey, Peter Parker's actual love interest (his romance with MJ didn't really kick into high gear until Marvel decided to pervert my Spider-Man versus Wolverine into an excuse for the two to get married, but that's another story).

Kurt Buisek, whose run on Untold Tales of Spider-Man totally got robbed on our list of the best Spider-man stories,  had a similar point on a post at CBR about Spider-Man's love life.

I have to admit, my interest isn't in Peter finding the right girl, but in being entertaining. If being miserable makes him entertaining, then maybe he should meet the wrong girls.

I'm one of the Vicious Cabal that thinks the marriage should never have happened. I thought Gwen was kind of a drip -- very sweet and lovable and passive, when she wasn't irrationally jealous or angry about something. She'd probably have made Peter an excellent wife, but the result wouldn't have been exciting, which is why John Romita thought it would be a good idea to kill her off -- she makes a much better "ideal girl lost forever" than she does an active player in an ensemble cast. I liked MJ when she was an overcaffeinated hipster, and lost a lot of interest in her when she turned out to be a product of a broken, abusive home, and under the "laughing on the outside" exterior was a sad, wounded moper like so much of the rest of the cast -- Peter, MJ, Flash, Betty, Liz, Harry...sometimes it seems like everyone in the cast is from a damaged background. Still, she had more drive to do her own thing than Gwen did, and that made for better drama.

It's worth remembering that Mary Jane was popular shortly after her introduction. Fans voted her the best female supporting character in comics in the 1967 Alley Awards. The take on the character changed drastically since then. The defining moment may have been when Defalco had Mary Jane reveal that she had always known that Peter Parker was Spider-Man, although the marriage was also quite significant. One can easily argue that by changing her into a more conventional spouse, they did regress the character and make her less interesting. 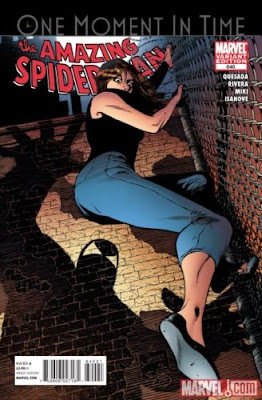 A few years ago, a youtube critic named Mike from Milwaukee got some attention systematically pointing out the flaws of Star Wars: The Phantom Menace. One of his arguments against the lesser movie was that it was difficult to describe the characters without talking about their appearance, their profession, their clothing, or their role in the movie. On CBR, I asked the same question about Mary Jane. The problem with the Star Wars prequel characters is that they're bland, which isn't true of MJ. However, she doesn't really have a consistent "identity" in the comics or other media.

The Lee/ Romita Mary Jane was the outgoing center of attention, which worked in a more localized context, when she wasn't the center of attention amongst movie stars and celebrities. This was a little bit at odds with the emotionally damaged celebrity (supermodel/ soap opera star) we usually saw as Peter Parker's loving and supportive wife.

Ultimate Mary Jane (or Brainy Jane) was a younger version of Peter's supportive wife (minus the celebrity) but didn't have much in common with the Lee/ Romita Mary Jane. And the movie Mary Jane seemed to be an amalgamation of several love interests in the Spider-Man comics. Like Liz Allen, she was the most popular girl in Midtown High. Like Gwen Stacy, she kept getting thrown off bridges.

This is not to suggest that one portrayal of Mary Jane is weaker because others have a different take, but this leaves me to wonder about what's at the core of Mary Jane's character. And that's important when considering what she brings to the franchise. This is an issue with most characters in these types of serials, figuring out how to balance progression with maintaining the core appeal of a character.

Some readers think her background is compelling. I don't think it's particularly important, as this wasn't an concern for the first 200 issues since her first appearance. Mary Jane was popular when she was introduced, and details about her life growing up were more of a blank state. You can argue that the progress made with the character, as she made peace with her upbringing, took her away from her considerable initial appeal. At the very least, it had nothing to do with it.

Mary Jane's probably more popular, but I'd argue that J Jonah Jameson is the best supporting character in comics. He's the definitive critic/ authority figure, the guy who just doesn't understand the everyman hero. The Simpsons essentially had JK Simmons guest-starr twice as Jonah, banking on viewers instantly recognizing the character. And other details make the character memorable: his stinginess, shamelessness, temper and occasional moral fiber.

I like Mary Jane as a character (she's easily in my top ten of Spider-Man characters) but I think she pales in comparison to Aunt May and Jonah, who are more instantly recognizable, at least in terms of personality. To me, it seems that Mary Jane's defining attributes are that she's fun-loving, the center of attention and secretive. It's good for a supporting character, but it's not enough to elevate her to the all-time greats.

Kraven's Last Hunt is probably the most acclaimed Mary Jane storyline. Her role in the "Night Gwen Stacy Died" is memorable, but it's not really her story in quite the same way. But in that story, you don't really see the first two attributes, although you definitely saw the third. One thing Dematteis did quite effectively was that he showed the effect that Peter's secrets have had on Mary Jane, ensuring that she still has to keep a facade for the rest of the world.

She had changed from the best female supporting character of 1967, as the readers became privy to her secrets. One thing that was unique about her in the Silver Age comics was that while Stan Lee was writing the title the reader only ever saw her thoughts once (see below). That contributed to a sense of mystery to the character that just doesn't exist with most members of the supporting cast. 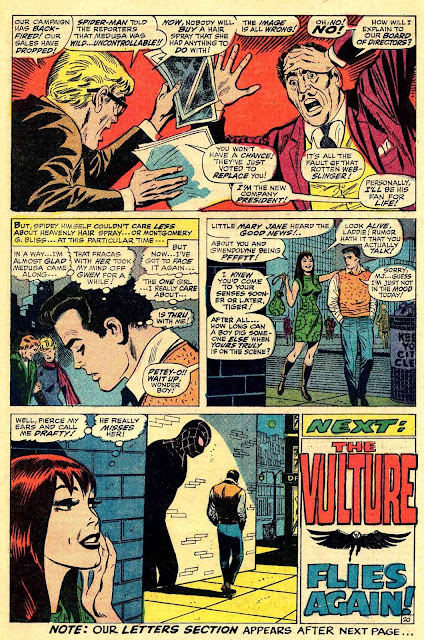 The same arguments that Wolverine is poorly served by overexposure apply just as well to Mary Jane. The character became more predictable and ordinary. Some of that was inevitable when she became the person Peter Parker spent the most time with. It's difficult to make the character enigmatic if the lead is her top confidante.

But she was also poorly served by some of the generic superhero spouse stories. She could be worried that a bullet will get her husband. But it would be uncharacteristic of MJ to be worried that he'll leave her for someone else. She might worry about a violent ex of Peter's doing something dangerous upon realizing that. Although those types of stories aren't particularly interesting the tenth time around. She and Peter continued to have the same arguments. 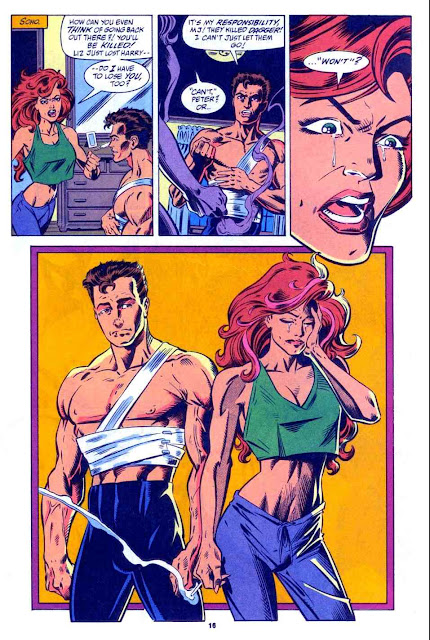 That scene was done before, and it was done again later. After One More Day, there's more potential for Mary Jane to be able to surprise the readers. The writers might also prefer it as it makes life easier for them, but it's also better for the series.