We're continuing the countdown of the top fifty Spider-Man stories. 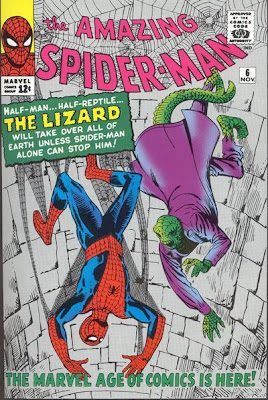 What Happened: Peter Parker convinces J Jonah Jameson to send him to Florida, to get pictures of a half-man, half-reptile monster. While there, Spider-Man decides to seek the advice of Doctor Curt Connors, a local expert on all things reptilian.

Why It's In The Top 50: Combustible Pumpkins explains why he chose this story:


There's nothing more visceral than a human being turning into a man-size lizard and wanting to rule the world through monster-mutating snakes and alligators.  Not only is this The Lizard's first appearance, but it also shows the relevance of this big bad, and what happens when science goes horribly wrong.  I personally would of loved to see Dr. Connors more in modern comics, perhaps even gaining control (most of the time) of his Lizard persona and fighting along side Spidey.  With both characters knowing each other's secret identity, it would make for great plots of tension, science, and redemption for Dr. Connors, but alas, the way The Lizard is being written these days, it doesn't look too good.

What the pros say: In an interview with the Los Angeles Times, Rhys Ifans, who plays the Lizard in the upcoming Amazing Spider-Man movie, explains his take on the character:

What others say: Al Sjoerdsma of spiderfan gave this issue a score of 4/5.  Sam Ruby gave the issue a perfect score of 10/10. 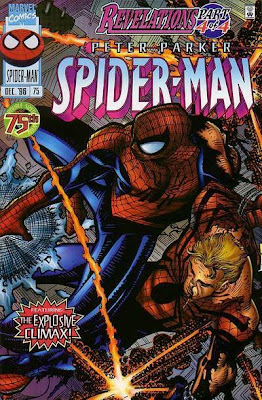 What Happened: The mastermind behind the Clone Saga reveals himself and his motives, and Ben Reilly's life comes to a shocking end in one dramatic showdown, that puts a lid on the lengthy Clone Saga.

Why It's In The Top 50:  Jesse explains why this story is siginificant:


Significantly, this story restores Peter Parker as the original and one true Spider-Man (after years of debate and confusion), as well as reignites the epic feud between Spider-Man and the notorious Green Goblin. Many mysteries are explained and if that weren't enough,fate plays a hand in the birth of MJ and Peter's child.

Spiderfan001 explains why he likes this story:


The showdown between Peter Parker and Norman Osborn in this story is insanely epic, due in no small part to John Romita Jr.'s breath taking visuals.  Ben Reilly's sacrifice at the end of the story ensured that the character went out on a high note.

What others say: Undoubtedly the story marked the end of an era and even ushered in a new status quo. Unfortunately the results of this infamous story line did some irreversible damage. However the memory of it's casualties still inspire fans and writers to wonder, what if ?  The Team over at spiderfan.org gave the last issue of this storyline a 4/5.

Related Stories: The Green Goblin and Spider-Man would continue to wage war against each other, reaching a climax in the "Final Chapter" story line, in which Peter was led to believe his child was alive. Many stories about Ben Reilly have come and gone in alternate universes including Tom Defalco's MC2 universe, and the Spider-Man: The Real Clone Saga miniseries, both of which contain alternate versions of the Clone Saga. 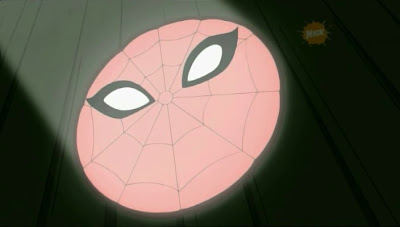 What Happened: On the evening of Midtown High's production of Shakespeare's A Midsummer Night's Dream, Spidey, under the request of Captain Stacy, has volunteered to test the effectiveness of the Vault's new security systems provided by Oscorp.  Unfortunately, the Green Goblin hacks into the system and not only traps everyone inside, but also lets loose all the inmates, all of whom have an axe against the wall-crawler.  At the same time, the Black Cat shows up to help break her father out of prison--someone who has a connection with Spidey that neither he or the Black Cat even realize.  Meanwhile at Midtown High, not only is Peter's girlfriend, Liz Allen, wondering what's keeping her boyfriend, but the cast is wondering where Harry Osborn, the person who is supposed to play the part of Puck, could have gone to.

Why It's In The Top 50: Mike talks about why this was a highlight of the Spectacular Spider-Man animated series.


Spectacular Spider-Man was one of the best animated adaptations ever made of a comic book superhero that was, unfortunately, cancelled all too soon.  This second-to-last episode is an example why it was such a great series, as it not only brings together several plot threads that had been running throughout the course of the series, but also has surprising revelations that, had the series continued, would have made for compelling future episodes--particularly the identity of Black Cat's father which adds a whole new dynamic to her and Spidey's relationship, and makes you wonder why no one writing for the comics ever thought about doing something like this with them before.  Not to mention it has cleverly interweaves lines from Shakespeare, along with terrific and hilarious dialogue, particularly from the Green Goblin, and the return of Mysterio (or is it?) and his constantly chatty robot gargoyles.

What others say: "Arsenal" of Marvel Animation Age gave this episode a positive review.


Related Stories: Spider-Man would face the Green Goblin again in the next episode, which sadly proved to be the series' last, appropriately titled "Final Curtain."  But really, if you haven't checked out the entire run of The Spectacular Spider-Man, you're missing out on one of the best superhero cartoons ever made. 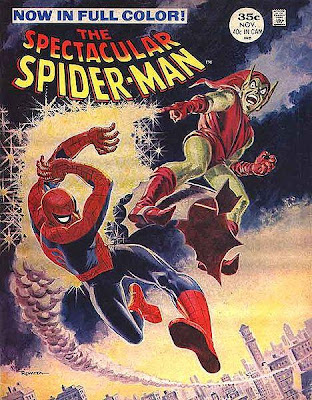 
What Happened: Norman Osborn's memory of being the Green Goblin returns, along with his knowledge of Spider-Man's secret identity.  Using this knowledge, the Goblin embarks on a plan to destroy Spider-Man once and for all.

Why It's In The Top 50:  Combustible Pumpkins explains why he chose this story:


Key issue in which Norman Osborn remembers not only is he the Green Goblin, but Spidey's secret identity too.  It was a big deal at that time since no one else in the Marvel Universe knew who Spidey was.  Pete was a loner back then, too paranoid to let any other hero know his secret alias.

Although GG makes another appearance, this issue could be considered part two of a trilogy between when Goblin first learns Pete is Spidey (ASM # 39) and when he kills Gwen Stacy (ASM # 121).  Spectacular Spidey Magazine 2 is intense, from Norman's mental breakdown, to remembering he's GG, to taunting Peter in front of Pete's loved ones, to the epic splash-page battles which also involved a psychedelic pumpkin.  It's fun and will hold your attention throughout the 40-page story.

What others say: Sam Ruby gave this story a perfect score of 10/10.

Related Stories: The scene where Norman Osborn taunts Peter during dinner was later adapted in the Spider-Man: The Animated Series episode "Turning Point." Elements of it were used in the first Spider-Man movie. 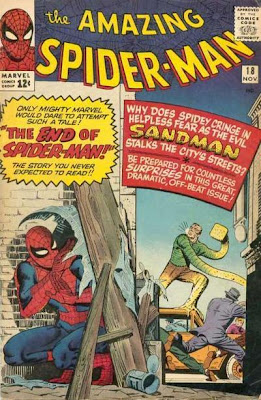 
What Happened: With the world thinking he's a coward, his social life in shambles, his Aunt May falling ill, and unable to cash in on his alter ego, Peter Parker decides to quit being Spider-Man.

Why It's In The Top 50: Spiderfan001 explains why this is his favourite "Spider-Man quits" story:


One has to appreciate how bizarre this issue must have been to the average superhero comic reader back in 1964.  There's no epic confrontation with a supervillain, no grand triumph for the hero, and nothing gets resolved at the end. All Stan Lee and Steve Ditko do is drag Spider-Man through the mud.  His girlfriend Betty Brant leaves him for the more stable Ned Leeds, he can't afford his aunt's medicine, and his fear of leaving his aunt alone causes him to stop taking risks as Spider-Man, allowing J. Jonah Jameson to convince the public that he's a coward.  Spidey's money troubles lead him into a series of humiliating encounters as he first tries to sell his image to a trading card company (he gets smoke blown in his face) and then by trying to sell his web fluid formula (the scientists brush him off when they learn that it disolves after an hour).  The anxiety, heart ache and humiliations Peter goes through this issue are the ones that we all experience at some point in our lives, and by the end Peter has one of those moments where he's ready to call it quits.

This issue is also expands on Aunt May's character, containing one of the first instances that hints that the character possess an inner strength that would only be expanded upon by future creative teams.  And finally, Jameson is hilarious in this issue, thanks to a perfect combination of Lee's dialogue and the grotesque way Ditko draws him when he's happy.

What others say: Al Sjoerdsma of spiderfan gave this issue a perfect score.  Sam Ruby gave this issue an 8/10. It was #48 on CBR's list of the Top 50 Spider-Man stories. Mark Ginnochio praised Amazing Spider-Man #18 as the moment became a character instead of a story device.


Related Stories: Peter quits being Spider-Man once again in the iconic Amazing Spider-Man #50 and about a million times after that.


Did you know?  This issue marks the first appearance of supporting cast member Ned Leeds.  Anna Watson is erroneously referred to as Mrs. Watkins.