And now we're in the top twenty on the list of the best Spider-Man stories ever. 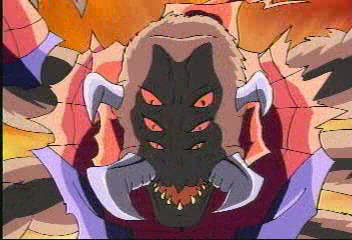 What Happened: We all know that a radioactive spider bite gave Peter Parker his powers, but what if his transformation didn't stop there?  What if he continued to change until he lost all traces of his humanity?  This is precisely the predicament Spidey finds himself in in season 2 of the Fox animated series.  Spider-Man must race against time to find a cure for himself before it's too late. The appearances of Morbius, Blade and Kraven the Hunter don't make things easier for him.


What made this story arc cool was how John Semper and his team were able to incorporate so many classic comic book storylines into the show while still telling their own original story.  Neogenic Nightmare contained several twists and turns, the most memorable being when Spider-Man actually turned into a Man-Spider and remained that way for an entire episode.  Whenever the subject of Spidey comes up amongst my non comic reading friends, it's a moment they still remember.  That's Marvel animation done right.

What others say: "Amazing Spidey" of Marvel Animation Age gave the story arc a generally positive review. Chris Summins of Topless Robot declared the Punisher, Morbius VS Blade and Hydroman portions as amongst the show's five worst episodes.

Did You Know? Blade's guest appearance in this storyline convinced Avi Arad that the character could be the lead in his own film series. And the rest is history. The success of Blade led to the X-Men, Spider-Man and Avengers films, and is credited with helping Marvel escape bankruptcy. 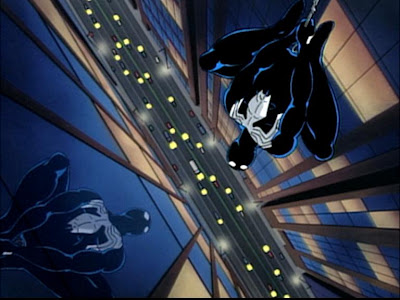 
What Happened: Astronaut John Jameson unknowingly brings back an alien symbiote on a return trip from the moon.  When the symbiote causes Jameson to crash his space shuttle into the George Washington Bridge, it's up to Spider-Man to save him and his partner.  The symbiote secretly attaches itself to Spider-Man as he's rescuing the astronuats and soon makes its presence known in the form of a new black costume that enhances all of Spider-Man's abilities.  Though helpful at first, it quickly becomes apparent that the symbiote is influencing Peter's behaviour by increasing his aggression.  Spider-Man is eventually able to rid himself of the symbiote, which then finds a new host in disgruntled journalist Eddie Brock, who blames Spider-Man for everything that has gone wrong with his life.  Together, Brock and the symbiote become Venom, a being obsessed with revenge and armed with the knowledge of Spider-Man's true identity!

Why It's In The Top 50: Mister Mets considers the impact of the storyline.


In many ways, these three episodes were an improvement over the alien costume saga in the comics. A lot of the thing fans associate with the story originated here, such as the suit making Peter Parker simultaneously stronger and more aggressive, and Eddie Brock's career-ending rivalry with Peter Parker.


It's rare when an adaption of the source material becomes more influential then the source material itself, but that's exactly what happened with these three episodes of the Fox series which gave Venom a less convoluted origin.  My favourite episode of this storyline would have to be part 3, where Venom essentially tortures Peter by infiltrating every aspect of his life.  This episode established Venom as a force to be reckoned with and really made you root for the severely outmatched Spider-Man. 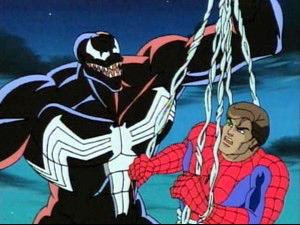 What the pros say: Producer/story editor John Semper discusses this story's troubled development in an interview with Marvel Animation Age:

From the start, we knew we had to do Venom and Carnage, because at that time they were the biggest things in the Spider-Man universe. I can't take credit for the final Venom result. It was a group thing. Everybody had a hand in it -- at that point I wasn't in as much control of the series as I would be later. Everybody was all over me, led by Avi Arad -- and I just had to slog it out. We had a few aborted drafts of the first Venom script. Len Wein wrote the first draft, delivered it VERY late, almost got me fired because of his tardiness and then we ended up throwing it out and starting from scratch.

Nothing of Len Wein is left in that episode except his credit. I don't remember who did the bulk of the later drafts. I know I did a lot of writing on it, as did Stan Berkowitz. Mark Hoffmeier probably had some piece of it -- he had a hand in most of the early good scripts. "Venom Part 1" was just this political football that kept getting passed from person to person. Then, when the first part was settled, we went into slogging our way through part two. I remember coming up with the idea that part two ought to be like Hitchcock's "Strangers on a Train" with Eddie Brock following Peter like Robert Walker did in that movie. So we did that. Then at some point I started to feel like we hadn't really milked the Venom franchise for all it was worth. Ultimately, I pitched the idea to Avi Arad that we ought to do a "middle" part with the black suit. So many fans were asking about the black suit that it seemed like it would be a shame not to do it, so part two became part three and we hurried to get a new part two stuck in the middle. Those were hectic times.

What others say: "Amazing Spidey" of Marvel Animation Age gave the storyline a positive review. This time, Chris Summins of Topless Robot declared the Alien Costume saga to be the series's high point. 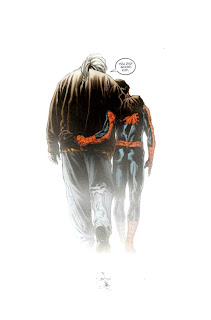 What Happened: The Green Goblin breaks himself and five other Spider-Man villains out of the Triskelion and leads them in an assault against Peter Parker.  With S.H.I.E.L.D. and the Ultimates embroiled in problems of their own, Spider-Man is left alone to defend his family and friends against his greatest foes, after accidentally taking a bullet from the Punisher.

Why It's In The Top 50: Spiderfan001 explains what this story did right in an excerpt from his review:


As far as last stands go, what Brian Michael Bendis gave us here hit all the right beats. If you had a checklist of what to expect from this type of story I'm confident you could check every box. Spidey manages to save his family and the entire neighbourhood, take down a supercharged version of his greatest enemy, share a last kiss with Mary Jane, and die surrounded by loved ones as a crowd of onlookers bare witness to his heroic actions. Bendis rushes through these moments at a breakneck pace, rarely giving the reader a moment to breathe. All the while Mark Bagley delivers his usual excellent artwork. It may not have offered much in the way of surprises, but as fans, did we really want to see Spidey go down any other way?

What others say: Tony 'G-Man' Guerrero of comicvine gave the last issue of this storyline a positive review. "The Death of Spider-Man" was #27 on CBR's list of the best Spider-Man stories.

Elsewehere on Spider-Man Reviews: Mister Mets argued that the storyline was Brian Michael Bendis's attempt to tell the Death of Gwen Stacy for a 21st Century audience.

Related Stories: The reactions to Spider-Man's death by his supporting cast and the general public, as well as the debut of Peter Parker's replacement, Miles Morales, can be found in Ultimate Comics Fallout #1-6.  Miles Morales is the star of the current volume of Ultimate Comics Spider-Man.  The original Spider-Man is currently visiting the Ultimate Universe in the Spider-Men miniseries.
<<PREVIOUS NEXT >>