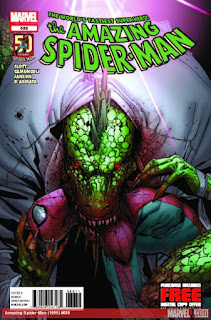 While there may be a number of mixed reviews regarding this issue online, I say this is the best issue in a while, especially since Ends of the Earth.

With the new Spider-Man movie coming out, it is rather appropriate that the Lizard be reintroduced into comics, just to add to the hype.

The Story
As we all know, this takes place right after the Ends of the Earth story. This issue wastes no time as the first page shows Spider-Man throwing numerous punches at the Lizard.  As they fight, Spider-Man recalls their last encounter, and remembers how the Lizard left the fight along with a dozens of civilians under his control.

In the midst of the fight, Spider-Man is thrown into a pile of bones ( that of the civilians)

The issue then moves eight hours earlier, when Horizon Lab's little submarine ship is docking. Everyone is grateful to them for helping to save the world. Peter is among them. He, and his colleagues receive an invitation for a celebration at Mary Jane's new club.

At the club, Peter and MJ go outside and have a heart to heart chat. MJ also tells Peter that his, 'No one dies' policy is ridiculous ( Thank You). Just then, Carlie calls, saying she has something Spider-Man may want to see.

It turns out that Billy Connors ( the lizard's son) dead body was stolen. After hearing the description of the 'body stealer' Spidey goes to confront Morbius. Spider-Man is furious that Morbius would steal a kid's body. Morbius explains however that he needed the DNA to cure The Lizard. 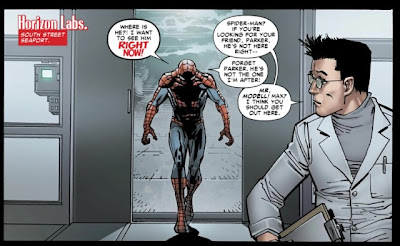 The story flashes back and forth to the fight between Spider-Man and the Lizard, while telling the story of what took place eight hours ago.

Anyhow, Spider-Man, Morbius, Max Modell and some others decide to try Morbius' cure. Together they hunt The Lizard, and cure him. Don't get me wrong, there is actually some really nice action and teamwork between Morbius and Spider-Man, but to cut it all short, The Lizard is finally reverted to his human form.

Epilogue of some sort...
Though the lizard has physically reverted to human form, the mind of Dr Connors is not really there. All that is left is the mind of the Lizard, who is not very hungry for revenge.

Thoughts
One slight problem that some people complained about was the writing style of this issue- the flashing bakc and forth between timeline's. Honestly, I had no problem with that.

While I did not mention this earlier, the charge by Mayor Jameson against Horizon has been temporarily withdrawn. However, Morbius has got to leave the lab. At first, Max, being a good friend of Morbius refuses. However, he does tell Morbius to leave the lab after he had desecrated Billy Connors grave.

Finally, we have the most awkward moment for Peter - finding out that his two exes have been chatting about him. That has got to be the strangest thing on earth. poor guy... 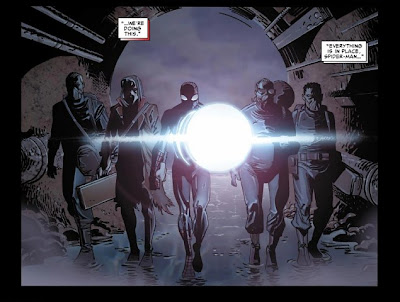 Amazing spider-man # 688, Dr Connors, No turning Back, review, The lizard